Success in Astronomy? Some Surprising Strategies

What do you think it takes to succeed in astronomy?  Some innate brilliance?  Hard work?  Creativity?  Great communication skills?

What about writing lots of short papers?  For better or for worse, one’s success as an astronomer is frequently measured in the number of papers one’s written and how well cited they are.  Papers are a crucial method of communicating results to the rest of the astronomy community, and the way they’re written and how they’re published can have a significant impact on the number of citations that you receive.

There are a number of simple ways to increase the citation counts on your papers.  There are things you might expect: if you’re famous within the community (e.g. a Nobel Prize winner), or are in a very hot topic like exoplanets or cosmology, you’ll tend to get cited more often.  There are those that make sense:  papers that are useful, such as dust maps, measurements of cosmological parameters, and large sky surveys often rank among the most-cited papers in astronomy.  And then there’s the arXiv, a preprint service that is highly popular in astronomy.  It’s been shown that papers that appear on the arXiv are cited twice as much as those that aren’t, and furthermore—those at the top of the astro-ph list are twice as likely to be cited than those that appear further down.

But what about paper length?  Is it better to write many shorter papers, or write a single treatise?  The author of today’s paper sought to try and answer precisely this question, and analyzed the length of papers published between 2000-2004—a period during which page counts could be obtained for papers on the astronomy abstract database (ADS), and the papers had been published far enough in the past for the papers to mature by 2008, the year that today’s featured paper was written.

The author looked at papers written in the four largest journals:  Astronomy & Astrophysics (A&A), Astronomical Journal (AJ), Astrophysical Journal (ApJ), and the Monthly Notices of the Royal Astronomical Society (MNRAS).  Taking out one-page papers (typically errata or editorials), his final sample contained about 30,000 papers.  The range of paper lengths for these papers are shown in Fig. 1.  There are a significant number of 4-page papers—these are letters (which are capped at 4 pages) submitted to ApJ and A&A.  The number of papers peaks at about 6 pages, and decreases for longer papers. 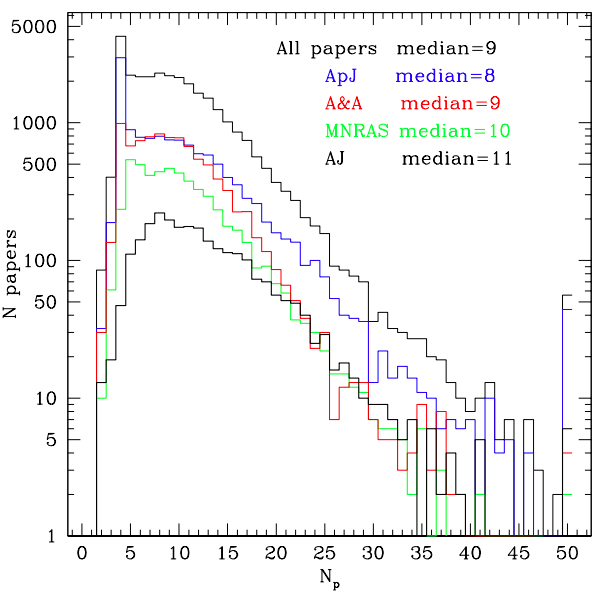 Fig. 1. Number of pages in astronomy papers published from 2000-2004.  Most papers are between 5-10 pages long; the median page count is 9.  The different colors denote the different journals in which the papers were published.  Figure taken from today’s paper. 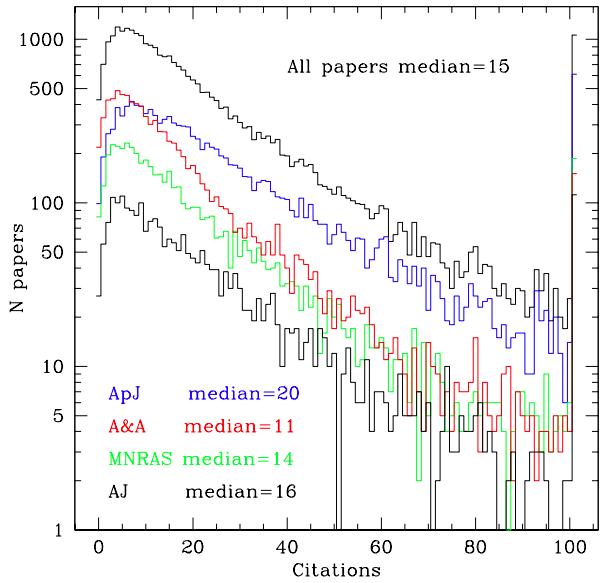 Fig. 2. Number of pages in astronomy papers published between 2000-2004. Figure taken from today’s paper.  The median number of citations is about 15.  Again, the colors denote the different journals to which astronomy papers are published.

Putting these all together:  as you might have expected, shorter papers—which presumably tend to have less content—tend to have fewer citations.  Papers between 2-3 pages long had a median of 6 citations, whereas longer papers about 50 pages long had a median of 50 citations.  Presumably this is because longer papers tend to have more content, and thus are more likely to be cited.  When phrased in terms of citations per page, there is a notable peak in 4-page papers, which have ~4 citations/page.  The median, in comparison, was only about 1.5 citations/page. 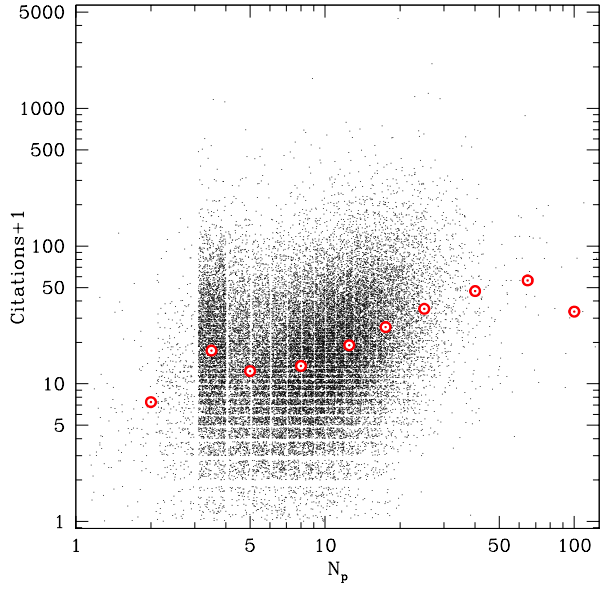 Fig 3. Number of pages vs. number of citations.  The number of citations increase with the length of the paper, presumably because longer papers cover more ground and thus can be cited by a larger range of work.  There is an upturn for 4-page papers (likely letters).  Red dots denote the median number of citations for papers that fall within a given range of page lengths.  One citation has been added to all papers to avoid plotting zero citations on a log log scale.  Figure taken from today’s paper.

The bottom line?  The takeaways aren’t manifestly clear, but the author takes the opportunity to provide some semi-humorous career advice (for some more serious career advice, see some of our previous posts here and here, as well as this article).  For graduate students, the number of first-author papers you’ve published can play an important part in early job and fellowship applications.  This means writing many papers—and posting them to the arXiv at 2pm so that they’re high on the list—is helpful, without regard to paper length or number of citations.  Later on, when we take on the onus of paying to publish, which is often per page, we can optimize the number of citations per dollar by publishing shorter papers.  For those more advanced in their careers, when the number of citations per paper becomes important (due to a measure of productivity called the h-index), writing longer papers can be more important.  All that said, this isn’t a cut-and-dry formula to producing high-impact papers—Fig. 3 shows that there’s a large spread in the number of citations for papers of a given length.

There are many paths to success in astronomy.  But there are some surprising strategies that can help you gain recognition for your work, and increase the odds of career success later on down the road.