“Our human eyes are the tools that peek at the secrets of the night sky”, so said the ancient Chinese astronomers who witnessed the supernova of the Crab Nebula in 1054 AD. But the heavens only truly light up through the lenses of telescopes, allowing us not only to peer into, but also to peel away, the mysteries of our Universe. We started out in 1609 with Galileo’s 37 mm refracting telescope, proceeded to Newton’s 150 mm reflecting telescope in 1668, and leapfrogged to William Herschel’s 49 inch (125 cm) reflector in 1789, which held the record as the world’s largest telescope for the next 50 years. Two hundred years later, not only do we have artificial eyes in space constantly staring deeper into the infancy of the Universe, we also have all sky maps in various wavelengths of light and larger telescopes from the ground, with bigger and more ambitious programs already lined up for the next five to ten years. As an astronomer in training, I never fail to be amazed by the giant leaps we have made over the course of human history.

Even so, we are still only scratching the surface.

Astronomers are not strangers to sky surveys. Among the tens of sky surveys, the Sloan Digital Sky Survey (SDSS) is probably the king of them all (see this bite for a historical overview), having been in operation since 2000, with WISE and ROSAT chasing its tail for being truly all-sky. However, all surveys to date, both full- and partial-sky, have been imaging surveys. There is no yet a full-sky spectroscopic survey — at least not until SDSS-V.

SDSS-V is an all-sky spectroscopic survey planned for 2020 after the end of the currently ongoing SDSS-IV eBOSS survey. It will conduct multi-object spectroscopy of around six million sources in both the optical and near-infrared bands, pioneering the age of panoptic spectroscopy. Things get better than that: it will ride the recent waves in time domain science by taking spectra of one million sources at multiple epochs. For its last selling point, SDSS-V will also carry out the largest integral-field spectroscopy (IFS) mapping of the sky — a contiguous sky area of 3000 deg2 in contrast to the current ~0.5 deg2. Figure 1 summarizes the science and operation concepts behind SDSS-V. 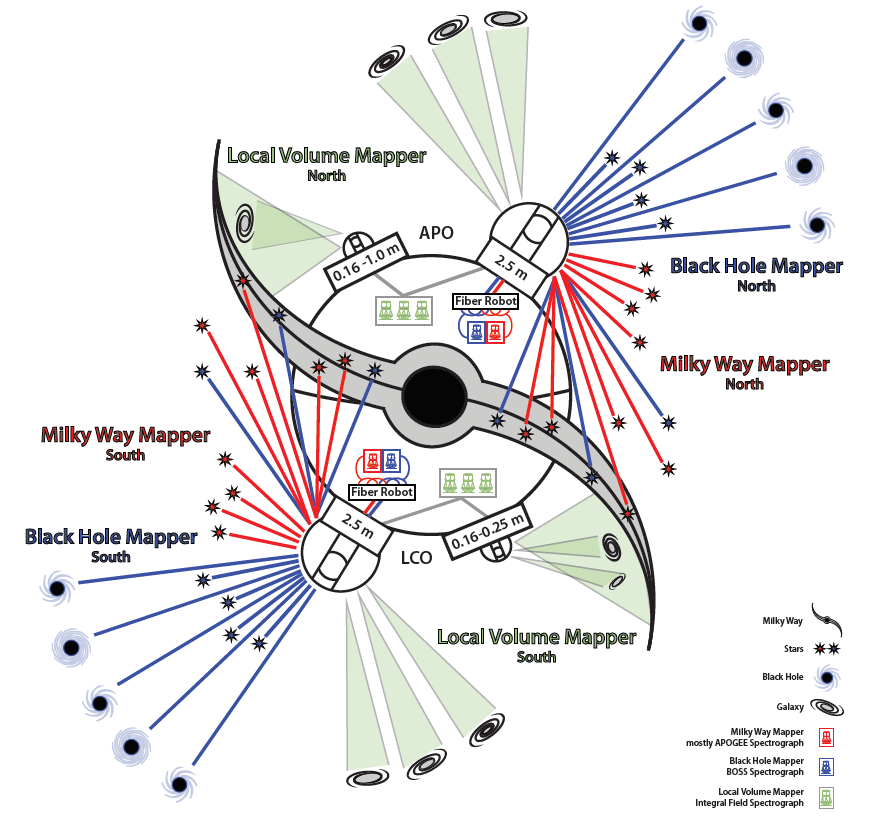 Figure 1: A schematic of SDSS-V, an all-sky spectroscopic survey. The main science programs are the Milky Way Mapper, the Black Hole Mapper, and the Local Volume Mapper. Observations will be carried out in both hemispheres using telescopes at the Apache Point and Las Campanas Observatories. [Figure 1 in paper]

There are three science programs at the heart of SDSS-V: the Milky Way Mapper, the Black Hole Mapper, and the Local Volume Mapper. The Milky Way Mapper will tackle the uncertain areas in galaxy formation physics by utilizing the Milky Way as a model organism. To do this, it will measure the properties of millions of stars (such as mass, age, chemical composition, and internal structure) in our Galaxy, focusing on the plane of the disk and the bulge where most stars lie. The program will also target tens of thousands of multiple-body systems to study stellar multiplicity and their environmental dependence. Due to the ubiquitous presence of dust in the Galactic disk, observations will be carried in the near-infrared as dust is practically transparent at these wavelengths. Figure 2 shows a comparison of the target density for SDSS-V and SDSS-IV.

Figure 2: A comparison of the target density for SDSS-IV and SDSS-V. The different colored dots for the SDSS-IV fields are from various sub-SDSS-IV surveys, with black regions indicating no observations. Darker regions in the SDSS-V map have higher target densities. [Figure 2 in paper]

The Black Hole Mapper program aims to test various quasar models with large samples of precise measurements. Using the method of reverberation mapping, it will measure black hole masses of thousands of quasars, a factor of 25 increase in the sample of black hole masses, and to measure the spectral variability of tens of thousands of quasars to further constrain quasar models. The program will also help advance our understanding of the X-ray sky by identifying the optical counterparts for the upcoming eROSITA X-ray survey.

Both the Milky Way and Black Hole Mappers will reuse current SDSS instruments. The infrared spectrograph used for the SDSS APOGEE survey and the SDSS BOSS optical spectrograph will be repurposed for the Milky Way and Black Hole Mapper, respectively. On the other hand, new infrastructure will be used for the Local Volume Mapper, an ambitious program to map the interstellar medium (ISM) of local group galaxies in a wide range of resolutions to resolve star formation structures. It aims to investigate ISM and star formation physics, with an eye to dig at the physical origins of various empirical stellar-ISM correlations. To produce its ISM map, the program will conduct integral field spectroscopy across 3000 deg2 of the sky. Figure 3 shows the range of spatial scales for the Local Volume Mapper.

Figure 3: The range of spatial scales that will be sampled by the Local Volume Mapper. The best IFU data typically have resolutions of hundreds of parsec, whereas SDSS-V will achieve parsec-scale resolution. The bottom panel is a zoom-in of the top panel. [Figure 9 in paper]

As touched upon earlier, SDSS-V will take advantage of many of its current technology. Nevertheless, to achieve its high target densities, we will have to bid goodbyes to the plug plate system that is so idiosyncratic to SDSS and say hello to a suite of robotic fiber positioners. The survey will be carried out in both hemispheres, with identical instruments housed at the Apache Point and Las Campanas Observatories. In the future landscape of sky surveys, SDSS-V will carve out a unique survey space by being the only all-sky, multi-epoch, and multi-band spectroscopic survey. Rather than competing with future surveys like TESS and Gaia, it will help multiply their science, as well as serve as an important model towards a spectroscopic counterpart to LSST. So heads up, fellow astronomers! The 2020 landscape of astronomy promises to be exciting.