It has been a big year for gravitational waves — from winning the Nobel prize to being named the scientific breakthrough of the year. But according to Gabriela González, the best is yet to come.

González is a professor of physics and astronomy at Louisiana State University and the spokesperson for the Laser Interferometer Gravitational-Wave Observatory (LIGO) from 2011 through early 2017. She was awarded this year’s Bruno Rossi prize for the first direct detections of gravitational waves, for the discovery of merging black hole binaries, and for beg 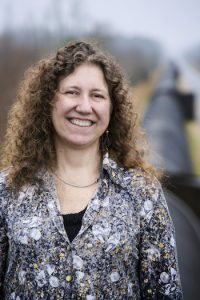 González recalls being captivated, even at a young age, by the ability to explain the world around her using physics. This fascination inspired her to pursue a career in the field. While at the University of Córdoba for her undergraduate degree, González worked in theoretical general relativity and fell in love with the subject. Soon after arriving at Syracuse for graduate school, González began a small summer project with a new professor, Peter Saulson. This project explored the possibility of detecting small ripples in spacetime, also known as gravitational waves. González recalls being immediately enamored with the science and the idea of physically testing fundamental theories of relativity.

The timing worked out well for González, and she was able to see this theoretical phenomenon become a true detection throughout her career. On September 14, 2015, LIGO  made the first direct detection of gravitational waves from a merging black hole binary system. González remembers waking up to multiple emails that day about the initial discovery, and she recalls spending the first few hours ruling out a fake injection by the LIGO team. It quickly became apparent that this was real, and it was especially gratifying for González, who has spent many years focused on the high non-Gaussian noise of interferometers.

González says that much of her impressive career is due to her choice to “follow her passion” in physics. Trying to understand the detection of gravitational waves was a major gamble when she was a graduate student, but it paid off big time.

Most importantly, González says that this is just the beginning. LIGO will be turning on again next year with improvements to the laser and pipeline for increased sensitivity. Her keynote, titled “Gravitational Waves Astrophysics,” will both review what LIGO has seen and the multitude of science to come. As González puts it: “It’s going to get better and better…you made this discovery..so now what? Now is the most exciting.” Be sure to check out her talk at 4:30 PM on Wednesday, 10th January at #AAS231!