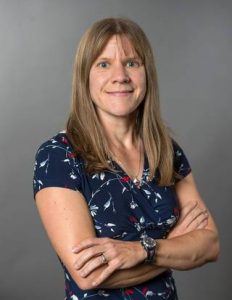 Imagine being one of the first handful of people who knew about one of the most momentous astronomy discoveries in recent history — the detection of gravitational waves from two colliding neutron stars. Dr. Colleen Wilson-Hodge, Principal Investigator (PI) of the Fermi Gamma-ray Space Telescope’s Gamma-ray Burst Monitor (GBM) and the #AAS233 HEAD Rossi prize recipient, was one of this handful.

GBM’s alert system triggered on a gamma ray burst detection around 7:00am Central Time on August 17th, 2017. Not coincidentally, the alert system of the Laser Interferometer Gravitational-wave Observatory (LIGO) had triggered just 1.7 seconds earlier. The nearly-concurrent triggers caught the attention of a LIGO scientist, prompting a “wake up” email to the GBM team. What followed was a day full of “frantically checking my phone at break…to see what was happening,” recounted Dr. Wilson-Hodge, since she was stuck in a training all day. She recalled many of her team working from home in pajamas, not having had time to get dressed. Results from optical telescopes began to trickle in as the hours passed, and it was soon clear — astronomers had finally discovered a kilonova, or the merger of two neutron stars.

Now a distinguished astrophysicist at the NASA Marshall Space Flight Center, Dr. Wilson-Hodge described her path into astrophysics as atypical. She earned an undergraduate degree in physics from the University of Arkansas. While there, she participated in a cooperative education experience (or “co-op”) and spent a semester working for NASA Marshall on holography. During her second co-op, she worked on the BATSE instrument on the Compton Gamma Ray Observatory. She continued to work for NASA after she completed her bachelor’s degree and through graduate school at the University of Alabama in Huntsville, where she studied x-ray radiation produced by accreting pulsars. Her involvement with Fermi began shortly after graduation, when she became involved in the testing and instrumentation of GBM. After the telescope’s launch, the work was especially demanding. She even “drew the short straw” one year and had to work over Christmas. Her hard work paid off, and she was designated the PI of GBM in 2016.

As the PI of GBM, Dr. Wilson-Hodge’s work and leadership during the 2017 kilonova discovery earned her the Rossi prize. Her day-to-day work consists of organizing and coordinating team members, improving software to find fainter gamma ray sources, thinking about future missions, and preparing for the upcoming LIGO run starting in March 2019. As a scientist, her interests still lie in x-ray astronomy and accreting pulsars. In 2011, she led a team that used GBM to demonstrate that x-ray signals from the Crab pulsar decreased in flux by 7% from 2008-2011. This was an important result because scientists had previously thought that the Crab pulsar was unchanging and even used it for calibrations! Looking forward, Dr. Wilson-Hodge says she is most excited to see what a merger of a black hole and a neutron star looks like. She also would like to know whether there are any situations in which a black hole-black hole merger produces light, spurred by an intriguing GBM alert just 0.4 seconds after the first LIGO detection on September 14th, 2015. However, neither experiment could pin down their sources’ locations accurately enough to determine whether the signals originated from the same source.

When asked about any advice she would give her younger self, Dr. Wilson-Hodge reflected on her own experience accepting a job at NASA’s Marshall Space Flight Center after graduation. She worked at Marshall as both an undergraduate and graduate student and said that moving directly into a post-graduate position “made it harder to be perceived as a full-fledged scientist” since she had worked there for years as a student. Not only does working in a new place offer fresh perspectives, but it also allows former professors and coworkers to begin viewing you as a colleague. Dr. Wilson-Hodge also emphasized the value of asking questions. As a PI, she says it’s “important to know what I know, and who knows what I don’t know. You don’t have to know everything!”

If you’re interested in hearing more about Dr. Wilson-Hodge’s work, check out her plenary talk at 4:30pm on Tuesday, January 8th at #AAS233!