Capturing neutrons in the thin disk

The evolution of the Milky Way holds a place of special importance for us, because many aspects of it are easier to study than in other galaxies, and, after all, we live in it. From our vantage point, we can observe up-close the nitty-gritty of the galactic assembly process, and come to understand how the formation of our own solar system is intimately tied to the Galaxy’s long and storied dynamical and chemical history. In today’s bite, let’s focus on an aspect of the Milky Way’s chemical story.

The heaviest elements—the platinum in dental fillings, the xenon in fluorescent lights, and the gold in buried treasure—are predominantly produced by neutron-capture processes. Neutron-capture is nature’s sneaky way of producing elements heavier than iron, despite the extra energy cost and the strongly-positively charged nucleus which makes it hard to pack outside protons onto a nucleus. A neutron can zip through the swarm of an electron cloud and stick to a positively-charged nucleus, because the neutron has no charge of its own. After some time, the neutron decays into a proton (plus some other products). The new proton stays in the nucleus because it is now bound by other forces which are stronger than the Coulomb repulsion.

Fig. 1: A comparison of lines in the r-process-weak star HD122563 and the r-process-strong star HE 1523−0901. The narrow and crowded atomic lines often require high-resolution spectroscopy to disentangle the r- from s-process history of the star’s chemical makeup, which means large telescopes, long integration times, and consequentially small sample sizes of Cepheids. (Fig. 2 in Frebel, 2008.)

The s-process can readily take place in some stellar interiors. The main s-process channel occurs inside asymptotic giant branch (AGB) stars, which pulsate and breathe out winds of heavy elements. The r-process takes place in more violent events which mash nuclei and neutrons together at extreme neutron densities. Just a few months ago, observations of the neutron-star merger GW170817 led to the first evidence that neutron star mergers could be the main source of r-process elements in the universe! That’s right—the platinum in dental fillings, the xenon in fluorescent lights, and the gold in the buried treasure lying buried and undiscovered in your backyard—were mostly produced in neutron star mergers.

Cepheid variable stars serve an important role as “standard candles” to measure distances within the Milky Way because (to first order) their variability period corresponds to their average luminosity. (Check out the details in this Astrobite.) Cepheids are also fairly young (compared to lower-mass pulsators like RR Lyraes), and trace relatively recent populations. The authors of today’s paper targeted Cepheid variables for abundance measurements by using the Ultraviolet and Visual Echelle Spectrograph (UVES) at the Very Large Telescope (VLT) at Cerro Paranal to take high-resolution spectroscopy of 75 Cepheids near the Galactic plane and in the Milky Way’s thin disk. (See Fig. 1.)

It’s not easy to take high-resolution spectroscopy of large numbers of Cepheids, because it usually requires long integration times on big telescopes. The authors increased their Cepheid sample to 435 by adding in similar samples from the literature and rescaling the values to account for systematic differences among the studies. Then, together with measurements of iron (Fe), the authors measured the abundances of elements yttrium (Y), lanthanum (La), cerium (Ce), neodymium (Nd), which are preferentially produced by the s-process, and europium (Eu), which is produced by the r-process.

They find that there is indeed a radial gradient to these elements: the further away from the Galactic center you are, the smaller the proportion of neutron-capture elements (Fig. 2). Noticeably, yttrium (element Y) abundances decrease much more rapidly than the others. 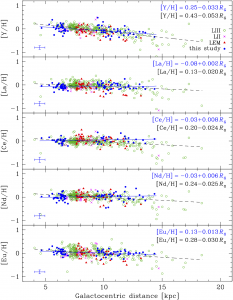 Fig. 2: Neutron-capture elements as a function of distance from the Galactic center. Different colors correspond to the different sources of the Cepheids in the dataset. The Earth is at a galactocentric distance of about 8 kpc. (Fig. 2 in today’s paper.)

Abundances of La and Eu as a function of radius are consistent with enrichment models that consider the thin disk to have been created by slowly-infalling matter, after an earlier infall created the Milky Way’s thick disk and halo. But the odd behavior of Y seems to indicate the presence of additional production channels, possibly stimulated by the more metal-rich environment in the center of the Milky Way, and seems consistent with models of AGB s-process production.

Additionally, in environments more iron-rich than the Sun, the neutron-capture elements tend to decrease relative to iron. This indicates the effect of Type Ia supernovae in those environments.

Interestingly, the authors are also able to add a time dimension of a few hundred million years to their findings, because a Cepheid’s period is also a function of its age. Indeed, the element-to-hydrogen abundances increase with increasing stellar age. However, the element-to-iron abundances are very weak functions of age, which suggests a homogeneous enrichment of heavy elements in the thin disk with time.

More detail will be painted into this picture in the coming years. The Gaia mission, for one, will be a big help by uncovering many, many more Cepheids. Then we’ll get closer to answering questions like, How exactly was the Galaxy assembled? What are all the channels of heavy element production? How are they influenced by the local stellar environment, and how do they feed back into that environment? How do they influence the evolution of planetary systems and cause us to be, or not to be?