In 1835, the philosopher Auguste Comte wrote that “we shall not at all be able to determine [stars’] chemical composition or even their density.” A few decades later, it turned out that Comte was wrong, thanks to a newfound ability to separate stellar light into its component wavelengths. This is called spectroscopy, and it provided the first major breakthroughs in our understanding of stars.

Stars give off light as a function of wavelength in a way that approximates a blackbody spectrum. Stellar spectra tell us about the material content of stars primarily through absorption lines that get nibbled out of “ideal” spectra when atoms (and some molecules in cooler stars) absorb photons at precise, characteristic frequencies, and spit the photons back out in a different direction and out of the observer’s line-of-sight.

More and more information can be squeezed out of spectra at ever higher resolutions and over longer wavelength ranges. Today, one cutting-edge spectrograph at visible wavelengths is the Potsdam Echelle Polarimetric and Spectroscopic Instrument (PEPSI) at the Large Binocular Telescope (LBT) on Mt. Graham in Arizona. Cunningly, PEPSI was build to take data from three different telescopes on Mt. Graham. They include 1.) the LBT itself, with twin 8.4 m primary mirrors; 2.) the nearby 1.8 m Vatican Advanced Technology Telescope (VATT) through an underground cable; and 3.) a tiny, effectively 13 mm solar telescope on the LBT patio, right next to the barbeque.

The hydra-headed PEPSI can produce spectra with a resolution of up to around λ/Δλ=270,000 between wavelengths of about 380 to 910 nm. The first deep spectral data from PEPSI are just now coming out in a set of three papers, and we’ll look at one of them, a chemical analysis of a planet-hosting star. (The other papers are here and here.)

Fig. 1: The whopping resolution of PEPSI, as shown in the spectrum of Kepler-444. The bottom is a zoom-in of a tiny region of the top plot. Note the different chemical species identifiable by their absorption lines in the bottom plot. Fig. 1 in today’s paper.

To obtain a fine-grained understanding of exoplanets, we also have to understand their host stars. It stands to reason that the composition of a host star probably has some kind of imprint on the compositions of any planets, so in this paper, the authors chose to look at a K0V main sequence star called Kepler-444 to try to infer its planets’ bulk compositions. The system is known to host at least five planets smaller than Earth, and at only 117 light-years (36 parsecs) away, Kepler-444 is one of the closest systems in the Kepler dataset. It is also very old, possibly ten billion years or so, according to previous authors.

PEPSI took spectra of Kepler-444 through the eyes of the LBT at a resolution of ~250,000, with excellent signal-to-noise (Fig. 1). Then, the authors measured the sizes of absorption lines of 18 elements and used models to determine their abundances. The final errors were 0.03 to 0.13 dex. That’s pretty darn good for that many elements at one time in one star. Interestingly, the authors found that Kepler-444 is rich in alpha elements, which are blasted into space by Type II supernovae.

The spectra also allowed them to determine surface gravity log(g) and effective temperature. They pinned Kepler-444 onto the diagram in Fig. 2 and determined its age with model tracks, or isochrones, which stars are expected to move along as they evolve. This method yielded an age of 10±1.5 Gyr.

The authors applied a simple chemical model to predict the iron mass fraction of the Kepler-444 planets. This model involves H, He, C, O, Mg, Si, and Fe, because they are thought to form the most important materials that can condense in circumstellar disks (that is, disks around stars) and eventually form planets. The authors found that the proportion of iron in the rock (specifically, iron and silicates) in the Kepler-444 planets is about 24%. However, they caution that more detailed modeling is required for more confidence. 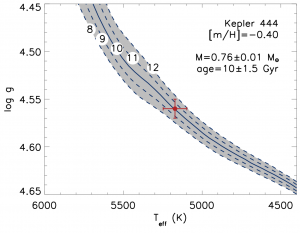 Fig. 2: The age of Kepler-444 (red point), as determined by model isochrones in the log(g)-Teff plane. The tracks are isochrones, and their ages in Gyr are indicated by the circled numbers. Fig. 3 in today’s paper.

The ~24% iron mass fraction estimated by these authors is lower than the ~30% iron mass fraction of planets in our own solar system. If this holds up with more sophisticated models, the authors suggest that this may indicate that small, rocky planets with metal-poor host stars like Kepler-444 have relatively low density.

The alpha-element-rich nature of Kepler-444 appears to be consistent with the findings of other authors that these elements may stimulate small planet formation around metal-poor stars. Does this mean that small planet formation got started in the Milky Way’s thick disk, where alpha element abundances are highest? Are alpha elements an important component of the dust that forms planets?

In any case, Kepler-444 is indeed an ancient star. This means that the young, metal-poor universe was producing planetary systems with small and rocky planets. Complex life probably requires rocky planets, so this raises the intriguing possibility that complex life evolved at a very early stage in the universe’s history.

Look at how far we’ve come since the time of Comte!

Disclaimer: This Astrobites writer is part of an instrument group at the Large Binocular Telescope, but is not affiliated in any way with the PEPSI group.