Title: Haze Production in the Atmospheres of Super-Earths and Mini-Neptunes: Insights from the Lab

Clouds and hazes: the enemies of any observational astronomer. Many astronomers have missed observing their target simply because clouds got in the way. Yet clouds and hazes are everywhere, and not just on Earth. Every Solar System body with an atmosphere, be it planet, dwarf planet, or moon, has some form of aerosol in its atmosphere, from the thick clouds on Venus, to the optically impenetrable haze on Titan, even on Pluto! So it should come as no surprise that we have observed clouds or hazes on multiple exoplanets, especially on the cooler (<800K) and smaller (Neptune-size or smaller) planets. It is difficult to decide what is to blame for “clouding out” our observations of exoplanets from theory alone. Today’s authors set out to recreate hazy exoplanetary conditions a bit closer to home.

Clouds, Hazes, and Aerosols … Oh My!

But what is the difference between clouds, hazes, and aerosols? While these terms have been used interchangeably in the past, the authors are proponents for giving them set definitions:

In this paper, the authors focus only on the creation of haze in exoplanet atmospheres.

The Importance of Experimental Exoplanetary Science

In exoplanetary science, we tend to focus on either the theory or the observations, however, there is another side that often gets overlooked – the laboratory experiments. After all, between the extreme pressures, temperatures, and largely unknown atmospheric compositions, exoplanet atmospheric conditions are difficult to create in a lab; difficult, but not impossible. As demonstrated by the authors, laboratory experimentation may prove crucial in aiding our understanding of exoplanet aerosols. Aerosols do a fantastic job masking absorption features in a planetary spectrum leaving us with a flat spectrum, as in the case of super-Earth GJ1214b (Figure 1). Since these solid aerosol particles scatter and absorb multiple wavelengths of light, we are left with no spectroscopic information of their composition. We know that a cloud or haze layer exists, but we don’t know what it is made of.

Figure 1: The spectrum of GJ1214b with the black points showing the flat observed spectrum compared to several hypothetical models for a pure methane, pure water, and pure carbon dioxide atmosphere. Any absorption features in the atmosphere of GJ1214b are masked by an aerosol layer of unknown composition. (Figure 2 in Kreidberg et al. 2014)

Aerosols play a crucial role in the temperature and atmospheric dynamics of a planet. Furthermore, they can create hydrocarbons which are necessary for habitability. We therefore need more information regarding their creation and composition if we have any hope in constraining our atmospheric models. The work done by the authors is the first step in bridging the gap between our flat spectra and theoretical models by determining the haze production rates (how fast is haze produced) in different hypothetical exoplanet atmospheres.

So How Do You Create Exoplanet Haze In A Lab? 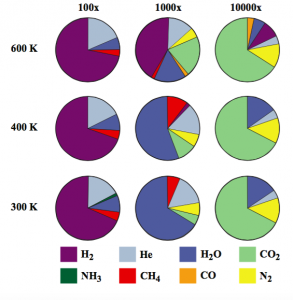 Figure 2: The starting chemical composition for each temperature and metallicity (100x, 1000x, 10000x). Each experiment contains different molecules and molecular ratios regardless of temperature or metallicity. (Figure 2 in the paper)

The authors ran each experiment through the Planetary Haze Research (PHAZER) Chamber (schematic of this setup shown in Figure 3). The gas mixture from Figure 2 is sent through the chamber heated to the appropriate temperature with the heating coil. Since we can’t use UV photons from a star, a voltage is applied to the gas to simulate the star’s energy source, which breaks down the particles. These particles then recombine forming the final haze molecules. After 72 hours, the haze particles are weighed and the haze production rate is calculated. 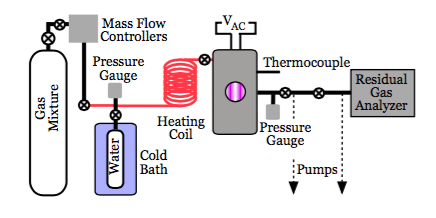 Figure 3: The experimental set-up for haze creation. The process moves left to right and takes 72 hours to complete (Figure 3 in the paper) 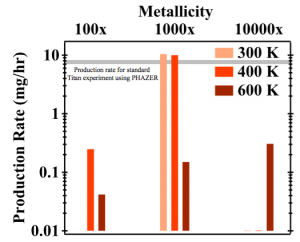 Figure 4: The final haze production rate for experiment corresponding to the starting chemistry in Figure 2. All experiments produced haze to varying degrees, but there was an immeasurable amount for the experiments of 300K/100x metallicity and 300K and 400K, 10000x metallicity. (Figure 1 in the paper)

From these experiments, the authors have clearly demonstrated that haze rates, and thus hazy atmospheres, are extremely dependent on not only the temperature of the planet, but also its chemical composition. Unfortunately, we don’t know an exoplanet’s atmospheric composition prior to planning an observation, which means we still run the risk of observing a flat cloudy/hazy spectrum. But by combining continued laboratory experiments with better informed theoretical models, we may yet be able to determine which exoplanets are most likely to have a clear atmosphere, free from hazes or clouds. And with JWST launching in the near-future, the knowledge gained from these future experiments will prove invaluable in determining the best exoplanets to observe.