Good luck getting any sleep on Jupiter! This humongous gas giant rotates faster than any other planet in the Solar System, completing a day in less than 10 hours! If you were to emigrate from Earth to the largest planet in our solar system and still aimed to get the daily 8 hours of sleep recommended for adults, that would leave you with less than two hours per day to eat, exercise, and study astrophysics. That’s not nearly enough time! Future inhabitants of Jupiter’s cloud cities should not complain, though.

When Jupiter formed, it accreted its atmosphere (over 95% of the planet’s total mass!) from the hydrogen and helium gas in the protoplanetary disk surrounding our Sun. As Jupiter ate up this gas mass, it must have begun to spin faster as it also ate up the gas’s angular momentum. Eventually, it would reach the break-up velocity, which is defined as the point when the upper layers of the atmosphere are rotating as fast as an object would if it were placed in orbit around the planet close to the surface. At these speeds, Jupiter could not possibly rotate any faster. Naively, we would expect Jupiter to still be rotating that fast today. However, if we calculate Jupiter’s rotation period based on its break-up velocity, we get that one Jovian day should not even last 3 hours!

Really, Jupiter’s inhabitants should be thankful that something was able to slow down the planet’s rotation enough for them to be able to watch the first four Harry Potter movies in one day instead of just one of them. But what?

We have long known that Saturn also rotates much slower than its break-up speed (11 hr compared to 4 hr). And as Eckhart summarized in his December astrobite, we now know gas giant exoplanets also rotate slower than expected. In today’s paper, Konstantin Batygin attempts to solve this widespread conundrum with the solution people would most expect: Jupiter’s magnetic field.

Jupiter and Saturn aren’t the only objects in the Solar System subject to this mystery. When the Sun formed, it too accreted hydrogen gas from the disk around it. As a result, we would naturally expect the Sun to be rotating even faster than Jupiter. Yet, a solar day lasts nearly a month, somehow leaving the Sun with only about 1% of the Solar System’s angular momentum – even though it has over 99% of the mass!

One way for the Sun, or any object, to lose angular momentum is to fling out some of its material. The leading explanation for why stars like the Sun spin down this way is called magnetic braking. In this process, the solar wind carries material out of the surface just like it does today. Then, some of that material will get caught on the Sun’s magnetic field lines, which expel it even further out of the Sun – taking a significant chunk of the Sun’s angular momentum with it. To conserve angular momentum, the Sun will have to slow down how fast it rotates. Can gas giant planets do this too?

Jupiter is not quite the same as a star. It doesn’t have a solar wind, so it can’t just fling out material. However, recent research on how gas giants accrete their atmospheres may offer an alternative idea.

While we used to assume Jupiter accrued gas directly at its equator, modern simulations show it actually should have collected gas from above its “North Pole” (and below its “South Pole”). As Figure 1 shows, not all of the material gets eaten by Jupiter. Some of it is deflected outward into a disk around Jupiter – called a circumplanetary disk. The disk then spills that material back into the larger disk around the star – the protoplanetary disk from which it came. This makes up for Jupiter not having a solar wind and gives it a way to fling out material and angular momentum. 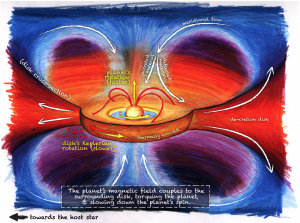 Spinning slower (due to magnetic braking), then faster (due to gravitational contraction)

Figure 2 shows the evolution of Jupiter’s rotation period (i.e. the length of its day) after it formed, with and without magnetic braking. In both models, Batygin assumes that Jupiter starts out with twice as large of a radius before gravity causes it to contract to its present-day size in about 1 Myr. He also assumes that the planet starts out rotating at the break-up velocity (about 8 hours). 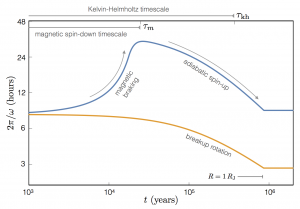 Figure 2. Jupiter’s rotation period in the first 2 Myr after it formed. Without magnetic braking (gold), it rotates at the break-up velocity, which gets faster as the planet shrinks in size. With magnetic breaking (blue), Jupiter spins down first, leaving it with about the right rotation period by the time it contracts to its current size. Fig. 3 from the paper.

Now that the model in this paper has demonstrated magnetic braking can lead to about the right spin rate for Jupiter (and Saturn too), Batygin hopes future work will explore more meticulous aspects of the problem related to magnetohydrodynamics (MHD), both with an analytic approach (like with the equations in this paper) and also simulations (which were not used directly in this model).

The astrophysicists living on Jupiter or gas giant exoplanets in other star systems will have plenty more time per day to investigate this problem. And they may have both magnetic fields and how these planets accreted their atmospheres to thank.