A very close planet that is way out of line

Status: Submitted to the AAS Journals, open access on the arXiv

However, the authors of today’s paper have discovered a transiting exoplanet with an inclination of 76.5°. This is possible because EPIC248435473 b is an ultra short period planet (USP), with a period of just 0.66 days, meaning from our viewpoint the planet still transits in front of its star over a wider range of inclination angles. What makes this discovery more interesting is that the authors have found up to 5 other transiting planets in this system, all aligned with inclinations 88-90°, making EPIC248435473 b the odd one out.

Discovering and modelling the planets 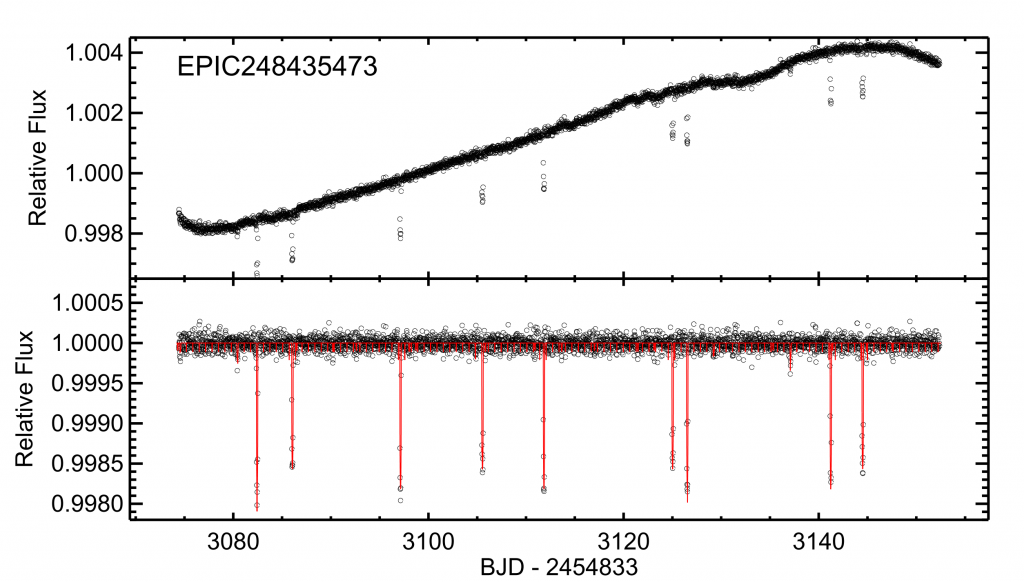 Three planet candidates (later named b, d, e) around EPIC248435473 were picked up automatically by the pipeline run on the K2 data (see Figure 1). The authors identified three additional candidates from visual inspection of the light curves. The phase folded light curves of the six potential planets can be seen in Figure 2. Only four of these planet candidates could be statistically validated, as noisier light curves were extracted to exclude a close background star, making the weakest two candidates no longer reliable. These two remained planet candidates will require more data to confirm.

Figure 2: Phase folded light curves for validated planets: b,c,d,e and candidate planets .02 and .06. All the repeating transit data from K2 is folded onto each planet’s period, combining into one transit to show the best period and quality of fit of the EXOFASTv2 model (shown by the red line).

The authors then simultaneously modelled the SED, radial velocities (RVs) and flattened K2 photometry for the system of four validated and two candidate planets using a software package called EXOFASTv2. The stellar radius and mass were inferred from the spectroscopy. Simultaneous modelling refined the system properties, including the planet masses and inclinations, to fit all the available data.

Modelling planet b was made tricker as it has a grazing transit, only part of the planet passes in front of the stellar disk, resulting in the V shape transit in Figure 2. In this case, the transit data cannot constrain the planetary radius well. As an approximation, the planetary mass found using RVs can be used to estimate the planet radius. Unfortunately the RV data is not precise enough to constrain the mass (see Figure 3), so only an upper limit is found. Using Chen and Kipping’s exoplanet mass-radius relation results in a wide possible radius distribution between 1-10 Earth radii, shown in Figure 4, with the radius most likely about 3 Earth radii. 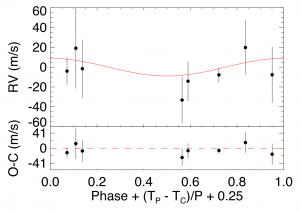 Figure 3: Radial velocity data folded on planet b’s period. RV data is not precise enough to measure the planet mass as RV error bars are quite large compared to the RV signal. Therefore only an upper limit on mass can be found. 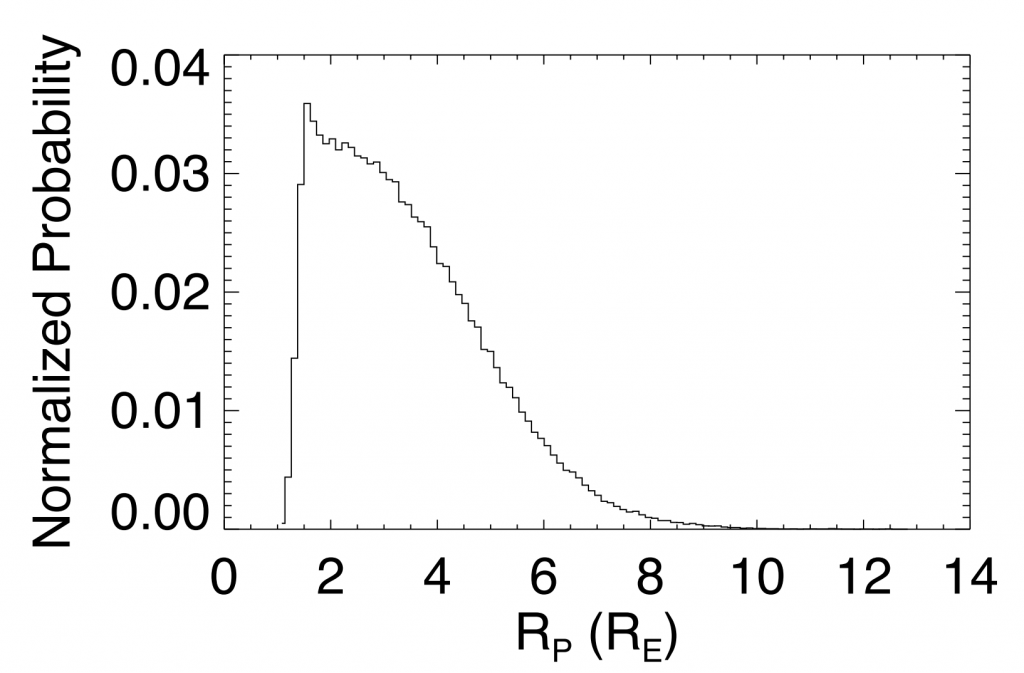 Figure 4: Probability of planet b having different radii. Transit depth sets a lower limit of 1 Earth radii while an upper mass limit comes from the non-detection of RV signal which is converted to a radius.

A misaligned planet in a multi-planet system

Explaining how EPIC248435473 b entered its short misaligned orbit is an open question. Theorists do not believe it could have formed so close to its star but must have moved in from further away in the system.

Proto-USP planets have been proposed to start in periods between 5-10 days before being gravitationally ‘tugged’ into an eccentric and inclined orbit by other planets. This orbit later circularises at the point closest to the star, but the planet stays inclined. However, the planet’s radius of 3 Earth radii, if confirmed, is larger than other USP planets and implies a dense and water-rich atmosphere that formed much further away from the star to resist the strong photoevaporation.

Additional complications arise as EPIC248435473 b is in compact system. Generally planets moved into ultrashort period orbits by this mechanism would only have companions with periods 10 days or more. Planet c and candidate .02 are closer, with periods of 6 and 7 days, so must have migrated inwards after the USP planet reached its present location.

Further observations to constrain the mass and radius of EPIC248435473 b, as well as atmospheric study, may help narrow down its formation history. The planet bulk density and atmosphere constraints on water could help restrict its origin within the disk and when it reached its current location. This information should help explain how this strange system came to exist.