The Kepler space telescope has discovered just over 2500 exoplanets to date, which is more than 70% of all exoplanets found so far.  It has discovered planets and systems vastly different from what we see in our own solar system, such as Super Earths and tightly packed planetary systems.  While both of these are quite easy to visually recognize in the data, other types of systems might not be so apparently obvious.  The authors of this paper claim to discover one such hidden planetary architecture: a population of systems whose main signature is having a short-period (~1 day), Earth-sized planet.

There are multiple types of planetary systems that Kepler has observed that can have a single observed transiting planet. Hot Jupiter systems are one such class, which is characterized by a massive, short-period planet which rarely has other planets observed in the system.  This is caused by its unique, destructive formation mechanism, where the planet migrates inward through the protoplanetary disk or is scattered inward by near collisions with other planets, which disrupts the inner planetary system.  Another type of single transiting system is merely a result of observational bias in the transit system.  If a system with multiple planets is tilted relative to Earth, or if the planets are not perfectly aligned in a flat plane, sometimes only one planet will be observed to transit. 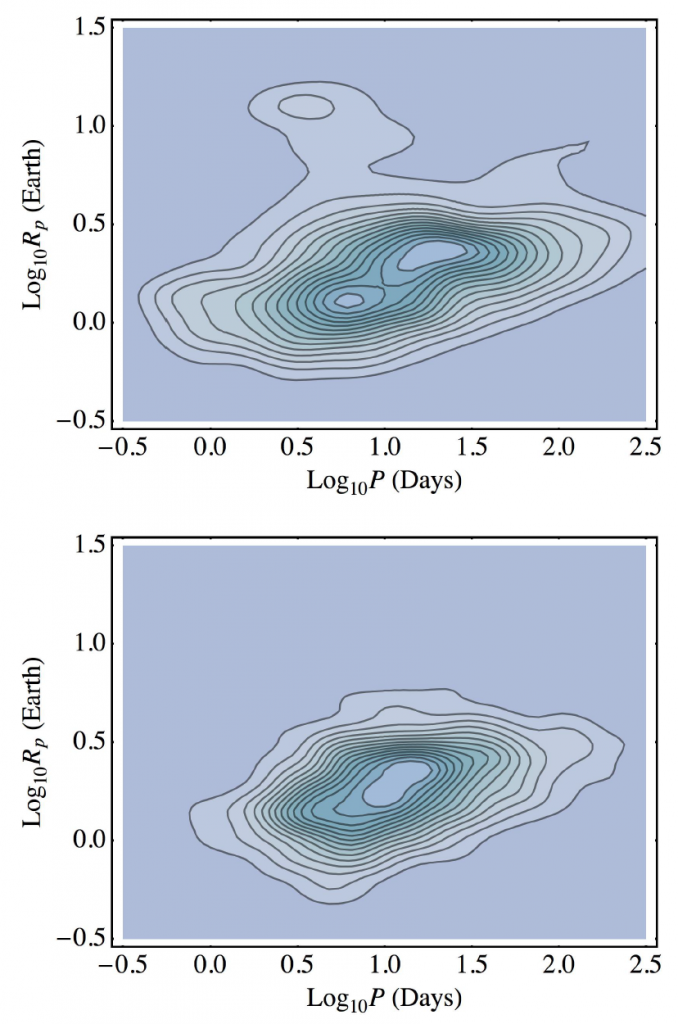 Figure 1: The period-radius distribution for single transiting systems (top) and multiplanet systems (bottom). Taking the difference of these two plots effectively highlights regions of period-radius space where the single transiting systems cannot be reproduced by randomly sampling a single planet from the multiplanet systems.

This experiment produced four regions where the period-radius distribution of planets randomly drawn from a multiplanet system did not match the distribution of single transiting systems.  One of these four regions is the Hot Jupiters, and two other regions can be explained away by biases and inherent deficiencies in this technique.  However, one region cannot be explained away: short-period, Earth-sized planets, dubbed “Hot Earths”.

The authors identify four potential origins of the Hot Earth candidates in the Kepler data.

If there truly is an excess of Hot Earths, there are a few potential causes.  They could be the evaporated cores of Hot Jupiters.  If true, this would nearly double the Hot Jupiter rate.  Conversely, two other scenarios have these planets starting out at approximately their current mass, but farther out in the system.  In one scenario, the planet migrates inward during planet formation until it hits the inner edge of the protoplanetary disk, where it stops.  In the other scenario, dynamical and gravitational interactions between planets can drive the innermost planet very close to the star.

If these Hot Earth systems are real, this adds another complication (and another test) for planetary formation models, which now need to also explain this new type of planetary architecture.