Are you doing an REU this summer? Were you working on an astro research project during this past school year? If you, too, have been working on a project that you want to share, we want to hear from you! Think you’re up to the challenge of describing your research carefully and clearly to a broad audience, in only one paragraph? Then send us a summary of it!

Alyssa is a junior at Macalester College in Minnesota studying Physics and Astronomy. This work was done during the summer of 2018 at the Physics REU at the University of Rochester under Dr. Judy Pipher and Craig McMurtry. Alyssa will be presenting her research next year at the January meeting of the American Astronomical Society.

We developed a first-order correction for signal-dependent interpixel capacitance for long-wavelength (~10 micron) HgCdTe infrared detector arrays developed for NASA’s NEOCam mission, which is designed to characterize potentially hazardous near-Earth objects (NEOs) larger than 140 meters in diameter. IPC is an image-blurring effect caused by capacitive coupling between pixels in an array. In simplified terms, a pixel that is capacitively coupled to its neighbor acts as one plate of a parallel-plate capacitor with its neighbor; the charges and thus the recorded signal in the two pixels are related. IPC was not previously known to be dependent on signal strength, but a paper by Donlon et al. (2016) provided evidence of this effect in mid-wavelength (~5 micron) HgCdTe arrays for JWST. To characterize this dependence for NEOCam arrays, we used dark exposures of one test array to measure the spread of signal from hot pixels of various signal strengths to their four nearest neighbors. We fitted an exponential functional form to this distribution and applied it to proton irradiation data taken with two test arrays in order to measure the magnitude of the correction. Preliminary examinations of these data show a 10–20% decrease in the average number of pixels affected by a single proton hit after the correction. Further exploration of the dependence of IPC on background strength will improve the accuracy of the correction. An IPC correction algorithm will be present in the data reduction pipeline for NEOCam. 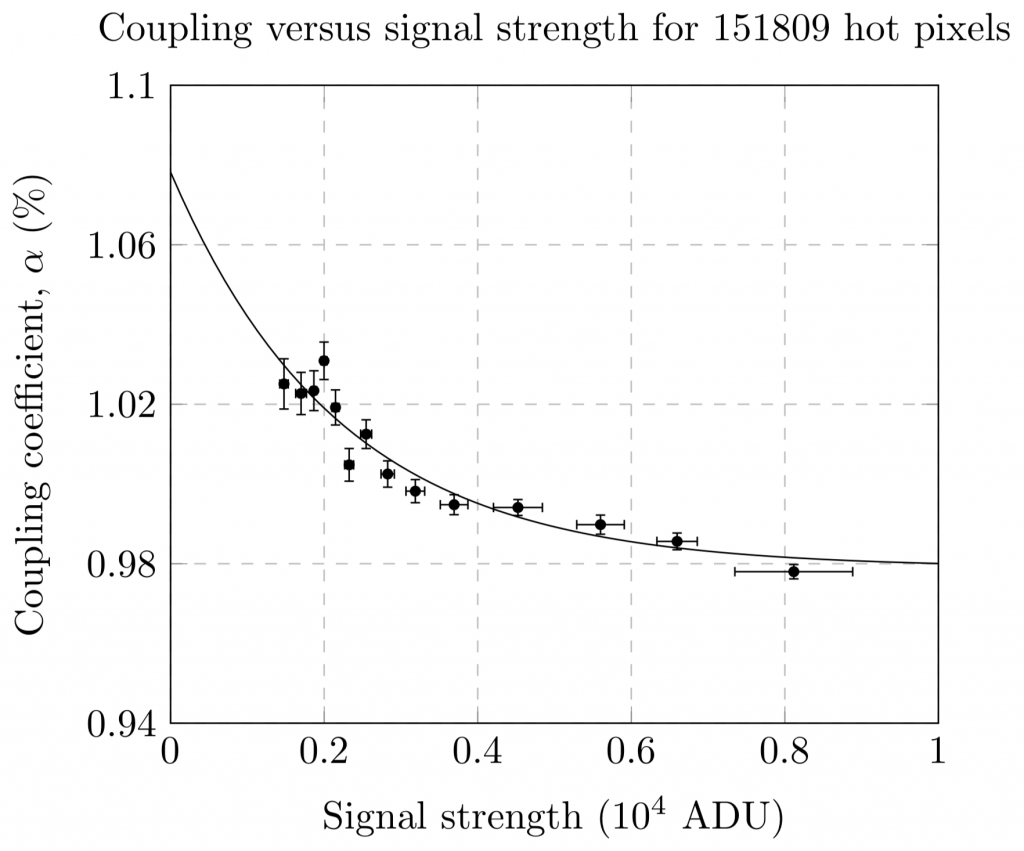 Binned averages of the amount of coupling from a hot pixel versus the signal strength of the hot pixel for the test array H2RG-18481 at 35 K with 150 mV applied bias. The coupling parameter (alpha) refers to the amount of signal which is spread via IPC from a pixel to its nearest neighbors (in percent). The signal strength is given in analog-to-digital units (ADU), which are digital counts related to the number of photons which are deposited onto a pixel. The exponential fit used in the correction algorithm is overlaid.

UR #1: Gamma-Ray Bursts and Protostars

UR #10: Star Formation and Associations