How can you tell if a young planet is migrating?

Imagine if we could watch planetary systems take shape. We would point our telescopes at the nearest and brightest newly-formed stars that are still surrounded by some of the leftover material from the cloud in which they formed. We would then see this leftover material mold itself into a disk around the star, a so-called “proto-planetary disk” made up of mostly gaseous molecules and a small, but sufficient amount of dust for building planets. Every day, we could observe each disk and watch each system evolve.

Unfortunately, many of these processes last not days, but thousands of years, or even the entire lifetime of the disk itself (3 to 10 million years). To make matters worse, planets that have just formed are often extremely difficult to spot as they are typically too small, too dim, and also enshrouded by the disks in which they formed. Both of these factors make it difficult to study the processes that sculpt planetary systems.

In particular, we cannot wait millennia to see if planets migrate away from where they formed or if they just stay where they are. This issue is of paramount importance since we cannot develop good models of how specific planets formed if we do not even know where they formed. In today’s paper, Farzana Meru et al. propose a solution to that problem by developing a new way to probe whether a planet is migrating through the disk, just from looking at observations of dust at a single point in time.

Planets are expected to migrate because both the outer and inner components of a disk exert torques on the planet. The outer component is typically stronger and drains some of the planet’s energy and angular momentum so that it sinks inwards towards its star. However, physics is rarely that simple. This basic model predicts planets will migrate inwards too quickly and ultimately get consumed by their stars. Of course, all of the surviving planets in our solar system and others easily refute that idea. And although there are many theorized mechanisms to slow down migration, the rate at which planets migrate is still an open question.

While we cannot track a planet’s distance from its star over time, we can take observations of the dust in a disk. The dust can be a good tracer of the how the planet is moving because the dust moves too!

As dust rotates in Keplerian orbits, the much more massive gas component exerts a drag force that slows the dust down and causes it to drift inwards. Larger dust particles get hit with a stronger amount of drag, causing them to drift inwards faster. Like with planets, all of the dust above a certain size should eventually drift into the star in a simple disk model. 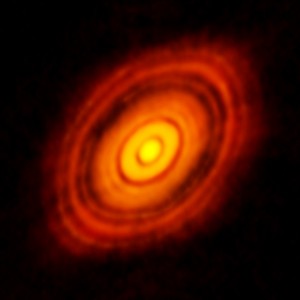 Figure 1. ALMA observations of the dust in HL Tau. Each gap (black) is enclosed by two dust rings (red-orange).

However, disks with migrating planets are not simple. Planets above about Neptune-size are massive enough to clear out some of the gas in their orbit, creating a partial gap in the disk. The gas that is cleared out moves to the edges of the gap, where it acts as a ring-shaped “barrier” that can trap dust and prevent it from continuing to drift inwards. We have observed many of these ring-shaped structures in recent years, including several in the famous image of the disk around HL Tau (see Figure 1).

A dust signature of migration: The Snowplow Effect 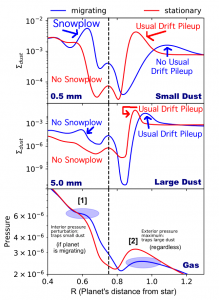 Figure 2. Azimuthally-averaged density profiles of the gas (bottom) and two different dust sizes (top: 0.5 mm, and middle: 5.0 mm). The interior dust barrier is marked with a [1] and the exterior dust barrier is marked with a [2]. In the stationary case (red), the interior barrier is useless since the dust has already drifted away. In the migrating case (blue), the planet is moving fast enough to catch up to and snowplow the slower-moving small dust (top left of top panel). Adapted from Fig. 6 of the paper.

Meru et al. test this idea by running hydrodynamical simulations of the gas and dust in a disk with a planet that is 30 times more massive than the Earth (a little less than twice the mass of Neptune). In some simulations, they fix the location of the planet, while in others, they let the planet migrate inwards.

On the other hand, the authors find that a migrating planet acts more like a “snowplow” (see top left of Figure 2)! In this case, if the planet migrates faster than the dust drifts inwards, it instead collects more and more dust at its interior barrier (like a snowplow collecting snow) as it moves inwards towards its star. Meanwhile at the exterior barrier, the planet moves too quickly for the slower-drifting dust to catch up, leaving little to get trapped exterior to the planet. This is the exact opposite of what happens with a stationary planet, creating a signature for testing whether planets in disks are migrating!