If you had a cookie for each of the 3,877 planets confirmed to date,would you be able to figure out the recipe behind them all? I understand if this holiday season’s sugar rush is already preventing you from thinking about cookies (let alone their recipes) anymore, but figuring out cookie recipes from just a bunch of cookies is pretty much the nature of questions that planet formation studies usually deal with. The main goal of planet formation models is to understand how protoplanetary disks evolve and result in the huge diversity in the demographics of observed planet population (in terms of the planetary mass distributions, orbital architectures, and atmospheric compositions). Theoretical studies in this direction have been attempting to form a coherent picture of how over the course of their lifetimes of just a few million years, the dust particles in the protoplanetary disks grow from roughly centimeter and meter-sized particles (often referred to as pebbles) to kilometer-sized planetesimals that then form the seeds for the formation of terrestrial and giant planet cores.

One of the key obstacles to this approach faced by physical models of small particle agglomeration is the uncertainty in the timescales and hence the efficiency of planetesimal growth starting from pebbles over a disk’s typical lifetime of few million years. This is directly related to how the pressure of the gas in the disk varies with respect to radial distance from the star since the local pressure and gravity at any place in the disk affect how efficiently fast-drifting pebbles can slow down due to the viscous drag of surrounding gas and start to grow into larger planetesimals. Observations that can trace the small-scale variations in the concentration of solids and associated gas pressures with respect to the distance from the star, can thus help in tuning the physical models that describe the growth of planetesimals and ultimately solid protoplanet cores in the disks. Think of scrutinizing a bunch of swirl cookie dough samples with the goal of deciphering the master swirl cookie recipe behind all of them! Today’s paper is the first in the series of 10 papers that present high-resolution observations of 20 such planetary-cookie-dough samples taken by the Atacama Large Millimeter Array (ALMA).

Dust in a protoplanetary disk which could be the prime source of speeding up the growth of a planetary core consists of particles that have sizes typically on the order of millimeter to centimeter. The continuum emission from particles of this size peaks around ~200 GHz which fortunately happens to fall in the range of frequencies which ALMA is sensitive to. Recent observations of continuum emissions from disks around young (few million-year-old) stars like HL Tauri and TW Hydra by ALMA at a resolution of a few AU revealed spectacular substructures in the radial dust distribution of these disks in form of clearly resolved rings and gaps. These features indirectly hint at an early and efficient coalescence of particles due to local particle traps resulting from local pressure bumps in the gas, consequently leading to their growth into protoplanet cores which could very likely be clearing out these gaps in the disks. In addition to pressure variations in the disk, such particle traps could also be caused by an interplay of gas and dust dynamics and magnetic fields.

A more recent observation of the disk PDS 70 by direct imaging using SPHERE has in fact given the first direct evidence of a planet caught live clearing out these gaps! But how common are these substructures in young protoplanetary disks? To investigate this, authors of today’s paper designed The Disk Substructures at High Angular Resolution Project (DSHARP) – the first large-scale survey of its kind – to specifically probe the continuum emission from the substructures of a sample of 20 nearby (closer than 200 parsecs) young protoplanetary disks. 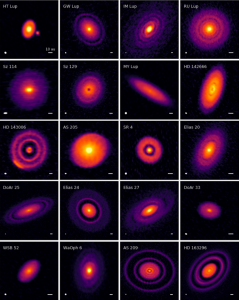 Figure 1: 240 GHz (1.25 mm) continuum emission images of the protoplanetary disks obtained by DSHARP from ALMA. For each disk, the horizontal bars correspond to the scale of 10 AU, and the colors represent relative intensities from different regions of the disks. Figure 3 in the paper.

Using a carefully designed combination of sensitivity and resolution best suited for resolving the disk substructures (if present), and leveraging the interferometry magic of ALMA to achieve an extremely high angular resolution of tens of milliarcseconds (a few AUs), the authors obtained exquisite continuum dust emission images of 20 young protoplanetary disks in the 240 GHz band of ALMA, as shown in Figure 1. Just a first glance at the set of these extraordinarily detailed images suggests that substructures in the form of concentric annular rings, gaps, and even spirals are pretty ubiquitous in disks, even up to distances of about 150 AU from the star. In some cases like disk IM Lup (third from left in the top panel of Figure 1), the spiral patterns seem to appear as a superposition on rings and gaps, and most of them appear to retain azimuthal symmetry.

The DSHARP team has analyzed the sample in further detail and their findings are published in the rest of the papers in the series. Their analyses suggest that sizes and amplitudes of these substructures observed in their sample can plausibly be interpreted as dust trapped in axisymmetric pressure bumps which, when compared to models of dust in disks, can be used to derive constraints on strength of turbulence in the disk causing these particle traps. The continuum dust emission observations from this survey form a rich dataset (released publicly) which would certainly be valuable for follow up high-resolution imaging of young planet-forming disks. Complementing the results from these images with the spectroscopic studies of the disk chemistry using ALMA and in future JWST would hopefully inch us closer to the recipe of planet formation.