Disclosure: Some of the authors belong to a collaboration of which I am a part, but I was not involved in this work in any way.

Humanity is overwhelmed with data. It is estimated that 2.5 quintillion bytes (or 2.5 million terabytes) of data are now created every day. Astronomers have kept up with this pace, designing new observatories and facilities that will produce incredible quantities of data. A prime example of this is the Large Synoptic Survey Telescope (LSST), expected to see first light in 2020. This observatory alone is projected to produce over 15 terabytes of data every night!

There simply aren’t enough people to process and analyze data production at this level, so scientists and engineers must come up with increasingly creative ways to handle this deluge of information. This is where machine learning comes in. By designing algorithms that allow computers to “learn” how to analyze it themselves, this intangible mountain of data can become an informative molehill used to inform government policies, business decisions, or scientific studies. One of the most promising algorithms for this work is a neural network. See this bite for an explanation of neural networks and an example of using machine learning to study the interstellar medium.

Today’s paper uses a neural network to classify astronomical transients, phenomena that are only visible for a short time. Some examples of transients include supernovae or tidal disruption events (TDEs), where a star is stripped apart as it falls into a black hole. The authors of this work develop a tool called RAPID (Real-time Automated Photometric IDentification), which tries to classify transients while they are being observed! For surveys like LSST, which will image the entire visible sky from Chile every few nights, real-time classification would provide a major advantage to astronomers: the ability to obtain as much information as possible about a transient while it is still occurring.

That’s cool! How did they make the neural network?

A neural network does not automatically know how to distinguish between two types of transients; it must be trained on an existing dataset in order to figure out which features are most important for classification. However, there isn’t currently a large dataset for all of these types of transients. For example, one type of transient is the kilonova, a merger of two neutron stars that was first observed last year. This was the only visible detection so far, meaning that the sample size for that transient class is 1. You can’t train a neural network on one object, so the authors instead turned to simulations.

The simulations used in this work were created using software developed for PLAsTiCC, the Photometric LSST Astronomical Time-series Classification Challenge. Originally, PLAsTiCC had simulated light curves for transients observed with LSST. This dataset is now public if you would like to download the data and explore it yourself! The authors repurposed this software to simulate light curves that are representative of the ongoing survey at the Zwicky Transient Facility (ZTF).  These consisted of over 48,000 simulated light curves spread across 12 different classes of transients: 8 unique supernova types and 4 other exotic transients, including the kilonova. The authors used the full dataset, training RAPID on 60% of it and testing it on the other 40%. Figure 1 shows an example light curve, classified correctly by RAPID as a Type Ia supernova, and a movie of this plot can be found here. 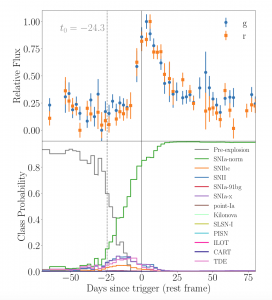 Figure 1: The bottom plot shows the probability that the light curve (top plot) belongs to a certain class of transient as a function of time. ‘Trigger’ indicates when a notice would be sent out that a potentially interesting event is taking place, and it is identified by a rise in brightness above a certain threshold. The vertical grey dashed line shows where RAPID believes the explosion began, and the value of t0 tells you how long this was before the trigger alert was created. Pre-explosion indicates that RAPID believes the transient has not exploded yet, so this class has a very high probability at the beginning of the light curve. Once the light curve jumps in brightness, the probability of a normal Type Ia supernova rises quickly with additional observations. Finally, RAPID is nearly certain this is the correct classification around 20 days after the explosion. Credit: Figure 5 in the paper.

How did RAPID do overall?

It did pretty well! Only 2 days after the trigger alert (a notice sent out by a survey whenever the brightness of a region exceeds a certain threshold above background noise) of the transient event, RAPID was able to classify 4 transient types with greater than or equal to 75% accuracy. If we wait until 40 days after the trigger, RAPID can classify 8 out of the 12 transient types with greater than or equal to 75% accuracy, as shown in Figure 2. With this level of accuracy, the authors found that RAPID may not have the final word on the classification of a particular transient, but it still can reliably inform astronomers in real-time whether or not a transient may be of a class that interests them. This can allow for astronomers to schedule additional observations while the transient is still happening. Most types of transients last around 50 days or less and reach peak brightness very quickly, so classifications expedited by even a few days can mean the difference between being able to capture the physics you care about or not. 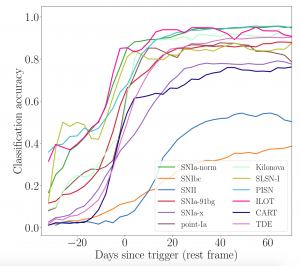 How does RAPID compare?

To test how RAPID compares to other machine learning algorithms, the authors created a Random Forest classifier that mimics the algorithms in traditional transient classification tools using machine learning. This model was then tested on all simulated data prior to 2 days after an alert trigger in order to compare with RAPID’s performance during that time frame. The Random Forest classifier was only able to classify 2 types of transients with greater than or equal to 75% accuracy before 2 days (compared with RAPID’s 4 types), and the overall classification accuracies were lower than RAPID’s. In other words, the authors state that RAPID delivers greater accuracy than traditional machine learning methods at early times while also enabling real-time classification, processing thousands of light curves in a few seconds.

As the exponential increase in data over the coming decades will not be matched by an exponential increase in astronomers, they will need a helping hand from computers. Real-time classification of objects will soon become the standard for dealing with all of this data. RAPID demonstrates that reasonable accuracy can already be obtained for real-time classification, and these models will only improve as computers begin to learn about the countless objects out there to discover.

How to Read (LSS)Tea Leaves to Better Understand Dark Energy