The Sun vs. Your Uncle: Chromosphere Edition

Title: Chromospheric Cannonballs on the Sun

We’ve all been there. You’re enjoying a nice float in the pool on a hot summer’s day when suddenly you hear those dreaded words… “CANNONBALL!” The next thing you know, your uncle soars overhead and you brace yourself for the ensuing tsunami. But you might not have known that as your uncle was cannonballing, an analogous process may also have been happening on the surface of the sun. Today’s paper reports the discovery of a phenomenon in the Sun’s atmosphere that the authors name “cannonballs” due to their circular appearance and arc-like trajectory, much like your uncle and his pooltime performance.

Figure 1. The layers of the Sun. Credit: NSF

Our star is an active place, despite being relatively calm in comparison to many other stars. Similarly to Earth, the Sun has an atmosphere with several layers and complex processes occurring within each one of them (Figure 1). Today’s authors specifically consider the chromosphere, the middle layer of the Sun’s three main atmospheric layers.

Situated between the cooler photosphere beneath and the scorchingly hot corona above, the chromosphere is responsible for transferring heat between these two layers. As a consequence, the chromosphere’s temperature increases the closer it gets to the corona. The heat transfer occurs through a number of processes, which result in a myriad of dynamical features with exceedingly pleasing names (see Figure 2):

Today’s paper adds another pleasing name to the list of chromospheric phenomena in the form of cannonballs.

How does one go about finding cannonballs in the Sun’s atmosphere in the first place? Yang et al. studied images of the Sun taken by both the New Vacuum Solar Telescope (NVST)  in China and NASA’s Solar Dynamics Observatory (SDO). Specifically, they looked at sequences of images that used an H-alpha filter, a deep-red filter that measures the light emitted when the electrons in hydrogen atoms fall from the third-lowest to the second-lowest energy level. In one sequence spanning about ten minutes, the authors noticed a round, dark structure moving along a curved trajectory: cannonball! (Figure 3). They further identified similarly moving structures in two other image sequences that appeared bright as opposed to dark.

Figure 3. Image sequence using NVST that shows the movement of a cannonball on the Sun on 28 October 2017. Figure 1c in the paper.

From the images, the authors calculated a variety of properties about the cannonball structures. They found that the three cannonballs traveled at an average speed of 55.9 km/s, which is roughly five times Earth’s escape velocity, or almost two times its orbital speed around the Sun. They also found that the structures encompassed an average volume of 1.53 billion cubic kilometers, roughly the volume of all of Earth’s oceans or 600 trillion swimming pools. Assuming the density of the cannonball is the same as the chromosphere, Yang et al. then calculated an average cannonball mass of almost 170,000 US tons—about 25,000 elephants, or roughly 1.3 million uncles.

So what are these structures? Cannonballs on the sun are a bit more complicated than your uncle jumping into the pool or an actual ball shot from a cannon. To gather more information, Yang et al. used observations from SDO at ultraviolet (UV) and extreme ultraviolet (EUV) wavelengths, together with measurements of the solar magnetic field, that were simultaneous with the H-alpha images from NVST. The extra measurements revealed evolution in the magnetic field, as well as heightened emission in both the UV and EUV measurements near the locations of the cannonballs. This suggested that the solar magnetic field was intimately involved in the creation of these structures.

The authors propose that a solar cannonball forms when magnetic reconnection occurs within the chromosphere (Figure 4). In this process, small scale magnetic field loops emerge and detach from stronger large scale loops. The small loops rise up toward the large loops and reconnect, flinging chromospheric plasma along the large loops. Magnetic reconnection results in the conversion of magnetic energy into kinetic, potential, and thermal energy—this explains why the cannonballs move so quickly, and also provides an efficient heating mechanism for the chromosphere. 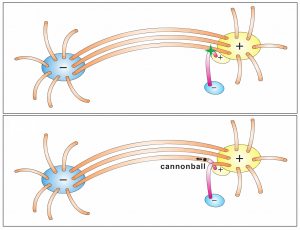 Figure 4. Schematic of cannonball formation. A small scale magnetic loop emerges and recombines with a large scale loop, converting magnetic energy into kinetic, potential, and thermal energy and flinging a cannonball away in the process. Figure 2e in the paper.

As with any new discovery, more questions are raised than are answered in today’s paper. Why are the cannonballs shaped like blobs rather than jets? Why are some cannonballs dark while others are bright? Future observations will answer these questions and almost certainly raise several more. In the meantime, we can enjoy the Sun’s glow from our pool here on Earth, hopefully cannonball-free. ☀️