Status: Submitted to MNRAS; open access on the arXiv

A Growing Universe… and Tension

The rate of expansion of the universe is governed by a parameter called the Hubble constant (H0), measured in units km/s/Mpc (the “clunky-looking” units are explained well in this astrobite). H0 is one of the most important cosmological parameters––it can constrain models of the evolution of our universe––but there are two sets of observationally measured H0 values that significantly disagree with each other. The first type of measurement comes from astronomers who look at the “early” universe by studying the cosmic microwave background (CMB) and baryon acoustic oscillations (BAO), which give snapshots of the universe at only a few hundred thousand years old. A recent measurement of H0 from using this method was made by the Planck satellite, with a value of H0 = 67.27 +/- 0.6 km/s/Mpc. However, astronomers who look at the “late” universe, when the universe is billions of years old, are studying Type-Ia supernovae and Cepheid variables (relying on the cosmic distance ladder), with a recently measured value of H0 = 74.03 +/- 1.42 km/s/Mpc. These objects were formed long after the CMB and BAO made their mark on the universe, which means that these two H0 values are independently measured and thus do not have a shared source of error.

Astronomers looking at the early universe have H0 measurements in excellent agreement with each other, and H0 measurements of the late universe have agreement and have ruled out multiple possible sources of systematic errors as well. The disagreement has reached a 4.4σ tension: the error bars on each type of measurement easily rule the other type of measurement out! As a result, there is a strong need for different, independent measurements of H0, to explore both unknown sources of systematic error and possible new physics. Today’s paper provides one such independent approach.

The authors use a technique called “time-delay cosmography” to obtain distance measurements in a manner completely independent of the previously described techniques. Time-delay cosmography can be thought of as measuring time delays to take a geometric approach to probing the universe. This method works by measuring time delays, which occurs when light from the same source takes different amounts of time to reach our telescopes due to following different trajectories around a lensing source. In other words, measuring the time delays themselves relies on the strong gravitational lensing of time-varying objects, such as quasars. The H0LiCOW collaboration studies strong gravitational lens systems with Hubble Space Telescope (HST) imaging, and uses time delays measured by COSMOGRAIL. One of the challenges associated with studying lensed systems is modeling the gravitational lenses. The authors state that new imaging data from adaptive optics (AO) observations may have better resolution than previously used data from the HST. As such, they use AO data, taken at the Keck Observatory, as part of the SHARP AO effort. Images of the three lensed quasar systems studied in this paper are shown in Figure 1. (It’s worth noting that using time-delay cosmography meant no assumptions about cosmological priors were needed in the lens modeling!) 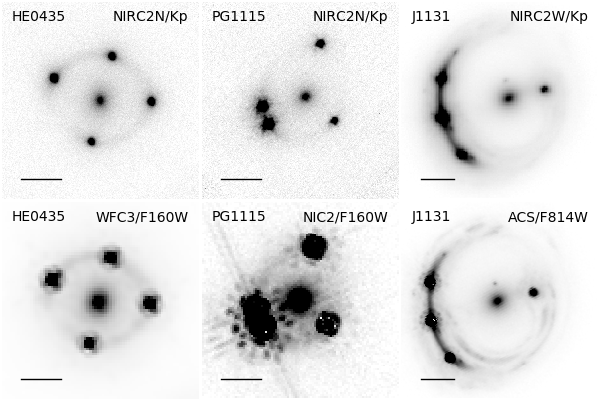 Figure 1. Imaging data from AO (top row) and HST (bottom row) for the three systems studied in this paper. Each horizontal line represents a 1 arcsecond scale. The lensing galaxy is in the center of each panel, while the lensed images and arcs are from the quasar and its host galaxy. (Figure 1 in today’s paper.)

Each system already has measurements of time delays, stellar velocity dispersions, and lens environmental characterizations, which are necessary to constrain degeneracies when fitting lens models. The authors describe statistical tools they use to fit their lens models to the data, noting that they carry out a blind analysis so as to avoid confirmation bias––a blind analysis would prevent the scientists from inadvertently favoring one result over another irrespective of the actual data. They analyze both AO-only and AO+HST data and find that the AO results are consistent with the HST results (which are from studying the late universe). The AO results give H0 = 75.6 +3.2/-3.3, and the AO+HST results give H0 = 76.8 +/- 2.6. Figures 2 and 3 show the AO-only and AO+HST marginalized posterior probability distributions for H0, respectively. (Posterior distributions are explained in this astrobites, and “marginalized” means parameters that aren’t cared about in the analysis are integrated over in the posterior probability distribution function.) 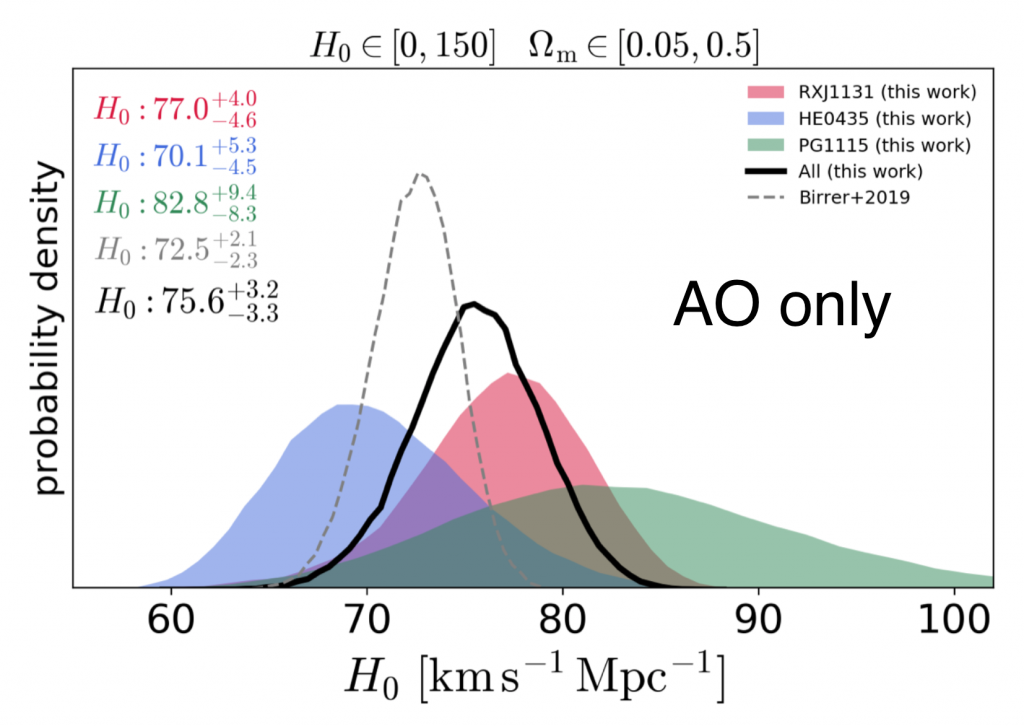 Figure 2. Marginalized posterior probability distributions for H0 from the AO-only analysis of the three systems. Each of the three lensed systems are represented with different colors, and the total analysis taking all of them into account is represented with a solid black line. The dashed gray line shows the most recent H0 value from H0LiCOW. At the peak of each distribution is the highest-likelihood value for H0. The corresponding values and uncertainties of H0 are shown in the upper left. (Figure 20 in today’s paper.) 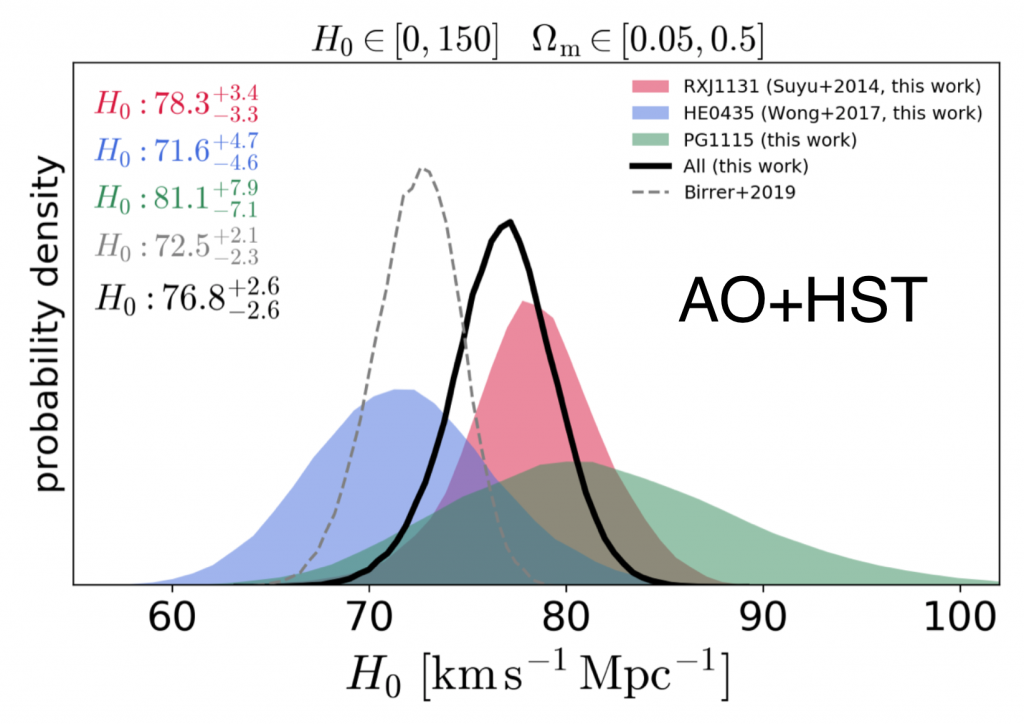 Figure 3. Marginalized posterior probability distributions for H0 from the AO+HST analysis of the three systems.Each of the three lensed systems are represented with different colors, and the total analysis taking all of them into account is represented with a solid black line. The dashed gray line shows the most recent H0 value from H0LiCOW. At the peak of each distribution is the highest-likelihood value for H0. The corresponding values and uncertainties of H0 are shown in the upper left. (Figure 21 in today’s paper.)

In this paper, the authors refrain from doing a comprehensive investigation of cosmological implications, and instead refer readers to a companion paper (that analyzes a total of six strongly lensed systems, and was posted just today!). Nonetheless, this type of study is exactly what is needed––an independent measurement of H0 that will (hopefully) shed light on the various disagreeing H0 values currently inferred from different datasets. The tension between early and late-universe H0 measurements seems to be growing more significant––what a fascinating time for the era of precision cosmology!