Title: Orbital and atmospheric characterization of the planet within the gap of the PDS 70 transition disk

How are planets born? 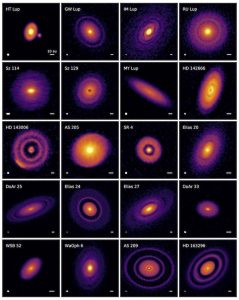 Images from ALMA showing the diversity of discovered protoplanetary disks, including many with gaps (likely carved out by forming planets) and other complex structures. Image credit: Andrea Isella/DSHARP/ALMA

Planet formation begins with a cloud of gas and dust collapsing into a disk. At the center of this collapse is a protostar, not yet hot enough in its center to fuse hydrogen into helium, but on its way to becoming a fully formed main sequence star, like our Sun. The remainder of the material in the disk, swirling around the central protostar, is what will eventually coagulate into planets. Dust grains stick together into pebbles, and then accrete more material onto them until they grow into planetesimals. We’ve seen how complex these disks can be, as planets carve gaps out of the material around them, leading to stunning images such as those from ALMA (shown in Figure 1). Eventually, the planets clear the remaining material out of the disk, corralling it into asteroid belts or ejecting it out to the outer solar system (or out of the system entirely). This leaves a neat arrangement of orbits around the central star, like what we see in our own solar system today.

Although we know these broad strokes of planet formation, a lot of questions still remain about the details. We don’t totally understand how long each step of the process takes, when the process starts, where planets form (compared to where we observe them later in life), or the physical properties a forming planet. The key to answering some of these lingering questions is observing a baby planet in its early formation stages—and that’s exactly what’s done in today’s paper. The authors, part of the European Southern Observatory consortium, present observations of PDS 70b, the first detected young, forming planet around a protostar at this stage of development.

How can we observe a forming planet?

It makes sense that to understand how planets form, we’d want to look at planetary systems that are currently forming. So, why did it take us until now to do so?

Planets are extremely faint compared to the bright stars they orbit—an Earth-like planet is around a billion times fainter than the Sun. The closer in and the smaller the planet, the more likely it is to get blocked from our view by that bright starlight. To complicate things, newly forming planets are also still surrounded by the protoplanetary disk, which itself is also radiating heat in the infrared, the wavelengths where we usually look to image planets. 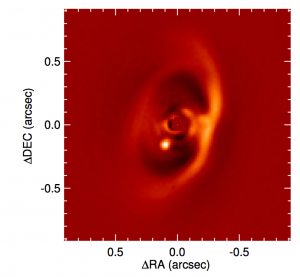 Image of PDS 70b and its surrounding disk from SPHERE/IRIDIS. The central star (PDS 70) is obscured by the coronagraph, and so is not shown in this image. (Figure 1 in the paper.)

In order to take a planet’s baby photos, we need to deal with all that excess starlight blocking our view. There are a few techniques that we have at our disposal. First, we need to block out as much of the light from the star as we can; this is what a coronagraph is, a small dot that blocks out the star, as if you’re just shielding your eyes from a bright light with your hand. There are also systems that help to get the clearest, crispest image possible despite the turbulence in our atmosphere (adaptive optics) and ways of removing noise from the images after you’ve taken them (post-processing). The Very Large Telescope’s SPHERE instrument used such technology to discover PDS 70b, taking images and spectra of the newborn planet and its environment.

How did we stumble across such a gem for studying planet formation? This discovery was actually part of a systematic effort to search for young planets, known as VLT SHINE (SpHere INfrared survey for Exoplanets). They are targeting nearby, young stars since they would be more likely for us to observe these kinds of planets.

What do we know about PDS 70b now?

The authors used physical models to match their observations of PDS 70b, in order to better understand its properties. To determine its orbit around the central star, they used astrometric information (e.g. its changing position in the sky). PDS 70b orbits its star at a distance similar to that of Uranus (~22 AU), taking a whopping 118 Earth-years to make one revolution around PDS 70, its host star.

To get an idea of its mass and composition, the authors analyzed the spectra and matched them to various atmospheric models. PDS 70b appears to be a planet the size of a few Jupiters, with a cloudy atmosphere. Its temperature is around 1000-1600K (compare to Earth’s ~300K); although this may seem strange that a gas giant is so hot, it makes sense since PDS 70b should still be warm from the violent collisions and accretions that created it.

Most interestingly, the disk around PDS 70 shows gaps, arcs, spirals, and other features in the disk—the big question now is, are these features connected to the presence of this planet? Although we don’t have answers yet, this is an exciting first step, and there is even more to look forward to as ALMA and future missions like JWST observe more of these newborn planets.