Title: Uncovering the Birth of the Milky Way Through Accurate Stellar Ages with Gaia

The Importance of Age

The age of something seems like such a simple, easy to obtain, and fundamental property in science. But it is a critical measurement for helping us better understand the history and evolution of most everything in the Universe. For instance, you might want to know how old a tree is so you can trace back its history and understand why it grew a certain way. We know that our Solar System is about 4.5 billion years (Gyrs) old. From this knowledge we can look back in history and explain how the Sun and its planets must have evolved into what we see today. We believe the Universe is around 13.7 billion years old, and based on the ages of other galaxies, we conclude that galaxies must have formed shortly after the Big Bang (in cosmological terms). But determining the age of something in astronomy is extremely difficult. Stars in our own galaxy, the Milky Way, pose an interesting challenge. It might surprise you that we know the age of the Universe more precisely than we do most stars nearby. Why this discrepancy? You would think that stars closer to us should be easier to date than the entire Universe! However to know the age of a star, we need to know how bright or luminous it actually is. With this information, stellar evolution models can trace back the star’s origin and age. Sounds easy enough, but in order to know how bright a star truly is we need to know how far away the star is. After all, a flashlight can outshine a spotlight if we move close enough to it. The same principle applies to stars. However, accurate distance measurements to these stars have for decades been difficult to obtain. Then Gaia came along and provided precise distance measurements to millions of stars in the Milky Way. Equipped with this new powerful information, the authors of today’s paper determine the ages of many of these stars and begin to piece together the most detailed history of our Milky Way. 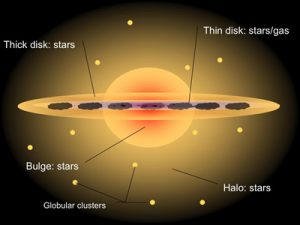 Figure 1: A cartoon of the structure of the Milky Way galaxy. The authors of today’s paper focus on the stars in the Halo and Thick Disk. (Credit: Cosmos at Swinburne)

In order to understand the Milky Way’s history in its entirety, the authors start by isolating different portions of our spiral galaxy (see Figure 1). In particular, they studied a group of stars in the halo or outer portion of our galaxy. These stars have orbital speeds greater than 200 km/s and orbit the main structure of the galaxy in random trajectories. After determining the luminosity of each star they plotted their colors on a color-magnitude diagram (a plot showing how bright a star is at different wavelengths). The authors found that some of these halo stars appear “redder” (brighter at longer wavelengths) when compared to other stars which were “bluer” (brighter at shorter wavelengths). Using stellar evolution models, they determined the ages of both populations of stars, which are shown with the red and blue lines of the histogram in Figure 2. Surprisingly, both sets of stars had the same peak age of 13.6 Gyr and the same spread in ages. In other words, both populations started and stopped forming at almost the exact same time, and the difference in color has nothing to do with age! Instead, the authors attribute the color discrepancy to the metallicity of each set. The redder stars must have formed in a galaxy that was more enriched in metals while the bluer stars formed in a metal-poor galaxy. It has been proposed that the Milky Way might have collided and combined with a smaller dwarf galaxy known as Gaia-Enceladus at some point in its history. Since dwarf galaxies tend to possess less metals than their larger counterparts, the authors conclude that the bluer metal-poor stars must have initially formed in the Gaia-Enceladus galaxy. Moreover, taking the ratio of the amount of metals in the redder stars to those in the bluer stars, Gaia-Enceladus must have been 4x less massive than the larger progenitor to our Milky Way.

Figure 2: The histograms on the left shows the normalized distribution of stellar ages for those stars in the red halo population, blue halo population, and the thick disk. Both the red and blue halo stars have a similar age distribution showing that these stars formed and stopped forming at roughly the same time. The thick disk shows a spike in star formation around 9.5 Gyr which corresponds to right after the Gaia-Enceladus collision. The histograms on the right compare the metallicity or ratio of iron to hydrogen (Fe/H), of the different stellar populations. Both the thick disk and redder population have similar metallicities demonstrating they formed in a similar galaxy whereas the blue population must have formed in a different galaxy that was metal-poor. (Figure 2 in today’s paper)

The distribution of the ages of halo stars also pin-points when the merger occurred. As there are no halo stars younger than about 10 billion years, the collision must have transpired around then. The halo stars from both galaxies were those ejected from the main portion of what would become the Milky Way, which is why their trajectories appear random and erratic.

The timing of this merger is also supported by studying the ages of stars in the thick disk of the Milky Way. The ages of the thick disk stars, illustrated by a black line in Figure 2, have a similar age distribution as the halo stars between 10 Gyrs to 13.6 Gyrs. But around 9.5 Gyrs there is suddenly an uptick in star formation in the disk. From observing other galaxy collisions, mergers tend to be followed by a burst in stellar formation as the gas from both galaxies mix together. Thus the disk of the Milky Way experienced more star formation even when already formed stars were kicked out to the halo.

The authors also note that there appears to be a stabilization of star formation between 6-8 billion years ago. During this time, gas that was originally in the thick portion of the disk began to settle out into the thin disk which surrounds the equator of the Milky Way. This settling sparked a constant amount of star formation in the thin disk, which slowly began to fizzle out as the gas was consumed.

This story of our Milky Way told by today’s authors might appear straightforward and simple. However, while many aspects of this tale have been proposed by other groups, this current explanation provides one of the most precise and clearest picture of the Milky Way’s history. This play-by-play account would not have been possible without knowledge of something as simple as stellar distances. Gaia’s mission may be simple: to determine the distance of stars, but equipped with this knowledge, answers to some of the most fundamental questions regarding the history of the universe are within our reach for the first time.