What do galaxy clusters and Russian dolls have in common?

Astronomers have observed that clusters of galaxies have a peculiar property: they all look roughly the same regardless of their mass or distance. Unlike individual galaxies, which are distinguishable by their distinct shapes or “morphologies,” galaxy clusters are intriguingly similar looking.

Weak self-similarity is a bit subtler. When we look at distant clusters, we are looking back in time at a younger universe which had a higher overall density. However, if we consider the changing density in the universe, a distant cluster is identical to a nearby cluster of the same mass. See an example below in Figure 1.

Figure 1: Two X-ray observations of galaxy clusters, highlighting the hot gas between galaxies. Although the clusters both look identical, the cluster on the left is substantially farther away than the one on the right.

Galaxy clusters are therefore a bit like the Russian dolls of the cosmos. Each successive doll is equivalent to either a smaller cluster or a more distant one. This is a remarkable property of galaxy clusters considering their size (upwards of 10¹³ solar masses).

Why do we care?

Spherical clouds of dark matter known as halos envelope the galaxies inside clusters. These clouds ensure the stars and hot gas inside a cluster stay gravitationally bound, rather than simply going with the (Hubble) flow. Self-similarity is interesting to astronomers and cosmologists because it is a prediction for a type of dark matter that is cold, and therefore suggests an underlying cosmology.

Deviations from self-similarity challenge our understanding of how clusters form. For example, what if clusters formed differently at higher redshifts compared to now? This could change the way we think about their evolution, and how we use them to measure the overall matter content in the universe.

In a recent paper, a team of authors showed that 25 massive galaxy clusters generated from a “dark-matter only” simulation are astonishingly self-similar at redshifts (z) greater than 1. While this is an interesting result, the authors of today’s paper take self-similarity to task with a different approach to measuring the evolution of cluster halos.

Between redshift 1 and 0, we expect clusters to evolve significantly. “Dark matter only” simulations tell us about the growth of halos but tell us nothing about the stars, gas and galaxies inside. Various interactions, such as feedback from stars and active galactic nuclei (AGN), contribute to the evolution of the cluster and could result in them looking not so self-similar. These are known as “baryonic processes.”

The authors address the issues with dark matter-only simulations by incorporating both dark matter and baryonic matter into their simulations. They use a sample of 324 simulated galaxy clusters. Moreover, they explore cluster evolution out to a higher redshift than previous studies (z = 2.5 instead of 1).

The average total mass density profile (containing both dark matter and baryons) is calculated for four redshift intervals – 0.0, 0.5, 1.0, 2.5 and is shown in Figure 2. 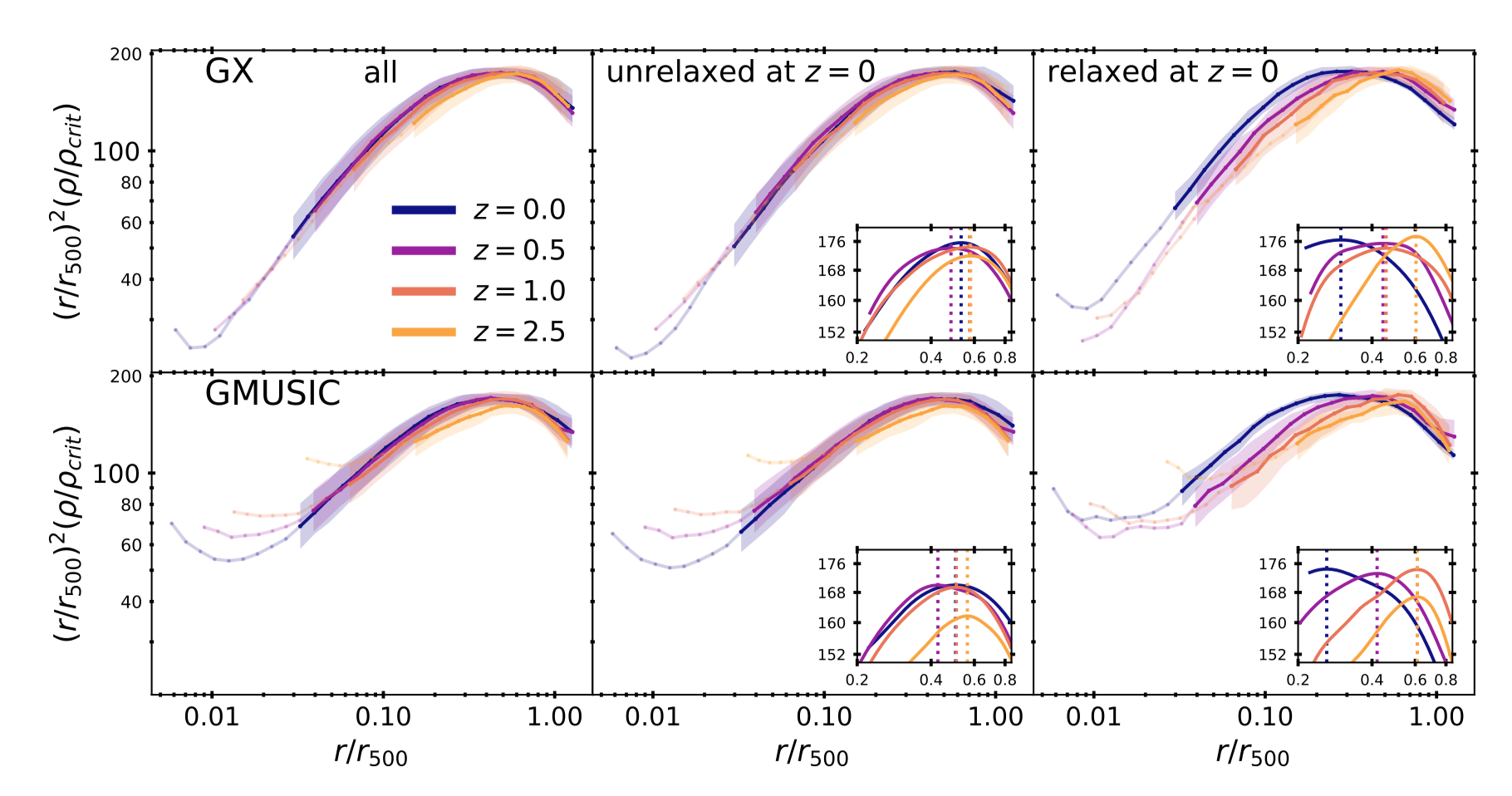 Focusing on the left panel of Figure 2 only, we can see that, over these four redshift intervals, the average density profile for the sample of 324 halos peaks at the same location, meaning that the overall mass density of clusters is constant from z=2.5 right up to now.

The middle and right panels show us density profiles for two subsets of the sample – named “relaxed and “unrelaxed.”

Looking at Figure 2 again, we can see the same trend for a subset of unrelaxed clusters (middle panel). Interestingly, the sample of relaxed clusters shows a noticeable evolution in the density profile over the course of cosmic time (different colors are no longer on top of each other). This is a considerable deviation from self-similar predictions that is worth examining.

The authors believe that the key to understanding evolution for relaxed clusters lies in the formation time.

Various papers have argued that halos grow in two phases. The first is an early-fast accretion phase where mass congregates in the central part of the cluster followed by a second phase of slower accretion of mass at the outskirts. The density in the centre stays constant. In short, a relaxed cluster today is likely to have formed at an earlier time—it has moved from the early-fast accretion phase to the slower one.

The reason we do not see this distinction in the overall sample is because relaxed clusters make up a small fraction of all clusters. In the sample used in this paper, 16% are relaxed and 84% unrelaxed. The dominant representation of unrelaxed clusters washes out such an evolutionary trend in redshift.

So let’s go back to our Russian dolls. The unrelaxed clusters uphold the analogy rather well. But in a sample of relaxed clusters, we can imagine the smaller dolls to be somewhat distorted and no longer identical in form to the larger ones.

It is possible that galaxy clusters are not the Russian dolls our theoretical predictions expect them to be, and this is important to know for any cosmological studies we hope to do with them.

I'm a 4th year PhD student at the University of Sussex, interested in X-ray and optical observations of galaxy clusters to learn more about dark matter and large-scale structure. When I'm not working, I'm usually trying to write in coffee shops or hiking.