A Bare Hot Rock with No Atmosphere

Title: Absence of a thick atmosphere on the terrestrial exoplanet LHS 3844b

Exoplanets come in a wide range of flavours and sizes, ranging from puffy gas giants to small rocky worlds. Characterizing the atmospheres of this diverse population gives us an insight into their formation processes and potential habitability. On this front the most attractive candidates are terrestrial exoplanets around M dwarfs, which form a significant fraction of the known terrestrial exoplanets. The smaller size of M dwarfs as compared to Sun-like stars means that the signal due to a transiting exoplanet is relatively larger making it easier to detect and characterize even the small rocky planets orbiting them. But what makes rocky worlds around M dwarfs so intriguing? Since M dwarfs have a fraction of the Sun’s luminosity, their habitable zones are much closer in—about a tenth of the Earth-Sun distance.
However, M dwarfs are also infamous for frequently spewing high energy flares which over time can strip the atmospheres of close-in rocky exoplanets around them. Observing more such systems with a range of configurations and physical properties can help us in understanding the survival of atmospheres on exoplanets orbiting M dwarfs. The authors of today’s paper present an investigation of one such exoplanet recently detected by TESS. Meet LHS3844—a nearby (~ 14 parsecs) M dwarf hosting a rocky exoplanet 1.3 times the size of Earth and with an orbital period of just 11 hours.
Where’s the hot spot?
Monitoring the brightness of a star and planet system reveals different information about the planet at different points in the orbit. While measuring the planetary transit depth and its variation with wavelength (also known as transmission spectroscopy) can show us how the atmosphere looks vertically, the phase curve and secondary eclipse measurement (when the planet passes behind the star) holds the information about the horizontal processes in the atmosphere like atmospheric circulation. How do we extract this information? The variation in brightness of the system as measured by phase curves as different longitudes or phases of the planet come in and out of view can be used to reconstruct the surface brightness distribution of the planet, more easily so if the planet is tidally locked. Surface brightness inferred from infrared phase curves (also known as thermal phase curves) in particular, can tell us how the thermal energy from dayside is redistributed around the planet by winds in the atmospheres. The signature for the presence of such atmospheric circulation can be seen in form of an eastward shifted hotspot on the surface brightness distribution of the planet. The authors of today’s paper use this shift as a diagnostic to determine the presence of an atmosphere on LHS3844. They use the Spitzer Space Telescope to obtain a phase curve of the planet in the 4.5 micron wavelength band and use that to reconstruct the surface brightness distribution of the planet. As seen in Figure 1, they observe a symmetric phase curve and surface brightness distribution with the hotspot on the point directly facing the host star, indicating the absence of atmospheric circulation on the planet. They conclude that the planet is consistent with the picture of a tidally locked rocky world with an absorptive surface and absence of a thick atmosphere (surface pressures higher than 10 bar). The scorching surface temperature of 1040 K as obtained from the secondary eclipse depth (which measures the ratio of planet to star brightness) makes this scenario even more plausible.

Figure 1: Spitzer 4.5 mircon phase curve of LHS3844b. The left diagram shows the change in the brightness of the star-planet system as the planet goes around the star and it’s day side comes into view (which increases the total brightness of the system as now the planet’s dayside is also contributing to it), it goes behind the star during the eclipse, and comes back in the view again. The diagram on the right shows the inferred dayside brightness temperature distribution of the planet, with the hotspot at exactly the point facing the star (Figure 1 in the paper). 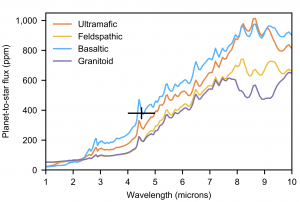 Figure 2: Measured planet to star brightness as compared to the predictions from various rock surface types (Figure 2 in the paper).

The authors further model the emission spectrum of the planet due to different planetary surface types and find that the observed planet brightness at 4.5 micron is most consistent with a surface covered with dark basaltic rocks (see Figure 2). In the solar system, basaltic rocks form as an outcome of solidification of lava flows from volcanoes, as seen on Earth and Mercury. They also consider the possibility of a thin atmosphere surviving on the planet and conclude from their model that given the age of the system the stellar winds would have eroded a thin atmosphere of 1-10 bars unless there is a mechanism like outgassing continually replenishing it.

While we wait for future observations with JWST to reveal more fascinating details about LHS3844b, TESS will continue to find more such interesting systems in the coming year. There might be a cooler planet with just the right conditions to host a habitable atmosphere right around the corner!