Observing exoplanets is challenging! So how can we ever imagine learning something about their seasons? Over the past decade, astronomers have made extensive progress in understanding the atmospheres of hot Jupiters including weather detections. But hot Jupiters are tidally locked and therefore experience no seasons. For observations of seasons, we need to push outwards to planets on longer orbits, where tidal interaction with the star is minimal. But a longer orbit means cooler planets. Cooler planets emit less thermal radiation making them far dimmer than hot Jupiters, with blackbody spectra that peak at longer infrared wavelengths. This population of “warm Jupiters,” or Jupiter-sized planets with temperatures between 500-1000K, are out of reach for current telescopes. But with the James Webb Space Telescope’s 6.5m mirror and its ability to observe out to longer wavelengths than current telescopes, astronomers will soon be studying the atmospheres of this new population of exoplanets!

But how do we know hot Jupiters are tidally locked? Gravitational interactions between a star and a planet on a close orbit, will slow the rotation of the planet to the point that its rotation is the same as its orbital period. As a consequence, one side of the planet always faces its star, while the other side is never illuminated. Tidal locking also circularizes the orbit of a planet and removes any rotational tilt (obliquity). We therefore know the rotational period, eccentricity, and obliquity of a hot Jupiter without any required analysis. Warm Jupiters are less affected by significant tidal effects, which means we have no intrinsic knowledge of these parameters. The author addresses the obliquity part of this problem in today’s astrobite by posing the question: can we detect and determine the obliquity of a warm Jupiter and in doing so, finally observe seasons on an exoplanet? 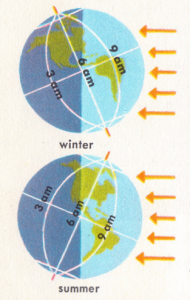 Besides being a word that scores you 23 points in Scrabble, the obliquity, or rotational tilt, of a planet controls the length and strength of that planet’s seasons. Figure 1 illustrates how Earth’s obliquity of 23 degrees creates seasonal changes over the course of an orbit. Summer or winter in one hemisphere depends on whether our rotational axis is pointing towards or away from the Sun, respectively. Now imagine Earth with no tilt. With no tilt, we wouldn’t have seasons. But with larger tilt, our seasons would be more extreme.

The author creates a hypothetical warm Jupiter that has all the same properties of Jupiter including same radius, mass, and rotational period. But instead of orbiting the Sun once every 5 years, this planet orbits a Sun-like star every 10 days giving it a temperature of about 900K. Using a global circulation model (GCM), the author simulates the atmosphere of this warm Jupiter at varying obliquities. What seasons look like on this warm Jupiter is plotted in Figure 2 for obliquities of 30 degrees (top panel), 60 degrees (middle panel), and 90 degrees (bottom panel). The fast rotational period (10 hours) of this planet compared to the orbital period of 10 days causes the atmosphere to smear out most of the day/night temperature contrast, allowing the author to average the temperature over longitude (east-west direction). The larger obliquity correlates with longer and more extreme seasons at higher latitudes (north-south direction). For obliquities greater than 60 degrees, the poles of the warm Jupiter become hotter than the equator leading to larger temperature contrasts than the 30 degree (Earth-like obliquity) model. 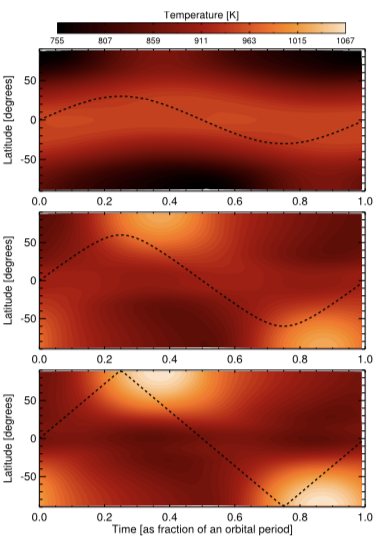 Figure 2: Map of the longitudinally averaged temperature as a function of latitude and time over one orbit. Top panel is a warm Jupiter with 30 degrees obliquity, middle panel is 60 degrees obliquity, and bottom panel has 90 degree obliquity. The black dashed line represents the location of the subsolar point over time. (From Fig. 2 in today’s paper)

The Planet Now Has Seasons, Let’s “Observe” It

The paper first analyzes the phase curves of these hypothetical warm Jupiters. A phase curve is the light curve of a planet as it orbits around its star. At different points in its orbit, the planet will emit more or less light depending on what fraction of the day-side we observe. As the planet has a 10 day orbit, the author notes that this would require continuos observations with JWST for those 10 days.  From these phase curve models, the author noticed a degeneracy between the obliquity of a warm Jupiter and its viewing orientation. Figure 3 shows that a planet with the same obliquity can appear very different depending on what angle we observe it at. By summing up the total flux of this planet at different locations in its orbit, we can create phase curve observations. However, phase curves only provide a 1D total flux map of the planet. Even with the same obliquity, we will observe different amounts of flux simply due to our viewing angle. Phase curves alone don’t provide enough information to measure obliquity and viewing angle independently.

In order to break this degeneracy, we will need more than just a measurement of the planet’s total flux. Eclipse mapping might be the solution as it provides a 2D spatial map of the planet’s dayside. Figure 4 (from Majeau et al. 2012) illustrates the concept behind eclipse mapping. As the planet passes behind its star, slices of the planet are hidden over time corresponding to the shape of the eclipse. By studying the shape of this eclipse, the author concludes that we will have sufficient information to distinguish between the obliquity and viewing angles of the planet. And JWST should have high enough precision to detect these different shapes.

Figure 4: The concept of eclipse mapping. As the planet passes behind its star, slices of the planet map to the slopes of the secondary eclipse. Combining this information with the eclipse depth should help observers distinguish the direction we are viewing the planet we are observing in Figure 3. (From Fig 1 in Majeau et al. 2012)

However, this paper explores obliquities on a warm Jupiter assuming a known eccentricity and rotation rate. The reality is that these parameters will be unknown when observing an actual warm Jupiter. How this will affect the presented observations is currently being explored. This paper does stress that these unknowns will not wipe out our ability to measure obliquity, instead they will just make the data a little more “interesting” to analyze. With JWST, the future does appear to be hot, or uh, bright for warm Jupiters and exo-seasons!