Next year will mark the 25th anniversary of the first detection of a planet orbiting a main sequence star: 51 Peg b. Since this discovery, we have been finding these extrasolar planets (or exoplanets) at an exponential rate, passing the 4,000 milestone earlier this year. Of these thousands of planets, we have found some bigger than Jupiter and rocky planets more massive than Earth. As you might expect, most of the planets we have discovered are unlike any we have in our own Solar System. But all except a handful of these have one important characteristic in common: they are no longer undergoing formation. As most of these systems are older than a billion years, it is a challenge to piece together how these planets initially formed and evolved. We know they must have formed in a disk (known as a protoplanetary disk) that surrounded the forming star. We’ve observed many of these disks, and we have observed very massive planets forming within them. Still, more observations are needed if we want to learn how a planet goes from dust and gas particles to a rocky object potentially surrounded by a volatile-rich (not just hydrogen and helium) atmosphere.

This might seem like an easy task; we are clearly skilled at finding exoplanets. However, the disk makes it nearly impossible to find anything but the most massive planets forming. Methods such as the transit method or radial velocities rely on watching for changes in the star’s light due to the presence of a planet, but the disk can mask these signals. Our current direct imaging capabilities are already limited to only the brightest and hence most massive objects.

Disk Motion is the Key

FIgure 1: Cartoon depicting how the velocity of gas particles at varying distances to the star is expected to change in a disk when a planet (gray dot) is present. The blue dot represents the location where the gas is slowing down the most and the red dot is where the gas is speeding up. (Modified from Figure 1 in today’s paper)

If we want to find Jupiter-mass and smaller planets, we need a new technique. This is where today’s authors come in. Since we have this massive and large disk, why not look for possible forming planets by observing the effect these planets would have on the motion of the gas particles, known as kinematical effects? As a planet orbits, it will push the gas around creating a lack of particles in one area and a build-up of particles in another. This local deviation in the gas structure in turn creates a difference in pressure, or pressure gradient. Without any pressure gradient, gas particles should orbit the star with a Keplerian, or orbital, velocity where the velocity decreases as you move further away from the star. However with this gradient, particles deviate from Keplerian orbits by speeding up or slowing down in order to fill the void created by the planet. A cartoon of this effect is shown in Figure 1 which plots the velocity differences as a function of distance from the star. Notice that gas particles at distances closer to the star than the planet slow down while those further away speed up in order to try to match the planet’s orbital speed. The authors hypothesize that if they can observe this effect in a disk, they will not only be able to confirm the existence of a planet but also determine its mass.

Putting the Method to the Test

While this sounds like a practical method, does it actually work? Today’s authors test their idea by using archival data of the protoplanetary disk HD 163296. Previous analyses have hinted at the presence of forming planets in the disk, making it a promising test candidate. Using emission from a special type of isotope of carbon monoxide,

, to probe the middle of the disk where planets should be present, the authors determined the velocity of this gas at different distances from the star (gray points in Figure 2). They then created a simulation of the disk motion assuming no planets, which they plot in orange. Interestingly, it does a poor job of explaining the motion of the disk. Next they re-ran their simulation with two embedded planets: a Jupiter-mass planet at 100 AU and a 1.3 Jupiter-mass planet at 165 AU (blue line). With this model, they were able to better fit the structure of their data beyond 80 AU. Although the authors note that they cannot dismiss every scenario without a planet, they do manage to rule-out many common ones allowing them to conclude that this disk should host at least two Jupiter-mass planets. 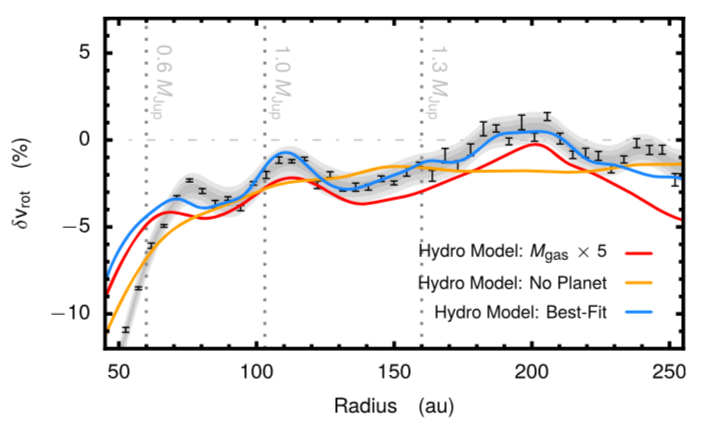 Figure 2: The change in velocity as a function of distance for the disk HD 163296 (gray points). The location of the suspected planets are noted with the gray dashed lines. Notice how the change in the velocity around each gas line is similar to the cartoon in Figure 1. The best fit model with no planets is shown in orange while the model including two Jupiter-mass planets is shown in blue. Distances beyond 80 AU are well fit by the blue model, however, the authors are unable to explain why it varies so much inside 80 AU. (Figure 5 of today’s paper)

The question still remains as to what is going on inside 80 AU. The authors note that adding another planet of 0.6 Jupiter-masses at 65 AU provided a decent but not great fit to the data. They also suggest that magnetic fields creating instabilities in the gas could also cause a disagreement between the model and the data. However, they note the resolution of the image deteriorates as you move closer to the star (fewer pixels available). Perhaps future instruments with better resolution will be able to unravel this mystery. Regardless, today’s authors have demonstrated that their new technique could open doors to finding forming, or newly-formed, planets by helping us look into the dynamics of their protoplanetary disks.