The meeting took place over five days in the beautiful Harpa center. While there were about 100 talks during the conference, each was 15 minutes giving the speaker plenty of time to both introduce and present their work. The organizers chose speakers with “the most exciting new results to present”. This meant that the talks were both interesting and in many cases unpublished! Many talks had a large “no tweeting” icon indicating unpublished work (which made writing this post a little interesting, though many have been published in the last month). One memorable moment involving press embargoes took place when a speaker was presenting a recent discovery of a transiting planet around a star with an iconic debris disk. Though many people in the crowd recognized the disk, he was careful not to say the name of the system. He did let it slip once which was followed by nervous/relieved laughter from everyone.

The following are summaries of a few talks I found interesting, it is absolutely not a summary of the entire conference. I’ve put a bunch of links to more information at the bottom of the post. 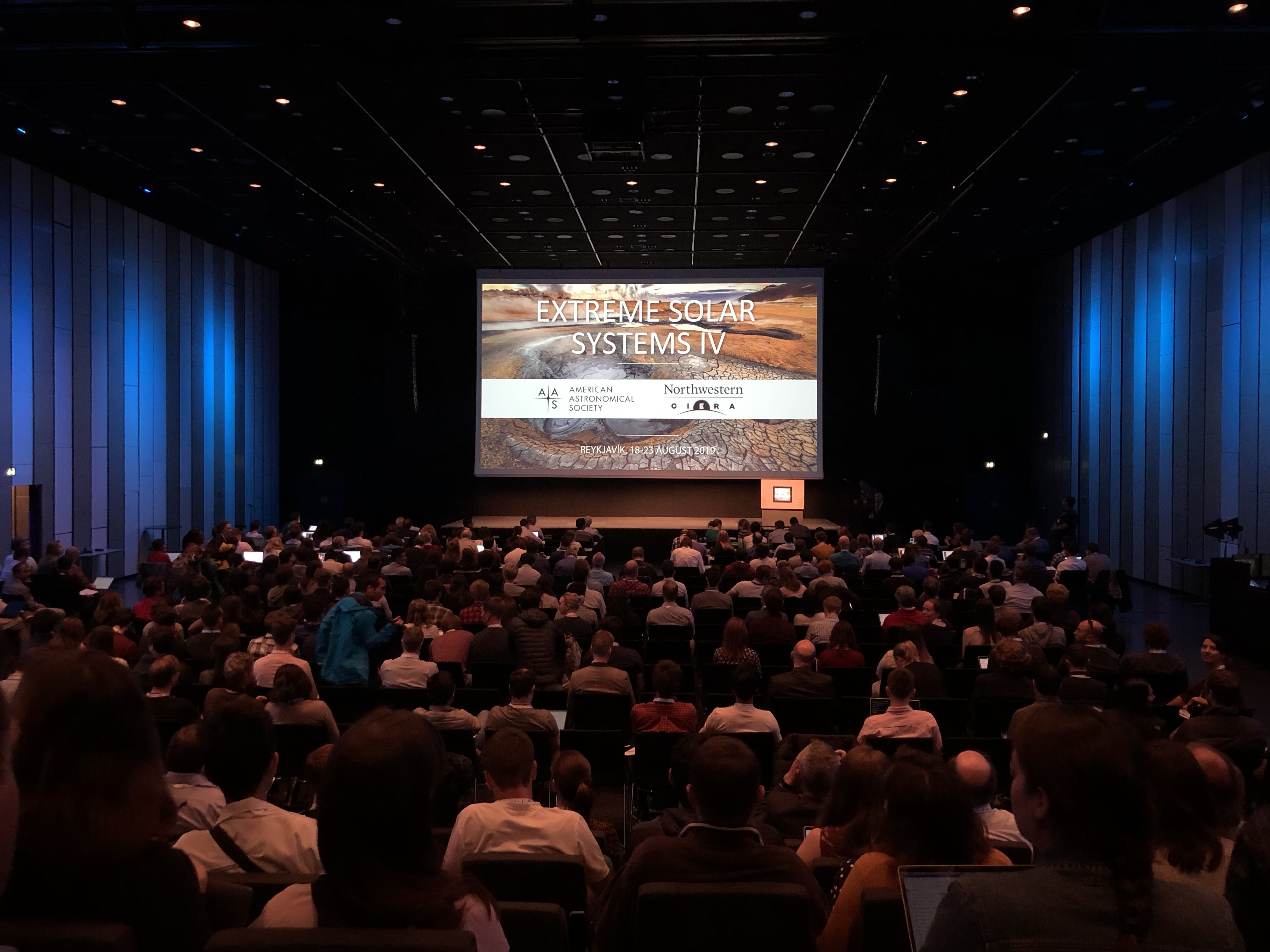 The first session of the conference was titled “New Discoveries” and contained overview talks on current missions and surveys such as TESS and GPIES. There were also a few specific talks on individual studies such as one by Laura Kreidberg who used Spitzer space telescope observations of a terrestrial (rocky) exoplanet to uncover its bare surface. You can read more about that study in this astrobite.

Another interesting talk was by Sarah Blunt who presented her discovery of a >3 Jupiter mass planet with a period of about 70 years using long term radial velocity monitoring. The planet has an eccentricity of ~0.8 making the planet’s orbit range from distances inside the orbit of Jupiter to outside the orbit of Neptune. This planet could be a prime target for direct imaging in ~5 years when it reaches apastron. However, the optimum wavelength to observe this planet will be at 10μm in thermal emission, which makes observations slightly more difficult (due to instrumentation). This planet should be detectable in Gaia astrometry within the next few years.

Marta Bryan gave a very interesting talk on the first constraints on the 3D angular momentum architecture of a planetary system. Previous studies have only focused on the alignment between a host star’s spin axis and a given planet’s orbit. This work added the spin of the planet to fully characterize the system. To measure inclination of the spin axis of the planet and star she used measurements of the rotation period and projected velocity of that rotation (also known as v*sin i). With these two values, and an estimate of the size of the body, you can solve for the inclination. The inclination of the planet’s orbit was measured using high resolution imaging to track the movement of the planet as it orbits its host star. With this information, they can place constraints on the planet’s formation history. Planet’s spin can become misaligned through interactions with other bodys (like Uranus in our solar system) or can even start their lives misaligned if they formed in a turbulent environment.

A New Explanation for Spin-Orbit Misalignment In Planetary Systems?