Title: A Hard Look at NGC 5347: Revealing a Nearby Compton-Thick AGN

Black holes are some of the most interesting and extreme objects in the universe. Fortunately, we think that almost every galaxy in the universe has a supermassive black hole (SMBH) at its center, giving many opportunities to study their environments. As matter falls towards a black hole, it forms an accretion disk — a flattened disk of gas and other debris — outside of its event horizon. This accretion disk is hot and emits radiation, even though we can’t see any light from the black hole itself. When SMBHs at the centers (or nuclei) of galaxies are actively accreting mass and emitting a huge amount of energy, we call them Active Galactic Nuclei (AGN). The different structural components of AGN, shown in Figure 1, emit radiation in a wide range of wavelengths, from low-energy radio to high-energy X-rays and gamma-rays. 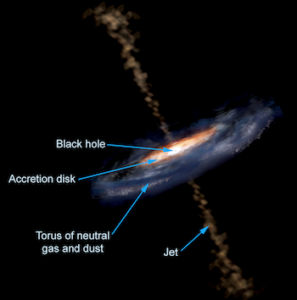 Figure 1: The structural components of an AGN. Matter orbiting the black hole forms an accretion disk. There is also a torus, a donut-shaped cloud of neutral gas and dust, that could obscure the light emitted by the disk. (Image credit: Aurore Simonnet, Sonoma State University)

The X-ray emission in AGN comes from a hot corona surrounding the accretion disk. In the corona, ultraviolet (UV) photons get scattered by really fast electrons, gaining enough energy to become X-ray photons (this is the inverse of Compton scattering). As these X-ray photons leave the corona, they run the risk of being absorbed by the surrounding torus of neutral hydrogen and dust. If there is enough neutral hydrogen (at least 1.5 x 1024 hydrogen atoms per cm2 to be exact), most of the X-rays are absorbed and we call the gas “Compton-thick”.

In order to reproduce the observed cosmic X-ray background, we expect that 10-25% of AGN should be Compton-thick (CT AGN). However, actual observations of AGN so far have estimated the fraction of CT AGN to be less than 10%. Are there actually missing CT AGN, or are some AGN misclassified?

NGC 5347 is an AGN that has been classified as both Compton-thick and Compton-thin by different methods, with an estimated hydrogen content differing by a factor of 10 between measurements. Today’s paper re-opens this question by analyzing new high-sensitivity observations of NGC 5347, as well as incorporating more physical models. This investigation could solidify the classification of NGC 5347, as well as help explain the “missing” fraction of CT AGN.

You Have to Look Harder 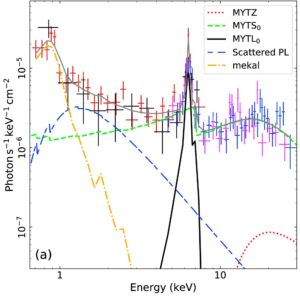 Figure 2:  X-ray spectra for NGC 5347. The y-axis shows the number of observed photons per time, per area, per energy. The x-axis corresponds to the energy of the X-ray photons. Data from Chandra and Suzaku are shown as red and black crosses, respectively. Data from NuSTAR, shown in pink and blue, make up the hard part of the spectrum. The best-fit model is shown in gray, and can be separated into the different components labeled in the legend. These different components represent different emission and absorption processes. (Figure 3a in the paper.)

To determine the properties of the X-ray emission, the authors fit various models to the observed spectrum, shown in Figure 2 above. Fitting a simple power-law to the soft part of the spectrum finds evidence of strong absorption, but more complicated models are necessary to fully understand what’s going on. Their best-fit model, using the software MYTorus (MYTD), indicates that most of the observed X-ray emission is absorbed and reprocessed by the torus. They infer a neutral hydrogen content of 2.23 x 1024 atoms per cm2, leading them to classify NGC 5347 as a CT AGN.

One way for astronomers to classify sources as Compton-thick would be to measure the strength of iron emission lines such as Fe Kα, but current X-ray observatories are not able to resolve this emission line, at least not for NGC 5347. Simulating the spectrum of NGC 5347 as if it were observed by Athena — a future X-ray observatory — suggests that a clear Fe Kα could be resolved (Figure 3), making the classification of NGC 5347 easier. 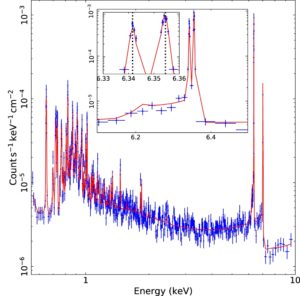 Figure 3: Simulated X-ray spectrum for NGC 5347. Counts in the y-axis represent the number of photons, and the x-axis corresponds to the energy of the X-ray photons. The smaller squares are zoomed in to the ∼ 6 keV region of the spectrum, to show the Fe Kα emission lines. (Excerpt from Figure 4 in the paper.)

The previous classification of NGC 5347 as Compton-thin could mean that other CT AGN have not been correctly classified due to a lack of high quality observations. NuStar and future X-ray missions like XRISM and Athena could provide the higher quality X-ray spectra necessary to identify CT AGN.