The engineering that goes into modern day astrophysical instruments is astounding. From mirrors that can detect a change in distance 10,000 times smaller than the size of a proton to telescopes that can detect individual light particles from millions of light years away, astrophysicists and astronomers constantly prove themselves to be vanguards of tech. Today’s authors discuss a new and exciting piece of technology to do astrophysics: old rocks.

Sorry, did you say rocks?

Cosmic rays, or atomic nuclei that were accelerated to extreme energies, are constantly bombarding our atmosphere. Upon reaching the Earth after their cosmological odysseys, these cosmic rays collide with various atmospheric nuclei, like nitrogen or oxygen. These interactions create showers, which consist of a menagerie of particles including electrons, muons, pions, and neutrinos. While most of these particles decay or smash into other things as the reach the surface of the Earth, neutrinos can travel unscathed deep into the Earth, because they have a very small probability of interacting with other particles. These neutrinos, because they are produced by cosmic-ray interactions in the atmosphere, are dubbed atmospheric neutrinos.

Atmospheric neutrinos can tell us a lot about the cosmic-ray particles that produced them. For example, the amount of neutrinos and their energies is reflective of the number of cosmic rays incident on the Earth, and therefore tells you about the local activity of cosmic rays.

Wait, but what about the rocks?

Some of atmospheric neutrinos are lucky enough to crash into rocks buried deep within the Earth. When this happens, the neutrino often obliterates the nucleus with which it collided, producing a handful of fragmented nuclei that zip off in various directions in a violent process called spallation. However, these child particles don’t travel far, they typically only go a few microns before losing their energy, but in doing so, they leave visible “tracks,” microscopic indications of their journeys.

The authors of today’s paper suggest that one collects a sample of rocks, or paleo-detectors, and subsequently counts the tracks from these nuclear recoils. For their exact calculations, they assume the samples are halite (rock salt) that were buried at least 5 km underground. Specifically, they suggest counting the tracks with specific lengths, as atmospheric neutrinos should only leave tracks with characteristic lengths, see Figure 1. Doing so gives an indication of the total amount of atmospheric neutrino interactions that occurred within the rock over its lifetime, and as such serves as a proxy for the cosmic-ray history in the Milky Way. 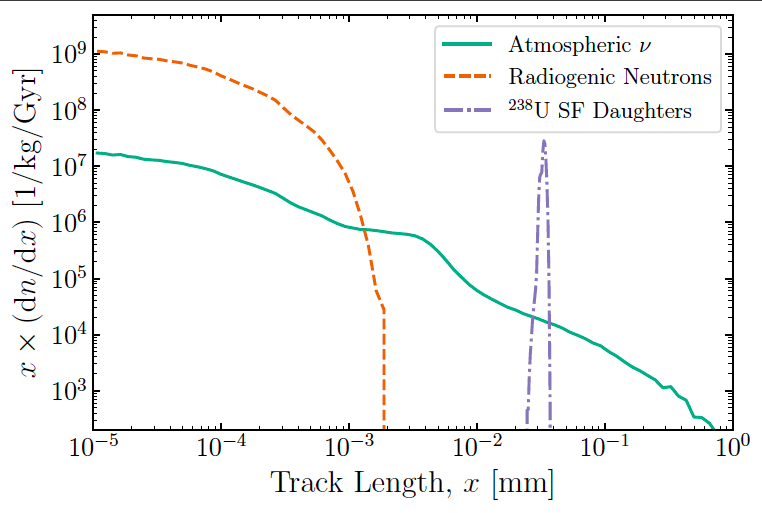 Figure 1: The distribution of track lengths in rock induced by atmospheric neutrino interactions (green), where the y-axis is proportional to the number of tracks per unit track length. In addition to this signal, other tracks can be produced from contaminants in the samples, such as from neutrons produced in radioactive decays (orange) or daughter nuclei from uranium spontaneous fission (blue). Looking for lengths that do not overlap with tracks of alternative origins is a promising way to isolate the signal. Figure 1 from today’s paper.

While the detector itself isn’t actually a piece of newfangled tech, the equipment required to count the tracks is. The authors suggest that the tracks could be counted using a technique called small angle x-ray scattering, which requires the use of an intense beam of x-rays created at a particle accelerator facility. With this beam of x-rays and enough patience, one can take three dimensional images of samples with precision of about a few nanometers.

With a focus on studying cosmic-ray activity over time, the authors of today’s paper focus how collecting paleo-detectors with different ages could allow one to make certain inferences. If the number of tracks in older samples is drastically more than those in newer samples, this might be an indication of an interesting astrophysical event. Some of the scenarios one could differentiate are shown in Figure 2. Although there is no mention of the exact number of halite samples needed to distinguish between the different scenarios, as the number of samples increase, the uncertainties on these measurements should decrease. 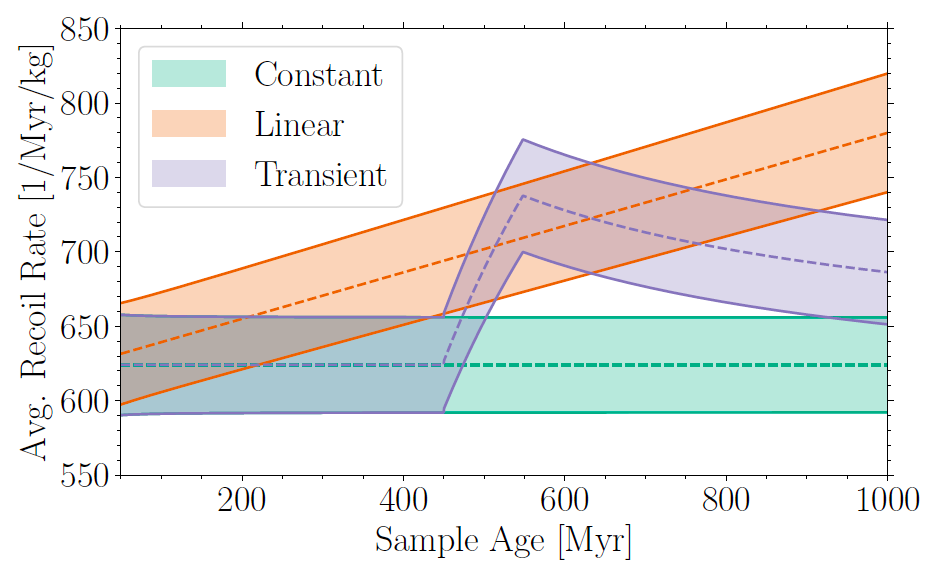 Different numbers of tracks from samples of different ages could differentiate between the three possible scenarios in this figure. For example, the cosmic-ray activity might not have changed over time (green) or it might be steadily increasing (orange). The authors also consider the case of a temporary increase from a transient astrophysical event, which would give the evolution shown in purple. The bands represent some of the uncertainties on the dating of the sample and ability to count tracks. Figure 2 from today’s paper.

It’s worth noting that this isn’t the first time that paleo-detectors have been suggested for use in astrophysics. There is a rich history of trying to use these detectors to detect elusive dark-matter particles or Galactic core-collapse supernovae. Although the technology required isn’t groundbreaking (pun intended), the applications are extremely promising, and the technique is a testament to the creativity that goes into solving modern astrophysical mysteries.