Our Universe is littered with particles of unbelievably high energy, called cosmic rays. The most extreme of these particles carry the same amount of energy as a professional tennis serve, like the Oh-My-God Particle detected nearly 30 years ago. The catch: we don’t know exactly what processes can pack so much energy into a single particle. The authors of today’s article discuss how these particles might gain their energy in a way analogous to your morning trip to Dunkin’™.

Cosmic rays at a glance

Cosmic rays are atomic nuclei that have been accelerated to high energies in astrophysical environments, such as supernova remnants or active galactic nuclei. Although they might seem like a great tool in the multi-messenger astronomy toolbox, astronomy with cosmic rays is no simple task, as they get deflected by extragalactic magnetic fields. 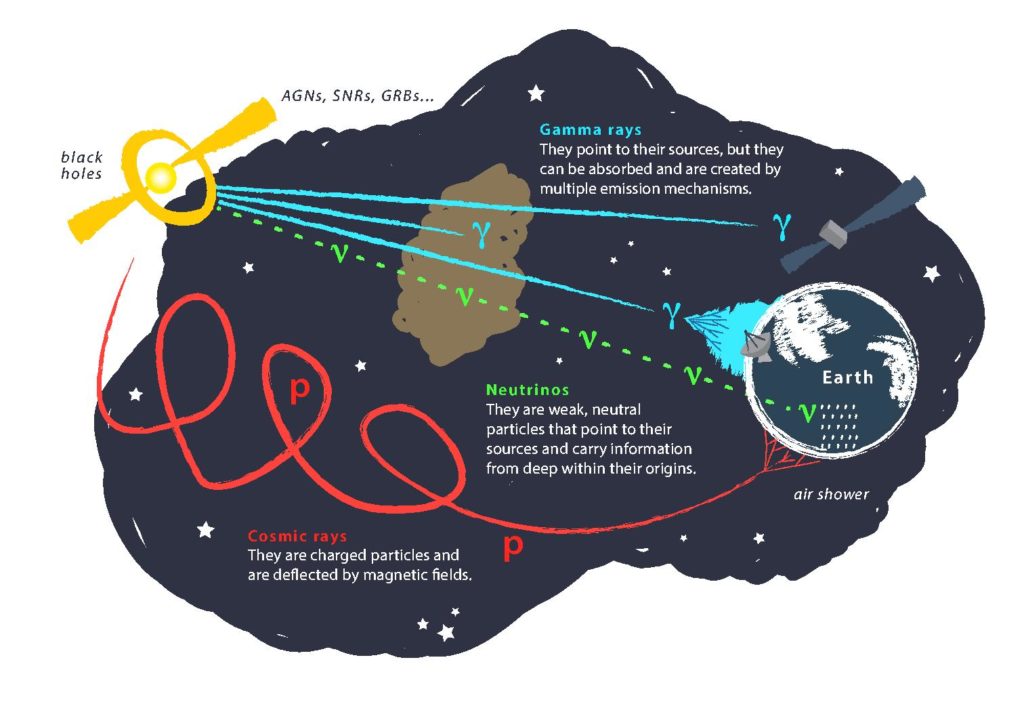 Cosmic rays (red) consist of individual protons and nuclei of heavier elements. They are deflected by magnetic fields along their cosmological odysseys and can’t be used to point back to the place of their origin. Photo Credit: IceCube Neutrino Observatory.

Despite efforts to pinpoint the origins of cosmic rays, especially those of the highest energies, we’ve come up empty-handed (check out these bites for previous studies: Galactic cosmic rays, cosmic-ray anisotropy).

Even though we can’t measure where they come from, we do know their energies, and a variety of cosmic-ray experiments detect millions of these particles every year. Many of them are thousands to millions of times more energetic than the particles in the largest terrestrial particle accelerator, the Large Hadron Collider, but we don’t know how the highest energy cosmic rays get their energy.

Many theories of cosmic-ray acceleration tend to revolve around the idea of Fermi acceleration. In this scenario, objects such as supernova remnants can create shocks, consisting of material moving together with supersonic speeds, and these shocks can accelerate particles to high energies. As a shock wave propagates, particles bounce back and forth across the shock boundary. Over time, successive bounces across the shock front lead to a net transfer of energy to the particles.

While Fermi acceleration does a good job of explaining cosmic rays with moderate energies and has been a staple of models for decades, it has a few pitfalls, and many argue that it can’t provide the whole story for cosmic-ray acceleration at the highest energies.

The authors of today’s paper propose a new way of looking at cosmic-ray acceleration: the espresso mechanism. Why espresso? Because instead of gradually gaining energy over time, particles gain their energy from a single shot. 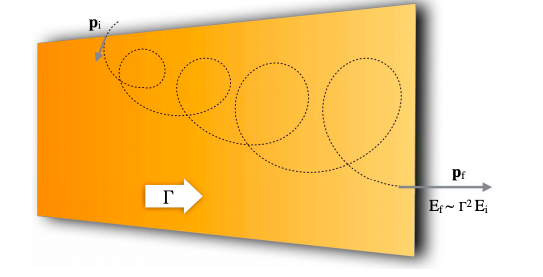 In the “espresso mechanism”, particles gain tremendous amounts of energy from entering a jet for a short period of time. Here, a particle with initial momentum and energy

, and leaves the jet with an energy equal to roughly

Consider an object with a jet, such as an active galaxy. If a low-energy cosmic ray enters the jet (or steam), then it can be shot down the barrel of the jet and get kicked out at much higher energy. In many cases, particle energies can increase by a factor

is the Lorentz factor (this reflects how fast the jet is moving). For some jets, this means particles can exit nearly 1000 times as energetic as they were when they entered the jet.

While this espresso scheme sounds great in principle, many previous calculations have relied on spherical cow treatments of jets, when in reality they are remarkably dynamic and complex structures. 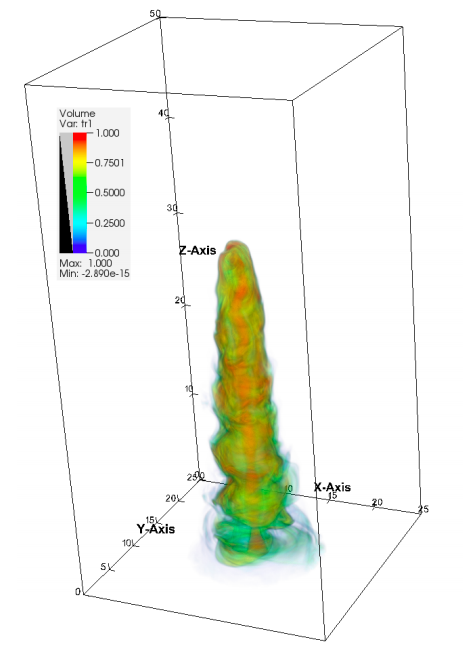 Figure 3 from today’s paper: In realistically modeled jets, material tends to clump in some regions, and these regions of overdensity (color scale in figure) cause the jet to locally move faster or slower.

That’s where the authors of today’s paper come into play. These authors take a simple treatment of the espresso mechanism and complexify it by performing a full magneto-hydrodynamic (MHD) simulation of ultra-relativistic jets. This takes factors like small-scale fluctuations of jet speed and jet density into account, to give a more accurate picture of the dynamics of jets.

By simulating the full structure of jets, the authors find that complex environments don’t weaken the promises of espresso acceleration. In fact, the very imperfections that manifest in realistic jets can help with particle acceleration. What’s more, jet perturbations allow particles to receive double or even triple shots of energy.

Throughout the paper, the authors describe the emergent spectra of espresso-accelerated cosmic rays. In doing this, they find that espresso acceleration is consistent with current measurements of ultra-high-energy cosmic rays in terms of energy, chemical composition, and spatial distributions, an accomplishment which no other model of cosmic-ray acceleration can boast. 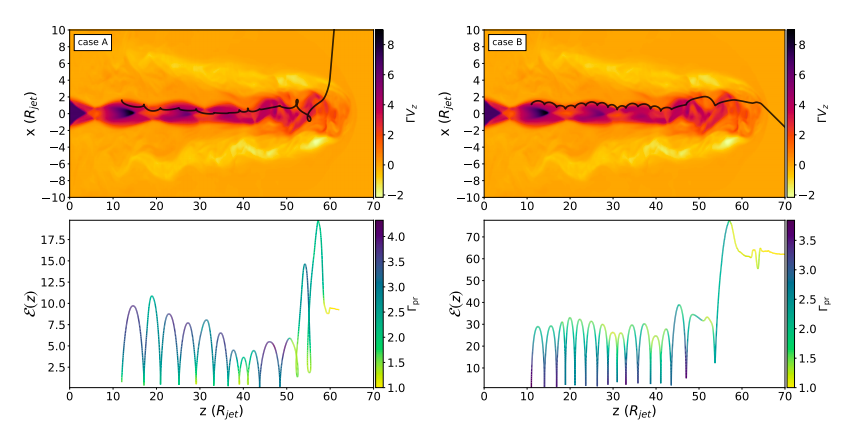 Figure 5 from today’s paper. Sample particle trajectories (black curves) are overlaid on top of slices of the jet, with jet velocity represented by the color in the top panels. Bottom panels show the amount of energy gained along the particle paths, showing that particles can leave jets with much more energy than they entered with.

In light of all of this, it’s probably safe to say that the future of cosmic-ray science will be very caffeinated.