Many Worlds: Multiple Super-Earths Discovered Around a Nearby and Unusually Quiet Red Dwarf

An international team of researchers have discovered two, and possibly three, ‘super-Earth’ sized exoplanets around one of our closest neighbours – a bright and unusually quiet red dwarf star. The team’s observations were obtained as part of the Red Dots #2 project, which aims to discover the nearest terrestrial sized exoplanets to the Sun which they hope will provide the best targets for investigating the atmospheres of small, rocky exoplanets and searching for signs of life outside the Solar System. 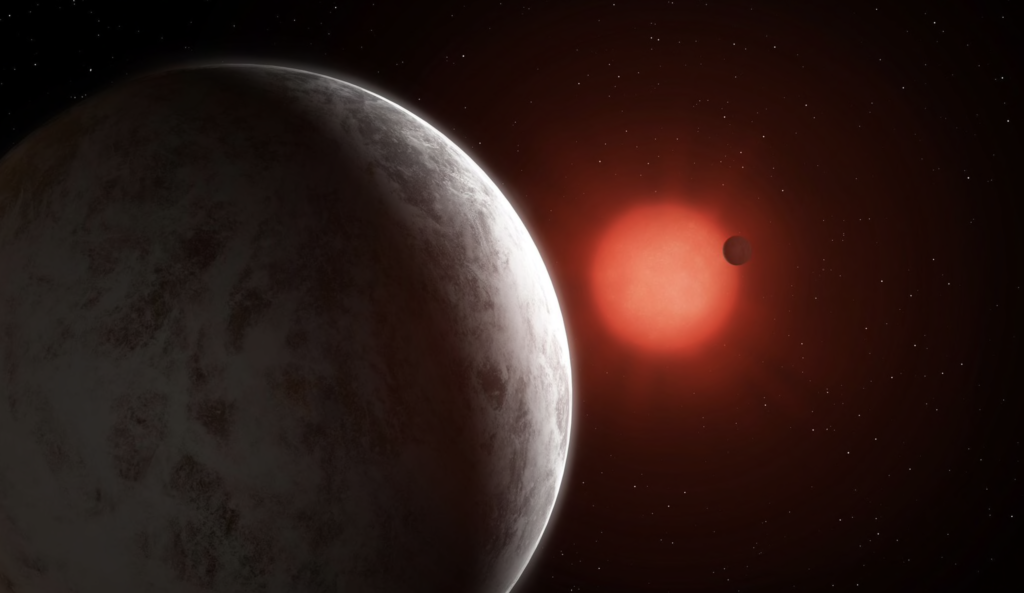 Figure 1: An artist’s impression of the Gliese 887 system with the two newly discovered super-Earths orbiting a bright red dwarf star only 11 light-years from the Sun. Image credit: Mark Garlick.

Gliese 887 is a nearby red dwarf (or M dwarf) star about half the size of our own Sun. Red dwarfs are the smallest, coolest, and by far the most common type of main sequence star in the Galaxy and are found in abundance near the Earth. At a distance of only about 11 light years, Gliese 887 is one of the 12 closest stars to the Sun and also the brightest red dwarf visible from the Earth.

Multiple terrestrial sized planets have already been detected around several nearby red dwarfs: In 2016, the Red Dots team discovered an Earth-mass exoplanet around the closest star to the Sun – Proxima Centauri. Soon after, they announced the discovery of a super-Earth orbiting Barnard’s star, the second closest. In 2019 the team also discovered a system of three planets orbiting the star GJ 1061. Several other teams have also found success, including the now famous TRAPPIST-1 system which harbours an incredible seven (!) Earth-sized worlds. Unfortunately, red dwarfs tend to be highly active stars and a number of studies have pointed out the complications they could pose to habitability such as tidally locked orbits, a lack of sufficient UV photons to sustain photosynthesis and frequent flares along with strong stellar winds capable of stripping away planetary atmospheres and completely sterilising close-in planets. Despite these limitations, red dwarf stars also offer a number of advantages when searching for Earth-mass planets: Their lower mass means that an Earth-sized exoplanet can impart a measurable radial velocity signal, and because they have a lower luminosity, the habitable zone (the region around a star where water can exist in liquid form) is located closer to the host star, placing it in a more accessible region for both radial velocity and transit surveys.

The team, led by Dr. Sandra Jeffers from the University of Göttingen in Germany, observed Gliese 887 nightly over a period of 80 nights using the High Accuracy Radial Velocity Planet Searcher (HARPS) spectrograph at the European Southern Observatory in Chile and supplemented their observations with archival measurements going back nearly two decades. They were looking for the tell-tale wobble of the star due to the gravitational tug of an unseen companion as both bodies orbit the common centre of mass of the system. Such a wobble can in principle be detected by measuring the Doppler shift of stellar spectral features; the light from a source which approaches or recedes from an observer is shifted towards shorter or longer wavelengths respectively, allowing us to infer the presence of a planet. 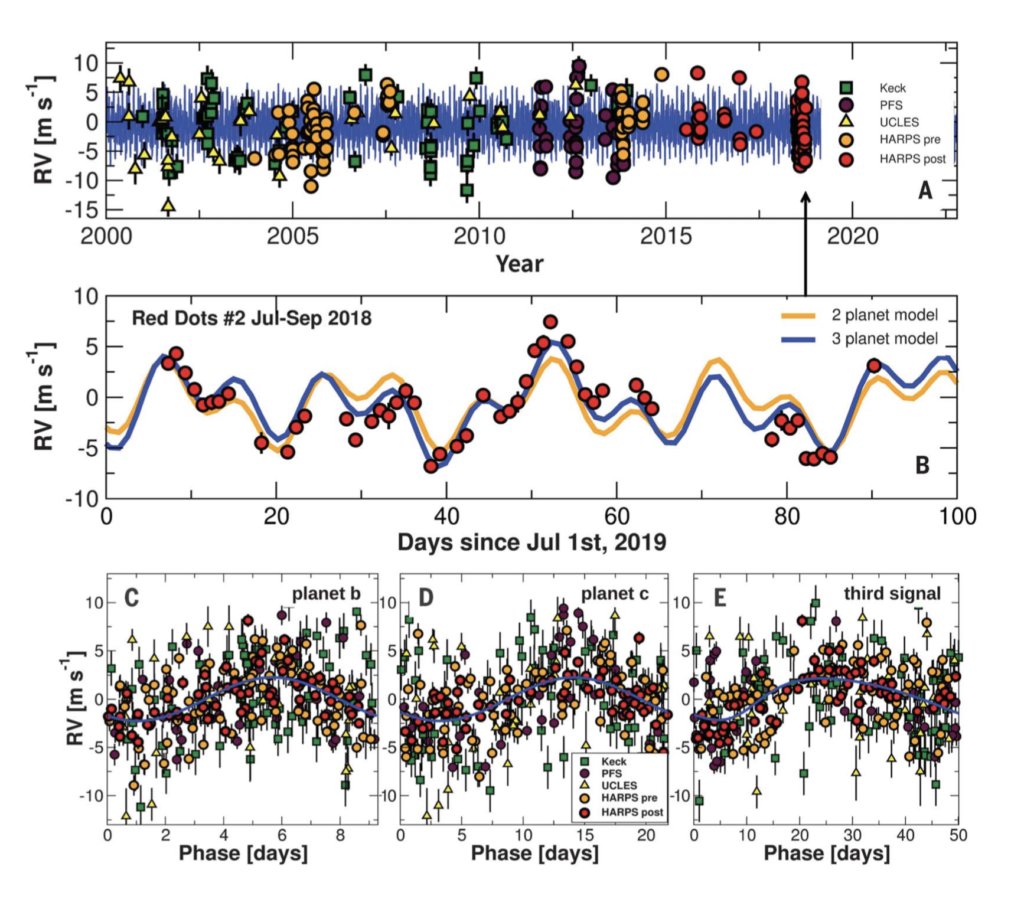 The researchers detected the unmistakeable periodic signals of two exoplanets – Gliese 887b and Gliese 887c – located close to the host star with orbital periods of 9.3 and 21.8 days, and masses of 4.2 ± 0.6 and 7.6 ± 1.2 times that of the Earth respectively. These figures place both planets within the super-Earth category, defined as planets which have a mass exceeding that of the Earth but substantially lower than our own ice giants, Uranus and Neptune. These two newly discovered planets may have a rocky composition and are located close to the inner edge of the stars habitable zone. The team also detected hints of a third planet located further out and potentially within the habitable zone, though they acknowledge that this could also be a false signal related to small stellar variations with a similar period. 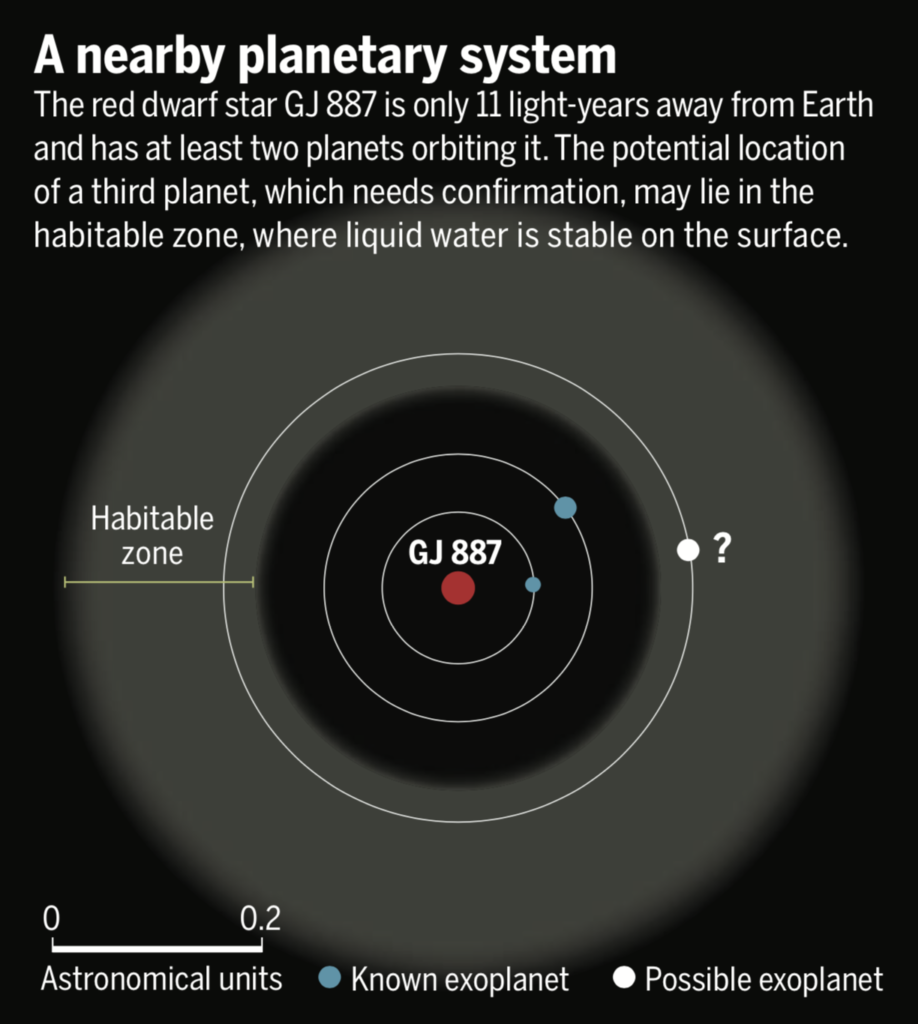 Figure 3: A schematic illustration indicating the orbits of Gliese 887b and Gliese 887c and the potential orbit of a possible third planet within the habitable zone. Image credit: Science Insights; Jeffers et al.

The team also used NASA’s Transiting Exoplanet Survey Satellite (TESS) to monitor the stars activity levels and discovered that Gliese 887 seems almost unique amongst the other nearby stars of its type in that it appears to have unusually low activity, with a photometric variability below 500 parts per million and few starspots. This means that any close-in planets might have been spared from the worst effects of flares and strong stellar winds and could retain thick atmospheres. The general quiescence and low photometric variability of Gliese 887 could also offer improved signal-to-noise for future observations with upcoming instrumentation such as the James Webb Space Telescope and other large, ground-based telescopes.

The team’s findings reinforce the growing realisation that planets, including small, rocky worlds, are common throughout the Galaxy, and will provide excellent targets for future observations which could be amongst the best opportunities for searching for signs of life elsewhere in the Universe.