Title: Populating the Low-mass End of the MBH-Mσ∗ Relation

Dwarf galaxies are believed by some to be time capsules, but instead of old records, they are thought to preserve the seeds of black holes formed in the early Universe. This is because most dwarf galaxies detected in the nearby Universe don’t show signs of interacting with their galactic neighbours, leaving these relatively low mass collections of gas, dust and stars to evolve in isolation. Without contamination from other galaxies, astronomers can treat these dwarf galaxies as pristine pockets of the Universe’s past. So by analysing the distribution and masses of the black holes in these dwarf galaxies astronomers can hope to shed some light on how they formed.

Two formation mechanisms dominate discussion: either black holes formed from the collapse of early generations of stars, known as Pop III’s, or they formed from the direct collapse of gas and dust. If the former mechanism dominates then we would expect to find large numbers of low mass black holes, while the latter mechanism is predicted to produce a much smaller number of higher mass seeds. Unfortunately, dwarf galaxies are much fainter than their higher-mass counterparts so are difficult to detect. The often-invisible black holes within provide an even greater challenge.

An easier way to detect them is waiting for the black hole to accrete material and emit huge amounts of radiation, a phenomenon known as an active galactic nucleus (AGN). Over the past decade, there has been a huge increase in the number of AGN detected in dwarf galaxies. Today’s authors aim to place some of these AGN on a well-known mass & velocity dispersion relation to try and gain insight into how black holes may have formed in the early Universe.

The previous work that the authors draw on takes galaxies from the NASA-Sloan Atlas and identifies any AGN therein using the BPT diagnostic (named after its creators Baldwin, Phillips & Terlevich). This technique compares the ratio of two optical emission line pairs to determine whether the host galaxy’s spectrum is dominated by AGN processes, star-formation processes or is a composite of both. In addition, the objects were also required to have broad-line Hα detections as they are used to calculate the virial mass of the black hole. Aspects of the Hα emission describe the behaviour of the broad line region (BLR), a highly ionised inner region of a galaxy hosting an AGN. Measuring the luminosity and full-width half-maximum of the Hα line can be used to infer the BLR’s radius and velocity of the material therein. With this data, the authors can calculate the black hole mass. From these criteria, the authors identified 8 objects with broad-line Hα and are classified as either Composite or AGN by the BPT diagnostic.

Whilst velocity dispersion can be measured from the Hα broad-line, it is important that this quantity is independent from the black hole mass. So, for each of these AGN the authors used the Keck II Echellette Spectrographer to measure the Mg Ib triplet and, where possible, the Ca II triplet. Where both lines were available, the overall velocity dispersion was calculated using the mean of both measurements. Unfortunately, some galaxies occupy redshifts that cause significant contamination at the Ca II wavelengths, so when the Ca velocity dispersion wasn’t available the Mg Ib value was used.

How low can you co-evolve?

Today’s paper has doubled the number of black holes in dwarf galaxies plotted on the mass & velocity dispersion relation. Figure 1 shows the results of their measurements and compares them to numerous others across the mass spectrum. It is quite striking that all the AGN identified in the sample are consistent with the plotted relations. Finding low mass black holes that lie on these relations can help extend the mass range over which we believe black holes and their host galaxies directly interact. Today’s results show further evidence suggesting that black holes in dwarf galaxies interact in similar ways. With this knowledge, astronomers can better understand how black holes across the mass spectrum grow and interact with their host galaxies. 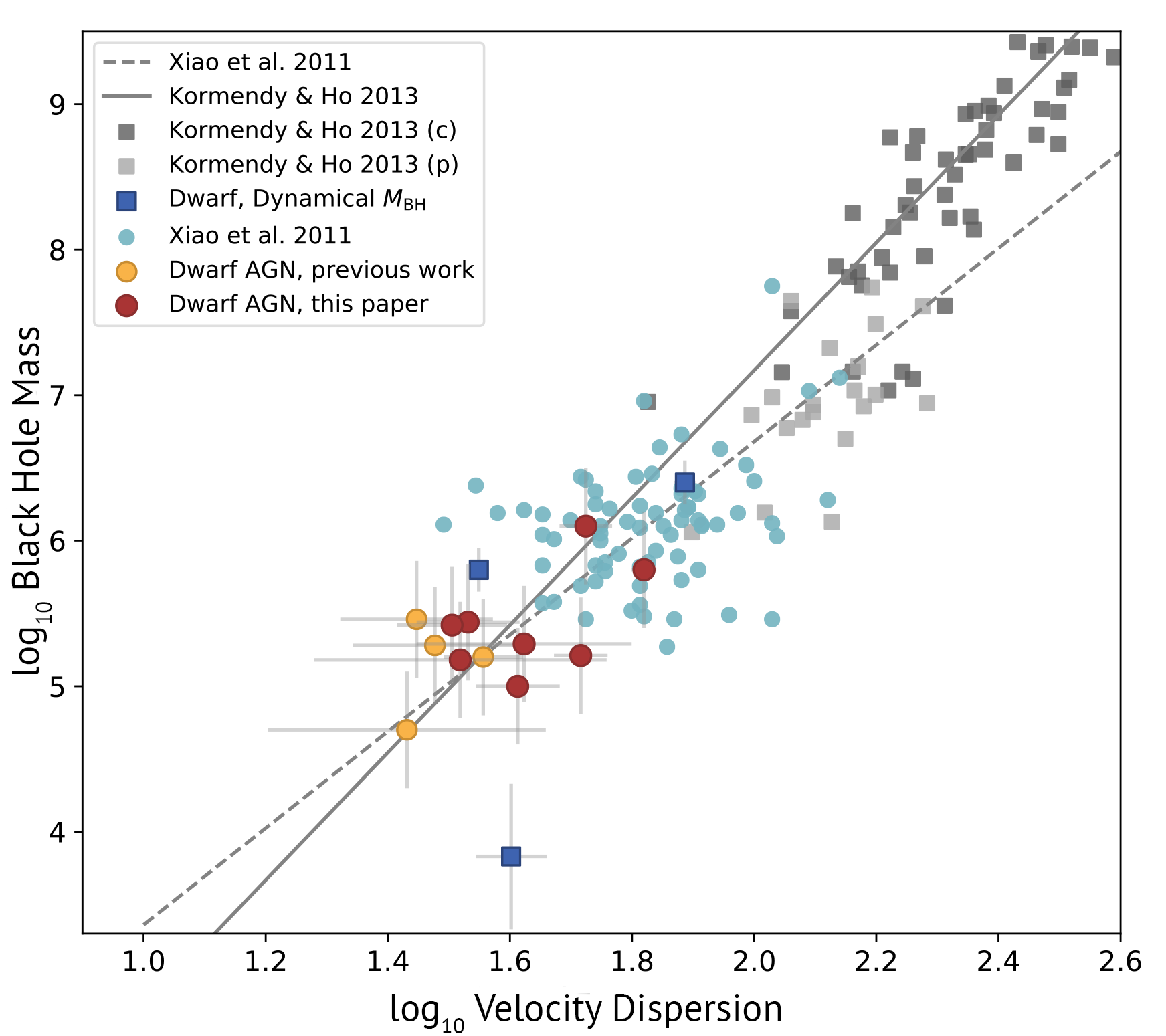 Figure 1: Black hole mass against velocity dispersion for galaxies across the mass spectrum. The two lines represent fits to different galaxy samples: the solid line is to galaxies with bulges, the dashed line is to broad-line AGN.

Whilst this is an amazing result, today’s authors were also interested in what the black hole masses can tell us about how they formed in the early universe. If stellar collapse dominated, then the authors would have expected the black holes to be under-massive and trace out a steeper slope. On the other hand, if direct collapse dominated, then they would expect the black holes to be over-massive and trace out a flatter curve. Unfortunately, the fact that these masses are all consistent with the plotted relationships does not provide a definitive answer towards which mechanism is more likely.

However, the authors do try to draw some conclusions from the single black hole (blue, square data point) at the bottom of figure 1 and fact that their black holes were all found because they were AGN. As was previously mentioned, AGN are black holes accreting material at a high rate which not only causes the black holes to emit radiation but also increases their mass. Because of this accretion, the authors believe their detections might be black holes that more massive relative to the rest of the dwarf galaxy population. The extremely low mass black hole at the bottom of figure 1, however, is not an AGN. So the authors argue it hole is more representative of the dwarf galaxy black hole population. If this assumption is correct it would point towards stellar collapse as the favoured mechanism of formation in the early Universe. Whilst this is an interesting argument, it is still somewhat speculative. Before we can make strong conclusions about how black holes formed in the early Universe, numerous more measurements will need to be made to determine whether such extremely low black hole masses are the exception or the rule.