A Sip of Reionisation to Quench the Smallest Dwarf Galaxies

Title: The Suppression of Star Formation on the Smallest Scales: What Role Does Environment Play?

“No galaxy is an island.”
– astronomers paraphrasing John Donne

Our Milky Way galaxy is surrounded by a collection of smaller galaxies called “satellites” or “dwarfs”, many of which are influenced by its gravitational pull. We have observed many of these dwarfs in exquisite detail using the Hubble Space Telescope, giving us information about their star formation histories. The least massive of these dwarfs, the ultra-faint dwarfs (UFD’s), show evidence of quenching – a process through which a galaxy stops forming new stars – more than 10 billion years ago, or within the first quarter of the Universe’s lifetime! This begs the question: why did UFD’s all systematically stop forming stars so early on in the Universe’s lifetime?

A highly favoured explanation is cosmic reionisation: the era when the first stars boomed into existence in the early universe, transforming it from being dark and neutral to highly irradiated and swirling with ionised plasma (what fun!). This radiation was so strong that these wimpy UFD’s would have had all their gas blown away. And if a galaxy doesn’t have any gas, then it sure as heck isn’t going to make new stars.

Today’s paper focuses on an alternate mechanism for stopping star formation in our local UFD’s – the removal of their gas by the Milky Way. Our galaxy is the big bully of its neighbourhood: satellites unfortunate enough to fall deep into its gravitational potential will likely be “environmentally quenched” due to their gas being stripped away. Interestingly enough, most of the currently known UFD’s are well within the Milky Way’s sphere of influence – since dwarf galaxy infall usually occurs over timescales on the order of billions of years, this would indicate that they started falling in at early cosmic times. Since reionisation quenching and environmental quenching both occur at early times, it is very difficult to know which one dominates. The authors of today’s paper grapple with this exact conundrum: was it the fiery landscape of reionisation that quenched the ultra-faint dwarfs? Or did the Milky Way rob them of their precious gas and cause environmental quenching?

Their approach is elegant: if the time at which these UFD’s fell into the Milky Way can be shown to be before they stopped forming stars, then the Milky Way’s environment was probably what quenched them. If not, then reionisation was likely the culprit! The difficulty is that while the star formation histories of Milky Way dwarfs have been measured, it is nearly impossible to observationally measure their infall times. To get around this issue, the authors turned to the theorist’s favourite toolbox: cosmological simulations! In this case, the ELVIS simulations.

No, not that Elvis . . . “Exploring the Local Volume in Simulations” (ELVIS) is a suite of 48 simulated Milky-Way-like galaxies with thousands of satellite dwarfs, providing a rich sample against which to test the observations. 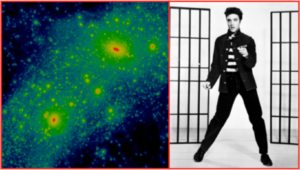 First, the authors selected a sample of 6 observed UFD’s. To understand the effects of the Milky Way on them, they then chose a random sample of 6 similar dwarfs from ELVIS and computed the probability for them to have been environmentally quenched by a certain redshift (or time). Since the simulations keep track of positions and times accurately, it was relatively straightforward to get their infall times and build up a probabilistic framework for the same! By repeating this random sampling 10,000 times to build up stronger statistics, they calculated an average environmental quenching probability for each redshift. This probability measures how likely it was that the Milky Way quenched these UFD’s by a certain time, as opposed to them being quenched by reionisation.

Figure 2 shows that by a redshift of z=1 (about 7-8 billion years ago), the probability that these UFD’s had been quenched by the Milky Way is less than 0.1% – that’s miniscule! Since these dwarfs are known from observations to have turned off star formation before redshift 1, this seems to strongly favour the reionisation quenching argument. 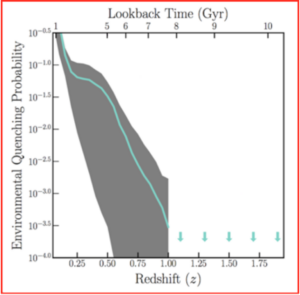 Figure 2 (modified from figure 3 in today’s paper): The blue curve shows the environmental quenching probability as a function of redshift (or lookback time, i.e. how long ago). The scatter of the relation is shown by the grey shaded region. At higher redshifts (z>1), the probability that the Milky Way caused quenching is so low that it’s beneath the y-axis limits, as shown by the blue arrows. Even at lower redshifts, the probability remains small.

The authors note that another way to settle this debate between reionisation versus environmental quenching would be to find distant “field” UFD’s, or dwarfs that are far enough away that they would not be affected by the Milky Way’s environmental influence. If those field UFD’s are quenched, we would know for sure that reionisation was the dominant factor in stopping star formation, as these objects are untouched by the Milky Way. Based on their analysis of the ELVIS suite, the authors predict the existence of >100 of these far-flung “field” UFD’s in our cosmic neighbourhood – but they are sadly too faint to be observable by our current telescopes. However, upcoming deep imaging surveys like the LSST at the Vera Rubin Observatory should be able to discover and observe a majority of these, after which we will likely have a better understanding of the interplay between the two competing quenching effects. Until then, environmental quenching appears to be strongly disfavoured for UFD’s. As effective as the Milky Way can be at stunting the growth of its smallest satellites, reionisation seemingly did have the last (or was it the first?) laugh.