Title: Concepts for future missions to search for technosignatures

How will we ultimately determine whether or not we are alone in the universe? Although the Search for Extraterrestrial Intelligence (SETI) has been active since the mid-twentieth century, our methods of searching could be in need of some modern innovations. Incredible as it may seem, some astronomers are on the hunt for technosignatures—signs of industry or technology due to the presence of other civilizations in the universe. In fact, as NASA considers investing more focus into the search for technosignatures, two workshops have recently been organized on the subject: the NASA Technosignatures Workshop in September 2018 and the NASA-sponsored TechnoClimes 2020 workshop in August of last year. Attendees of the latter workshop came together to author the article at the center of today’s astrobite, which reviews some of their key conclusions about the future of technosignature research.

Whereas there are certainly synergistic opportunities to look for signs of life within the datasets of missions focused on more conventional topics in astronomy, today’s astrobite discusses the possibilities if things were organized the other way around. That is, the authors focus on technologies and mission concepts that would instead be focused on actively hunting for technosignatures, while often providing commensurate benefits for other fields of astronomy and planetary science.

The search for technosignatures can be performed in many different ways that are not necessarily of equal merit. A report based on the earlier conference highlights nine axes of merit (see Figure 1) that constrain practical elements, like cost, and scientific elements, like the lifetime of a technosignature, that can be used to consider the best ways to search. Many have noted the so-called “contact inequality,” or the argument that we are more likely to discover evidence of a highly advanced civilization rather than a less-advanced civilization. The idea is that the most detectable elements—like star-sized engineering projects—would be built using technologies that are greatly advanced relative to what we can currently use to search for them. 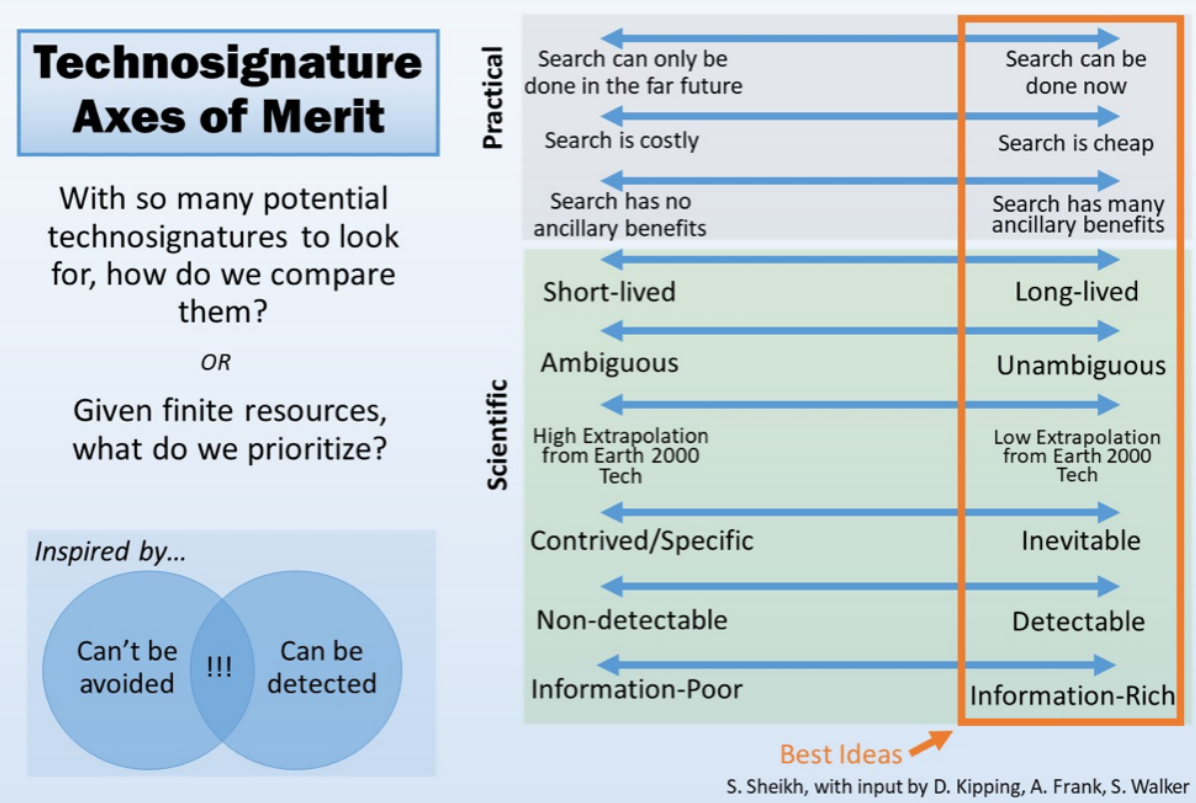 Figure 1 – Technosignature axes of merit representing elements to consider for determining the best search strategies. Figure 1 from NASA and the Search for Technosignatures.

The authors of today’s paper discuss several different approaches to detecting distant signs of intelligent activity. Looking for known byproducts of industry, such as chlorofluorocarbons and nitrogen dioxide, in the atmospheres of exoplanets is something that could potentially be done now (although would require hundreds of hours of observing time) and will become increasingly feasible with future telescopes. At present, PANOSETI aims to search almost the entire sky for short laser pulses, which have no natural sources, but the project could benefit from higher spatial resolution and searching across a broader range of wavelengths. Missions can also look for waste heat, such as that expected to emit from Dyson spheres or swarms that theoretically harness the power of stars. Astronomers using NASA’s Infrared Astronomical Satellite (IRAS) placed the first upper limits on the presence (or rather, absence) of nearby Dyson spheres, but the limited sensitivity of that instrument could be improved in a successor mission. The more traditional SETI method of listening for radio waves would greatly benefit from an eventual radio telescope on the far side of the Moon, where conflicting radio emissions from Earth are almost entirely blocked.

There are also several proposed methods to search for evidence of technosignatures in our own backyard. With close stellar encounters occurring on the order of every 100,000 years, the authors of today’s paper suggest artifacts of ancient civilizations could theoretically be present in our solar system, even near the Earth’s orbit. Some technological remnants could be left relatively undisturbed for millennia on the surface of an airless body, such as the Moon. Current orbital imaging technology to search for such evidence could be done at the extremely high resolution of centimeters per pixel while also providing tremendous advances for geological studies, but would require an onboard AI system that only downlinks the most anomalous of what would be very memory-heavy images. Regardless of some controversial claims about non-natural status of interstellar interlopers like Oumuamua, many scientists agree on the benefits of a “ready to launch” mission for investigating the properties of such objects during their brief passes through our solar system. A final focus is put on the study of asteroid polarimetry, since very high linear polarizations of light might only be expected from flat metallic surfaces that could be artificial. Such a survey should focus on locations where interstellar objects could theoretically have been gravitationally captured and incorporated into the Asteroid Belt or Jupiter Trojans.

These authors also explore a novel way of comparing various technosignature search methods (see Figure 2). What they call the ichnoscale quantifies the relative footprint of a technosignture compared to that humanity can currently produce, so the units are multiples of current Earth technology. This parameter is plotted over the number of searchable targets, for example, the number of exoplanets whose atmospheres can be studied, or the number of stars that can be surveyed for radio signals. Technosignatures can be either continuous (observable over long durations), such as megastructures orbiting a star, or discontinuous (short in duration), such as a laser pulse. The authors suggest that a continuous technosignature in the bottom right corner of the plot would have the best combination of being most abundant (because it requires less-advanced technology) and having the greatest number of searchable targets. Although none of the proposed signatures fit that description, all are found near the bottom right portion of the plot, suggesting there are many hypothetically reasonable approaches but each has their own pros and cons. 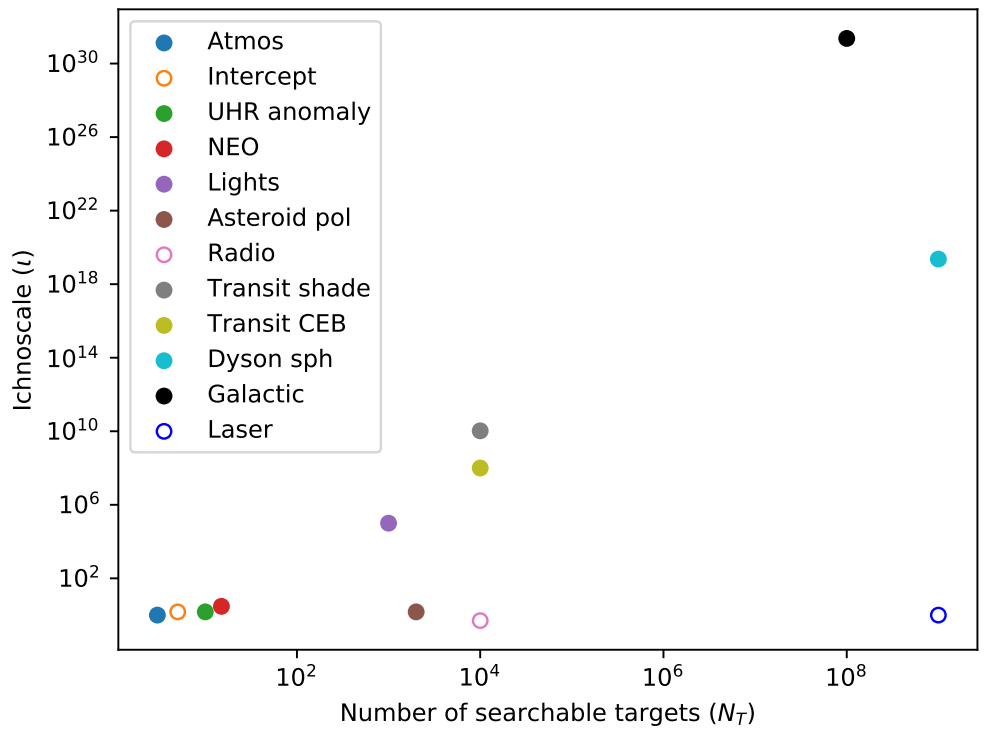 Although many relevant technologies are on the cusp of necessary improvements, the present search for technosignatures in existing data can benefit from improved analyses of light curves from transiting exoplanets, the spectral signatures of their atmospheres, their possible night-time illumination, and network analyses to understand what parts of the universe would be more likely to become hot spots of activity based on various aspects. Many ideas for detection, whether direct or indirect, may seem far-fetched. However, it is important to remember that even continued non-detections would go a long way toward identifying the rarity of intelligent life in the universe, and hold immense implications for the future of humanity. Our situation may be far more precious and precarious than much science fiction would have us think, or we may be quickly approaching an extraordinary era of intercivilizational contact.