Most Sun-like stars are thought to be home to a hot rocky exoplanet – that could mean that there are more than 300 million potentially habitable planets in our galaxy! However, whether any of these planets have atmospheres remains unknown. Unlike the Blue Marble we call home, the way that many of these planets form leaves them as dead rocks.

Most terrestrial planets larger than Earth (known as super-Earths) are thought to form as sub-Neptunes, consisting of a silicate magma ball surrounded by a thick atmosphere accreted from the planetary disc during formation. Because this atmosphere is dominated by light hydrogen molecules, it has a low mean molecular weight (

, the average weight of each molecule in the atmosphere) and is later lost to space via atmospheric escape, leaving behind the bare super-Earth. While it’s possible for planets to regain an atmosphere via volcanic activity or impacts from comets, what if there was a way for super-Earths to develop atmospheres while they evolve from sub-Neptunes?

Today’s paper explores a potential pathway that can not only generate super-Earth atmospheres, but could allow them to be retained for billions of years.

The authors consider what happens to the products that form when a sub-Neptune’s magma reacts with its atmosphere. Iron oxides in the magma react with the atmospheric hydrogen, producing water, and iron, which sinks to the planet’s core. While some of this steam escapes into the atmosphere and mixes with the hydrogen, most of it dissolves and remains trapped in the magma, creating a planet made up of a slightly watery magma ball surrounded by a slightly higher mean molecular weight atmosphere. But as the atmosphere begins to escape, what happens to the water? 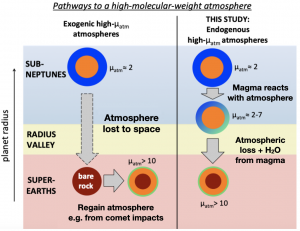 Figure 1: A graphical representation of the potential pathways a sub-Neptune can take to become a super-Earth with a high mean molecular weight (

atmosphere. The right-hand side shows the pathway outlined in today’s paper, with a sub-Neptune evolving to a super-Earth with a water dominated atmosphere via atmosphere-magma interactions. In each pathway, the sub-Neptune moves across the Radius Valley, decreasing in radius as it goes. Adapted from Figure 4 in the paper.

Using models of planets, the atmospheres of each planet are removed in small steps, reassessing the equilibrium between the magma and the atmosphere each time. With each step, the pressure at the surface of the magma decreases, allowing some of the gases trapped there to escape. As the atmospheric loss continues, the model atmosphere gets thinner and thinner, while the large reservoir of H2O dissolved in the magma continues to be released. As outlined in Figure 1, over time the hydrogen will be completely lost, leaving behind a 150-500 km thick atmosphere and a water dominated world! This kind of watery atmosphere can be referred to as being endogenic as it originates from within the planet, as opposed to the exogenic atmospheres created by external processes, like being hit by an icy comet.

The length of time for which a planet has a water dominated atmosphere depends on how aggressive the atmospheric loss is. While smaller planets very close to their stars are at higher risk from atmospheric loss, planets at greater distances from their stars are safer and may never endure the process. Planets in between these extremes are able to keep hold of their newly acquired H2O dominated atmospheres for varying lengths of time, but could potentially retain them for billions of years. So which planets can we expect to have watery envelopes?

When plotted on a graph of planetary radius v.s. orbital period, the larger radius sub-Neptunes and smaller radius super-Earths are separated by a lack of planets often known as the Radius Valley. As a sub-Neptune loses its atmosphere its radius decreases, moving it down through the Radius Valley. The authors predict that provided the planet has a long enough period, and the interactions between magma and atmospheres are sufficiently efficient, the evolving planets that are able to retain H2O-dominated atmospheres should be found lining the Radius Valley in a “water-belt”, as seen in Figure 2. 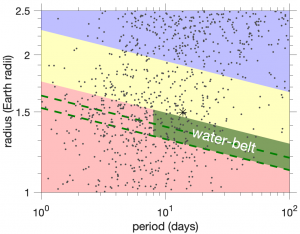 Figure 2: The “water-belt” of super-Earths, shown in period-radius space for planets orbiting stars less than 3 Gyrs old. The blue region shows the area occupied by sub-Neptunes, while the red region shows the area occupied by super-Earths. The yellow region in between is known as the Radius Valley. The water-belt, where super-Earths with water dominated atmospheres may exist is shown in green. The upper and lower dashed lines give the water-belt predictions for magmas with lower and higher amounts of iron oxides present. Figure 3 in the paper.

Testing whether such planets exist could be relatively straight forward. Directly detecting the atmosphere of this kind of planet may be possible using a phase curve – a measurement of the light reflected and blocked by a tidally locked planet as it passes behind and in front of its host star. If the planet has retained the watery atmosphere, then heat can be more effectively distributed from the permanently illuminated dayside to the cold, dark nightside, leading to a smaller temperature difference between the two faces than would be the case for a bare, atmosphere-free rock. As endogenic atmospheres are likely to have smaller carbon to oxygen ratios than those on other super-Earths, observing the spectroscopic features of these atmospheres with the upcoming James Webb Space Telescope could also help distinguish between the two!

Stirring Up Hurricanes on Other Worlds