Title: Search for lensing signatures in the gravitational-wave observations from the first half of LIGO-Virgo’s third observing run

Status: Submitted to the Astrophysical Journal; Available on Arxiv

The gravitational attraction of clumps of matter like galaxies and clusters has the power to act as a lens, bending and curving light coming from a luminous source behind it. This phenomenon, known as ‘Gravitational Lensing’, can completely distort images of the light source, either by magnifying and extending it into rings (known as Einstein rings), or by generating multiple copies of it distributed around the lens like a cross (Figure 1, bottom). Studies of gravitational lensing have helped inform us about a wide array of astrophysical phenomena, including dark matter, the Hubble constant, galaxy evolution, to name a few. 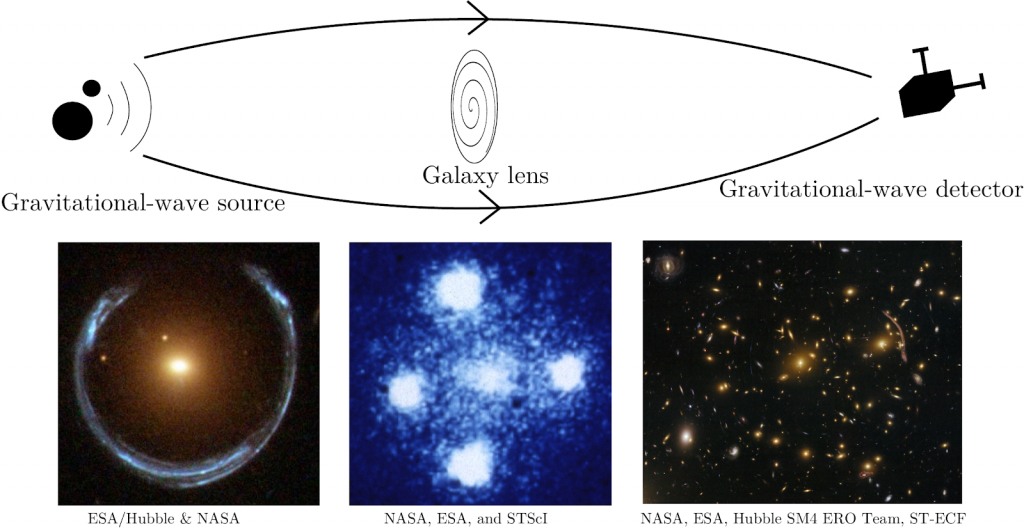 Since 2015, LIGO and Virgo have opened a new window to study the universe through gravitational waves, ripples in spacetime caused by pairs of compact objects such as black holes and neutron stars spiraling into one another. These observatories record a characteristic chirping strain signal, lasting from a few seconds to a few hundred seconds that rises in frequency as the two objects get closer and finally merge. This peculiar waveform pattern holds the key to unlocking several parameters of the binary, such as the masses and spins of the objects. In addition, its amplitude and relative phase in two detectors can tell us the sky location of the merger, as well as its distance away from us. Mergers closer to the Earth appear louder in the gravitational wave detectors. To date, LIGO-Virgo have announced the detection of over 50 binary black holes and 2 binary neutron star mergers in its latest catalog of events, dubbed the ‘O3a’ catalog.

What effects does a lensed Gravitational wave event show?

Unlike optical light which appears distorted in a lensed image, gravitational waves are recorded as a time-series and show different effects under lensing. An incoming gravitational wave chirp that gets lensed can get affected in the following ways: (i) The signal can get amplified, which leads us to believe that it is coming from a merger that is closer to us and has heavier masses, or (ii) We may detect multiple copies of the same event signal. The former may provide an explanation for some exceptionally heavy binaries observed, such as GW190521. In case of the latter, the duplicate signal can arrive anywhere from a few minutes, to several days or even years apart, depending on the nature of the lens. Gravitational microlensing can even make copies of a signal appear slightly shifted but overlapping with the original signal.

An important advantage of gravitational wave lensing is that it lets us probe deeper into the universe: events that would normally be too faint to detect being at large distances can get amplified and show up in LIGO-Virgo data due to lensing. Figure 2 shows how the presence of lensed events can contribute to our understanding of the rate of compact binary mergers at different redshifts. 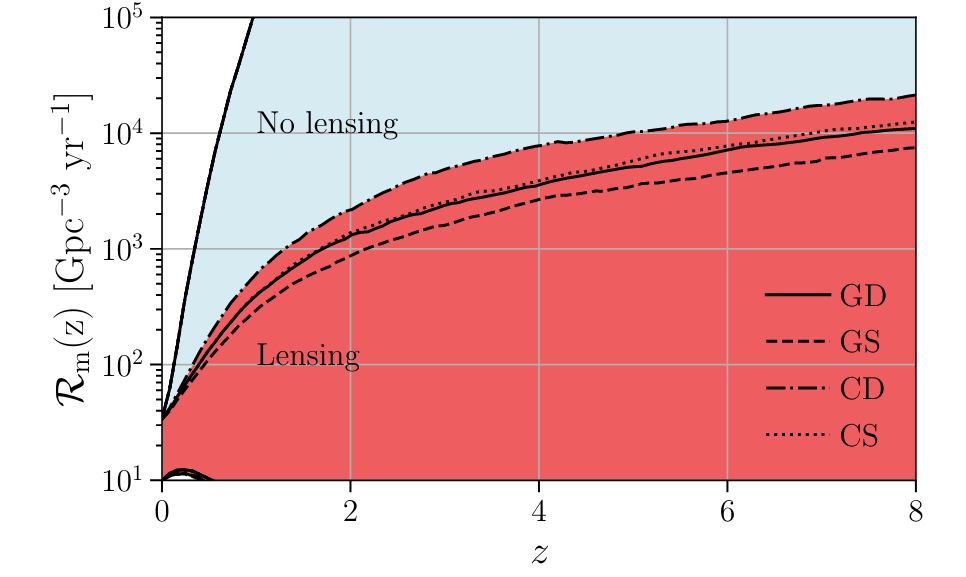 Figure 2: The merger rate (number of events per year in a volume of 1 cubic Gigaparsec) of compact binary sources as a function of redshift. The vast expanse of the blue region indicates our lack of knowledge of the merger rate at large redshifts in the absence of amplified, lensed events. With lensing, we can better constrain the merger rate just by observing more events from larger redshifts (red region). The different lines indicate different types of lenses (G: Galaxy, C: Galaxy cluster, S: single, amplified lensing, D: duplicated signal due to lensing) – Figure 1 from the paper.

With a population of gravitational wave events being recorded over the past few years, LIGO-Virgo researchers have done a thorough analysis of all available data to check whether any detected signals show signs of being amplified due to lensing, or are duplicates of a previously detected event. In order to find duplicates, they ranked all possible pairs of events in terms of their similarity and the likelihood of the time delay between them being due to lensing (Figure 3). 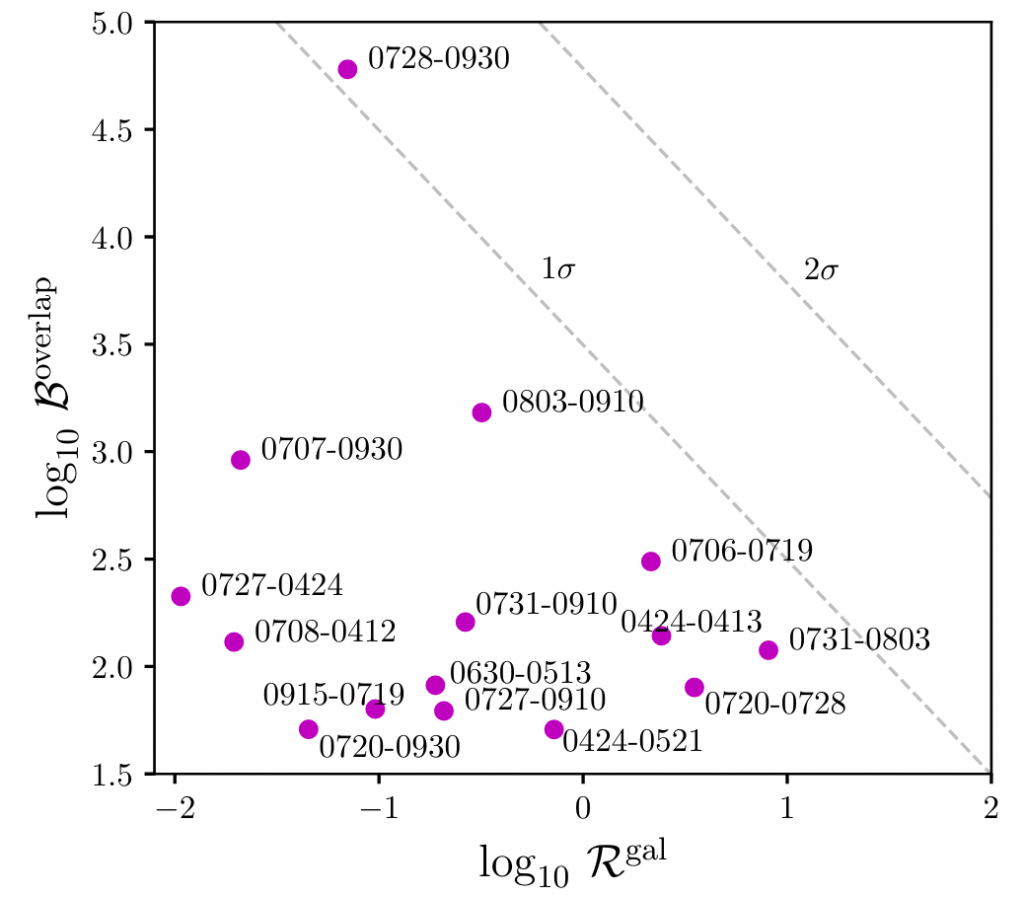 Figure 3:  Pairs of events that can possibly be lensed duplicates of each other, scattered according to the similarity between their waveforms (y-axis) and the likelihood that the time delay between them is due to lensing (x-axis). A real, lensed event pair will lie far on the top-right corner, beyond the boundaries of this plot. Figure 3 from the paper.

Even the most likely-lensed pairs from the O3a catalog are not statistically significant candidates for being actual lensed duplicates of each other. Tests for other forms of lensing, including signal amplification and microlensing also do not yield adequate evidence of lensing from the O3a catalog events. As illustrated in Figure 2, even the non-detection of lensing helps us fill in important gaps in our knowledge regarding the distribution of compact objects in our universe. Hovering the magnifying glass over even more gravitational wave detections in the future may one day fill in these gaps through a direct observation of gravitational wave lensing.