How do you see a firefly next to a spotlight?

A huge amount of effort goes into designing and manufacturing high-quality telescopes and instrumentation so that astronomers can have the best possible data. Then a similar Herculean effort goes into analyzing this data and understanding the underlying physics of the phenomena observed.

A third layer of brilliance also exists: this is the range of ingenious observational techniques and tricks employed by astronomers and telescope operators to gather data. These vary across wavebands and allow us to push the capability of the hardware beyond its typical limits.

Examples of such work include the combining of different telescopes to simulate one large telescope (e.g. the EHT) or the use of clever adaptive optics (AO) techniques to squeeze out some more performance percentage points.

The techniques described by the authors of today’s paper, used to directly image exoplanets, are collectively known as differential imaging. The direct imaging of exoplanets, due to the proximity to their relatively bright host stars, is often compared to trying to see a firefly next to a spotlight. The bright source, and the resulting speckles from the atmospheric turbulence, dominate the signal in the vicinity of the star.

So how does this work? There are quite a few new acronyms in the next section, but bear with me!

There are two key types of differential imaging, both described nicely in the context of SPHERE here: 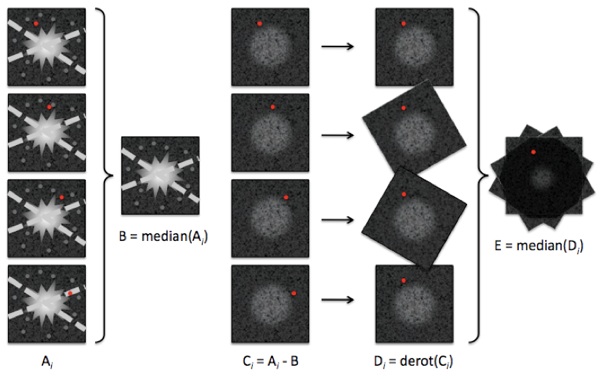 So what were the results?

It might not surprise you that the different combinations of ADI and SDI generally outperformed the basic techniques on their own.

The large range of results in the paper are complex and include analysis on the signal to noise ratio (S/N), noise components, model completeness, dependencies etc., so I have picked out a few key plots based on the S/N to illustrate the general performance differences.

For the targets under test, using a combination of ADI and SDI consistently achieved better results than using ADI alone. SADI and ASDI performed similarly but target-specific differences can occur. In all tests, CODI achieved the highest S/N and constantly performed slightly better than SADI or ASDI.

Throughout the paper they reference their use of the Python package PynPoint, so if you’re a Pythonista and want to learn more about these techniques follow the link!

I'm a DPhil student at the University of Oxford, UK, in the Department of Astrophysics as part of the HARMONI team. I specialise in optical instrumentation for astronomy, and also get to do some science with observational data. In my career so far I’ve built telescopes for imaging the earth from space, and now I’m helping to build an instrument for imaging space from the earth using the world’s largest optical telescope, the Extremely Large Telescope (ELT).

Searching for Signs of Plate Tectonics in Polluted White Dwarfs