Observations have shown that the stars in our Universe are not always gravitationally bound to a galaxy. In addition to being surrounded by an invisible halo of dark matter, galaxies can also be surrounded by stellar haloes. Stellar haloes are a roughly spherical, diffuse component of matter and are composed of stars that have been displaced from their parent galaxies due to the violent process of galaxy mergers (see this post for recent work on stellar haloes). While the total mass of stellar haloes surrounding galaxies tends to be much less than the mass of the galaxies themselves, stellar haloes are thought to encode important information about the merger history of a galaxy and its dark matter halo, and have the potential to provide clues on how a galaxy has formed.

The authors of today’s paper use cosmological simulations to investigate whether different merger histories of galaxies can explain the large diversity observed in the properties of present day stellar haloes.

Testing whether a system’s merger history has an effect on its present day stellar halo is challenging to do in isolation. To cleanly isolate the effect of a galaxy’s formation history, today’s authors employ a technique known as ‘genetic modification’ (see this astrobite for a comprehensive overview of the technique). Genetic modification is a technique that is used in combination with cosmological simulations, and essentially allows for a controlled experiment to be run which can cleanly test the effect of different merger pathways on a resulting galaxy’s properties.

Briefly, this method works by selecting a dark matter halo that has formed in a cosmological simulation and has been evolved to the present day. This dark matter halo’s history is then traced back to the beginning of the simulation, allowing the authors to identify the overdense region from which the halo originally formed. Once this initial region is found, it is isolated and altered. By slightly altering a small spatial region of the initial conditions and then rerunning the simulation, the authors are able to test the effect of changing the formation pathway of the individual halo on the present day galaxy properties, since this initial modification can affect the properties of the mergers that the system experiences over cosmic time. The final mass of the system and the surrounding large scale structure remains largely unaffected for all of the different modified cases–all that changes is the specific path the halo took to reach its final mass!

The specific modifications tested in today’s paper are applied to two different reference systems: one late forming dark matter halo and one early forming (referred to as Late Former and Milky Way-like respectively in the paper). The modifications applied to the Late Former object result in different timings of its major mergers, whereas the modifications applied to the Milky Way-like system result in changes to the masses of the haloes that it has merged with in the past. The idea here is to test what effect these various merger scenarios have on the present day stellar haloes of these systems, with everything else held equal. 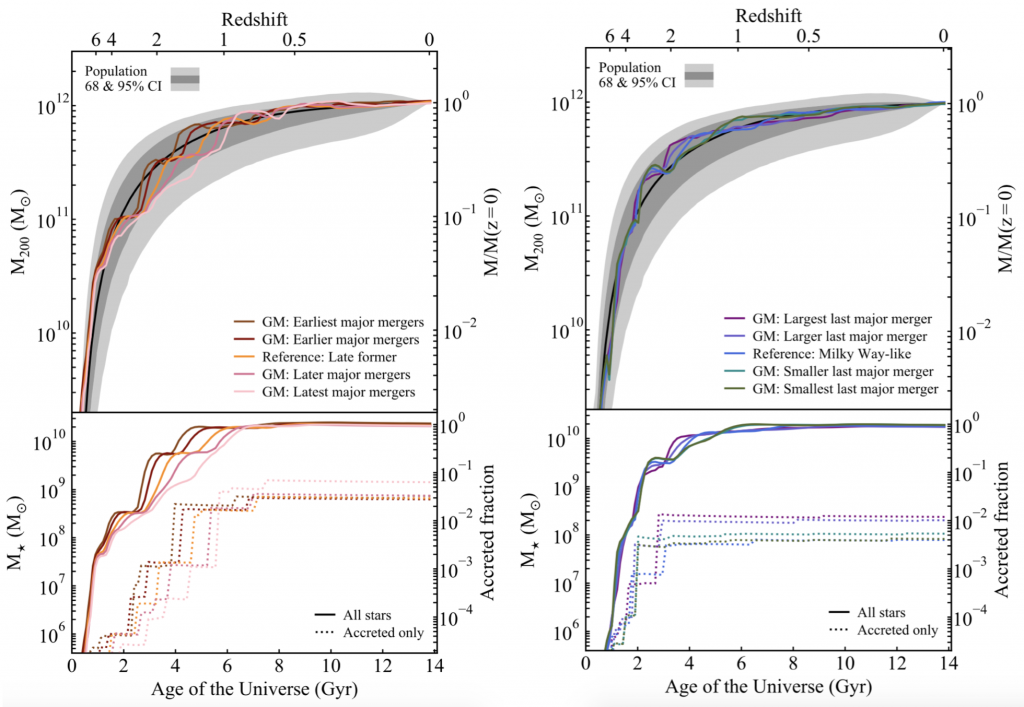 Figure 1. Mass growth over cosmic time for the two systems tested in this work and their various genetically modified (GM) histories (Late Former system on the left panel, Milky Way-like on the right). The dark matter mass evolution is shown in the top panel whereas the stellar mass evolution is plotted on the bottom panel. The Reference, unaltered mass growth for each system is shown by the orange (left panel) and blue (right panel) lines, with the median mass growth for dark matter haloes shown in black. Variations to these reference conditions using the genetic modification technique are plotted in the other colours, with the details of the modifications listed in each legend. Adapted from Figures 2 and 3 of the paper.

Effect on the resulting stellar halo

Now that the authors have selected and modified their chosen systems, they can look into how changes to merger histories affect the present day stellar haloes. Specifically, they investigate how the fraction of mass in the stellar halo varies for each of their systems, and then compare these to observed stellar halo fractions of similar mass galaxies in the Local Volume (a volume that contains around 500 galaxies within 10 Mpc of the Milky Way). 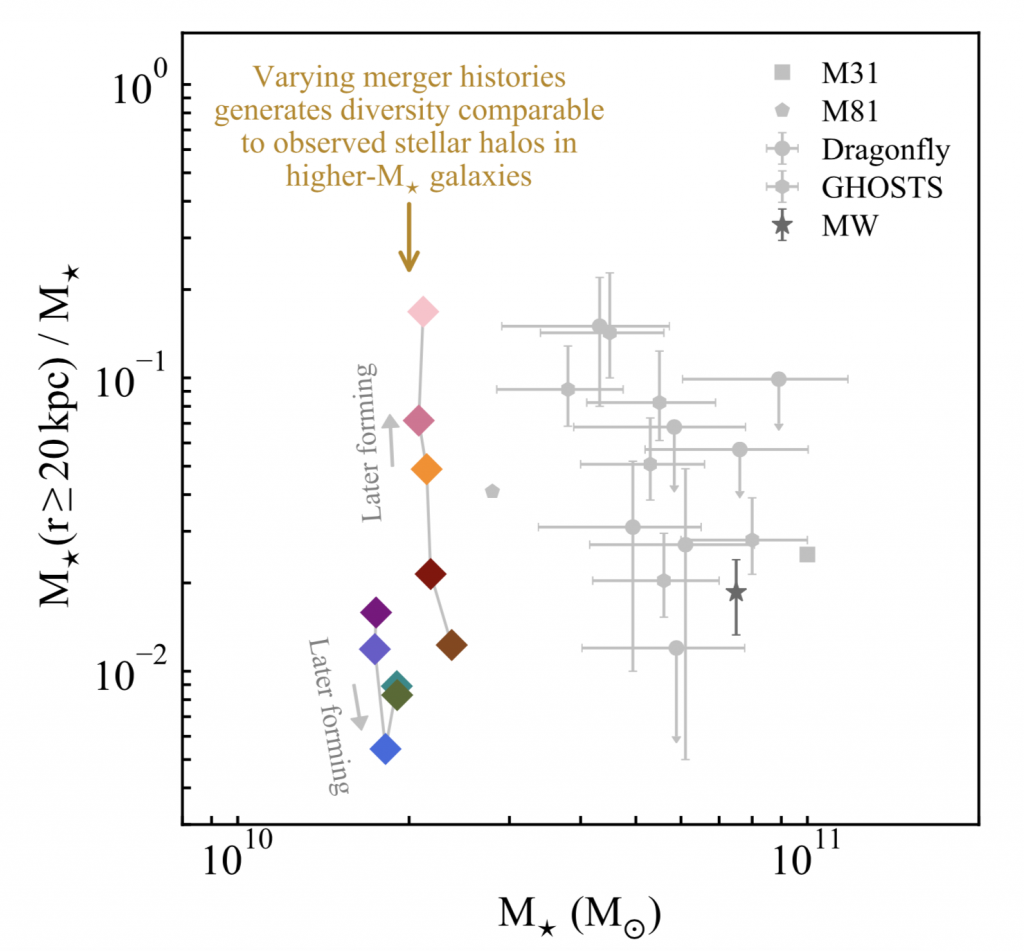 Figure 2. The fraction of mass in the stellar halo plotted against the stellar mass of the galaxy. Observations of stellar halo mass fractions for galaxies of similar stellar masses are plotted in grey, and the simulated systems are plotted in blue-green (Milky Way-like) and brown-pink (Late Former), with the colour scheme being consistent with Figure 1. The grey arrows show the increasing formation time of the dark matter halo in each system, which is altered by the genetic modifications. For the Late Former, this is a clear correlation between the stellar halo mass fraction and the formation time of the dark matter halo. Figure 4 in the paper.

In summary, today’s authors have leveraged the genetic modification technique to show that systematically varying merger scenarios can reproduce the scatter seen in observations of the stellar halo mass fraction. While this result supports the idea that there is a fundamental link between stellar haloes and the merger history of systems, the results also highlight the challenge in summarising this scatter through a one-point statistic. Galaxy formation is a complex process, and stellar haloes appear to be sensitive to the entire range of past merger interactions, making characterising the diversity of stellar haloes a fun (but challenging) pursuit!