Status: Accepted for publication to the Astrophysical Journal

In 1967, a graduate student named Jocelyn Bell discovered the first pulsar, a neutron star spinning incredibly fast and emitting beams of radio waves from its magnetic poles. As the beams sweep across our line of sight, we see this emission as pulses. Half a century later, we know of thousands of other pulsars, including gamma-ray emitters, cannibalistic pulsars and even pulsars with planets.

However, pulsars aren’t the only objects we see emit pulses of radio waves. AR Scorpii, a red dwarf-white dwarf binary, pulsates at three distinct periods thanks to the orbital and rotational motion of the system and interactions between the two stars. Astronomers have also discovered radio pulses coming from isolated main sequence stars, dubbed “main sequence pulsars” or “main sequence radio pulse emitters”. Only seven of these objects are known, including the prototypical main sequence pulsar called CU Virginis, a fast-rotating, chemically peculiar A-type star only 70 parsecs from Earth. Today’s paper presents new observations of CU Vir and proposes new explanations for some particularly unexpected behavior.

Main sequence pulsars are believed to produce pulses through a process known as electron cyclotron maser emission, or ECME for short. It’s a rare phenomenon seen in certain stars with strong magnetic fields. In the middle portion of a star’s magnetosphere, electrons traveling along field lines at the star’s magnetic equator undergo population inversion as electrons are forced into high-energy states, allowing them to sustain gyrosynchrotron emission. This emission can occur in a variety of regions with different magnetic field strengths, and since the frequency of the radiation is proportional to the magnetic field at a given point, the relativistic electrons generate emission at a variety of frequencies, creating a broadband signal. As the star rotates, the signal appears to pulsate as the beams sweep across our line of sight. 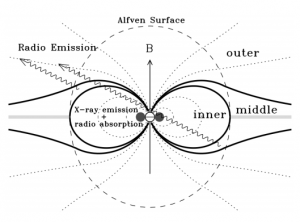 ECME radiation should be circularly polarized, with one magnetic pole responsible for right circular polarization (RCP) and the other responsible for left circular polarization (LCP). Despite being the first known main sequence pulsar, CU Vir only seemed to produce right circularly polarized light, which seemed to indicate that only one magnetic pole was active in ECME. The authors of today’s paper wanted to investigate this weird behavior further, as well as probe the star at sub-gigahertz frequencies – something which had only been done once. They used the upgraded Giant Metrewave Radio Telescope (uGMRT) to observe CU Vir at bands between 300-900 MHz, complementing that data with observations by the Very Large Array (VLA) covering 1-4 GHz. The results? An combination of the mostly mundane and the utterly unexpected.

Both telescopes were able to detect left circularly polarized pulses across a wide range of frequencies. Surprisingly, while LCP emission is weak above GHz, it’s the dominant type of emission below 800 MHz! This turned out to be just one example of how the LCP and RCP pulses behave differently at different frequencies. The authors also found that normal ECME RCP emission from CU Vir cuts off above 3 GHz, while the LCP emission cuts off somewhere near 1.5-2 GHz. However, there also appears to be an additional RCP pulse visible above 2.3 GHz and potentially as high as 8.4 GHz, suggesting that the ECME models of CU Vir may be incomplete. 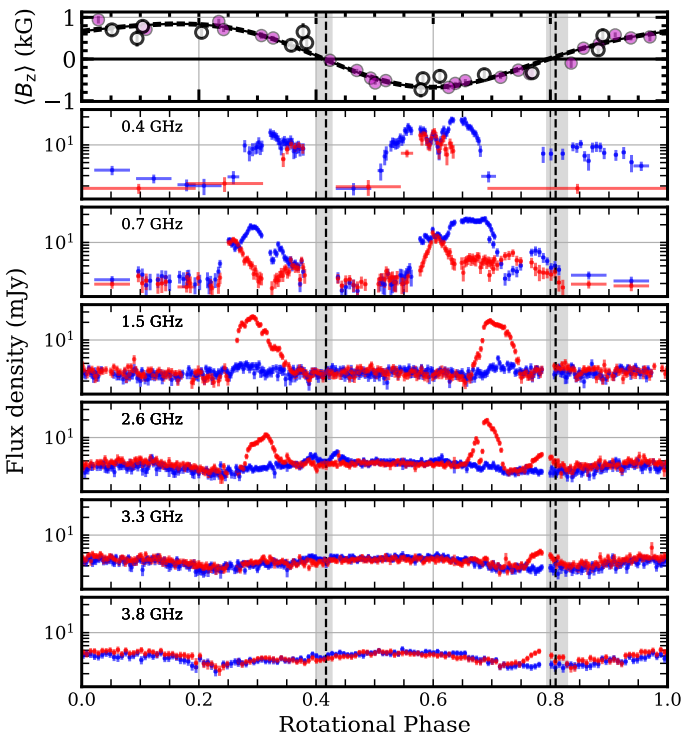 The low-frequency observations provided more evidence that the structure and shape of ECME pulses are strongly frequency-dependent – a phenomenon we also see in many pulsars. They also provided evidence of weaker features in both polarizations of CU Vir’s light curves, some of which persist for many rotation periods and some of which appear once and are never seen again. One extreme example was a “giant pulse” found in one day of LCP observations, approximately an order of magnitude brighter than any other pulse – another feature seen in some pulsars. The CU Vir giant pulse may be a sign of centrifugal breakout (CBO) of plasma escaping from the inner portion of the star’s magnetosphere. Understanding CBO is key to modeling stellar magnetospheres, but it can be hard to observe; it’s now possible that ECME pulses can open a window into detecting it.

The uGMRT observations at 400 MHz also revealed a second set of LCP pulses in each rotation. Coupled with the giant pulse, numerous transient features and the significant differences between pulses of different polarizations, the processes behind ECME in UC Vir are clearly much more complicated than expected. The authors suggest that some of this behavior could be attributed to effects from the pulses propagating or even from a second ECME engine, a possibility that begs many fascinating questions. Will broadband studies of other main sequence pulsars reveal similar phenomena? How many other magnetic stars emit giant pulses? What are the the transient features seen in CU Vir’s light curves? With the GMRT fully upgraded and advanced telescopes like the Next Generation VLA on the horizon, we have a lot to look forward to.