Pulsar planets were the first type of planet ever discovered beyond the solar system, and it shocked the astronomical world.  These were not the planets we expected: solar system-like planets around a Sun-like star.  Instead, these planets orbited a pulsar, a rapidly rotating neutron star (the extremely dense core of a massive star that exploded as a supernova). However, since their initial discovery in 1992, only five such pulsar planets have been found, making them quite rare.  Fewer than 1% of pulsars have been found to host planets.  In this paper, the authors explore how these planets may have formed as a way to explain the rarity of pulsar planets. 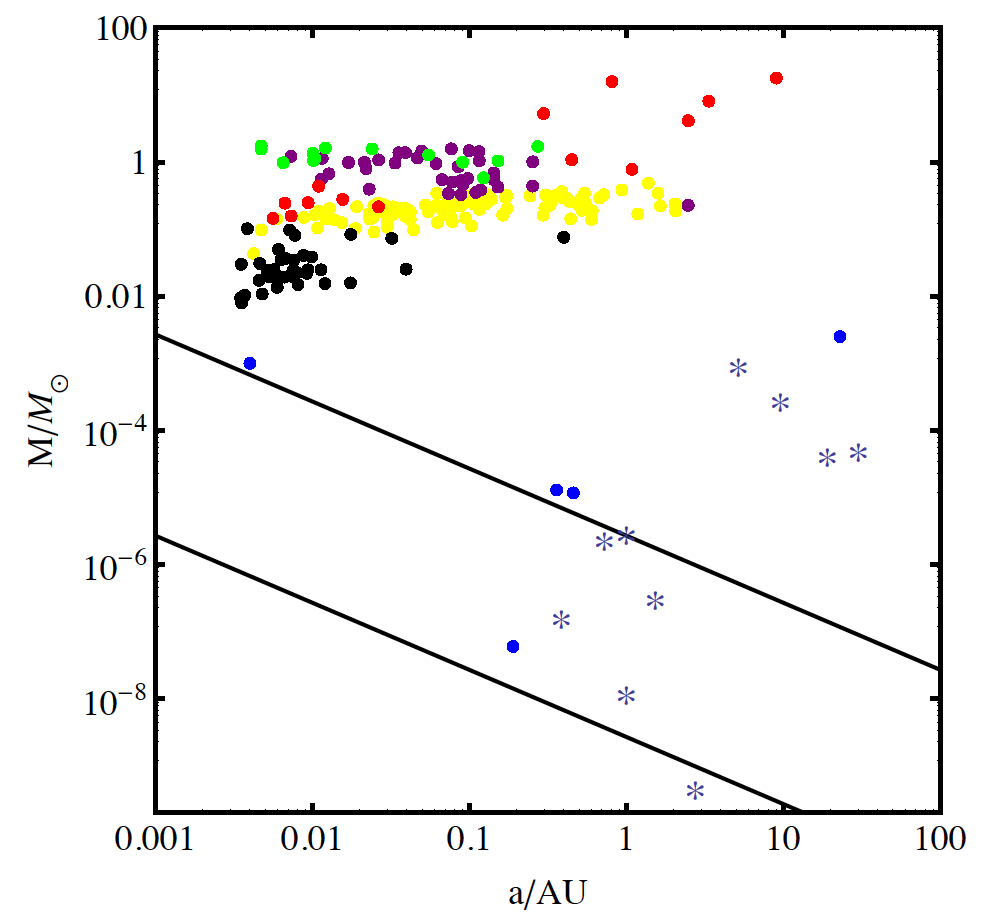 Figure 1:  The mass and semi-major axis of pulsar companions in colored circles (blue for confirmed planets, red for main-sequence stars, black for low-mass stars and brown dwarfs, green for neutron stars, purple for heavy white dwarfs, and yellow for low-mass white dwarfs).  The violet asterisks are the eight planets, the Moon, and the asteroid belt dwarf planet Ceres for reference.  The black lines are the detection limits for fast, millisecond pulsars (bottom line) and more normal pulsars (top line).

The authors determine that pulsar planets are likely formed only when there is a low mass companion star to the neutron star.  Almost every star with enough mass to become a supernova is born with a companion star. However, only 10% of the companions have a low enough mass to make pulsar planets a realistic possibility.  Of these, only about 10% are able to survive on a gravitationally bound orbit after the massive star goes supernova.  This means that only ~1% of neutron star progenitors (stars that eventually become neutron stars) even have the potential to form pulsar planets.

In the case of a star being disrupted and forming a disk, the disk receives intense radiation from the pulsar that heats and helps evaporate the disk.  If the surface density of a disk is very large, dead zones are formed in the disk where material is able to build up to form planets.  Disks with a lower surface density are not able to effectively shield the disk to prevent its evaporation and therefore cannot form any planets. Only when the companion star is disrupted into a massive enough disk is there a real possibility of a planet then forming.

Only under a very specific set of circumstances can planets form around pulsars.  They require a companion star with a low mass, which only about 10% of neutron star progenitors have.  Of these, only 10% can then survive the supernova explosion.  Of the survivors, some may be evaporated into a planetary mass, while others may be disrupted by the pulsar.  In the case of disruption, the subsequent disk then needs to be dense enough to withstand the intense pulsar radiation long enough to create stars.

Out of the five pulsar planets known, the authors believe that the three planets in the PSR 1257+12 system were formed from the disk of a disrupted star, the planet orbiting PSR J1719-1438 is the core of an evaporated white dwarf, and the planet around PSR B1620-26 was captured along with its white dwarf, with the planet now orbiting both of them as a circumbinary planet.