Typically thought of as stars that didn’t quite make it, brown dwarfs are a class of object without enough mass to undergo hydrogen fusion like other main-sequence stars, but heavy enough to fuse deuterium, differentiating them from their gas giant planet cousins. With faint spectra and complex evolutionary tracks, uncovering the properties of a brown dwarf can be much more challenging than your typical star or planet, particularly if the brown dwarf does not have a companion to help determine its age and mass.

However, ever the classifiers, astronomers often separate brown dwarfs into one of three spectral types, L, T and Y, based on their temperature. The coldest and newest category of brown dwarfs, the Y dwarfs, have so far proven even harder to study. Out of the only 25 known Y dwarfs, only 1, WD0806-661B, has a stellar-mass companion. As companions allow the use of techniques like radial velocities to refine system parameters, this means that the ranks of the coldest brown dwarfs are severely lacking in well-constrained masses and ages.

Meet Ross 19B, the newest discovery of the Backyard Worlds: Planet 9 citizen science project. As its “B” designation suggests, Ross 19B is a companion to the nearby M-type star Ross 19A, and was first identified as a candidate brown dwarf (and labelled CWISE J021903.84+352112.2) by citizen scientists Samuel Goodman, Léopold Gramaize, Austin Rothermich and Hunter Brooks. By searching through sets of images from NASA’s Wide-field Infrared Survey Explorer (WISE) mission, the citizen scientists were able to identify that Ross 19A and the candidate object had similar proper motions, the way in which nearby objects appear to move across the sky with respect to more distant stars which remain comparatively constant, as seen in Figure 1. This kind of co-movement suggests that Ross 19A and the candidate are likely physically associated, and could be binary companions to each other. 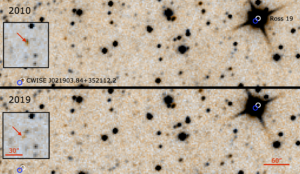 Figure 1: Images from the WISE mission demonstrating the similar proper motion of the M-type star Ross 19A and the candidate brown dwarf, taken in 2010 (top panel) and 2019 (bottom panel). Ross 19A (labelled as Ross 19) is seen in the top right-hand corner of each panel, while the candidate object that would become Ross 19B (labelled as CWISE J021903.84+352112.2) is in the bottom left-hand corner. To highlight the proper motion of each object, the white circles in both panels indicate their positions in 2010, while the blue circles do the same for 2019. In both panels, inserts show a zoom in of the location of Ross 19B, seen as a small brown dot. Figure 1 in the paper.

To confirm that the candidate object was indeed a companion to Ross 19A and not by chance aligned with it, the authors estimated the probability that the two objects are co-moving using the CoMover code. CoMover makes use of the BANYAN Σ software’s ability to determine how well the position, proper motion and parallax of an object match with the galactic coordinates and velocities of nearby groups such as stellar associations. With the new CoMover tool, the authors find a 100% probability that Ross 19A and the candidate are physically associated, and officially designate the new brown dwarf as Ross 19B.

What Makes Ross 19B So Special?

With the available photometry and the known distance to the Ross 19 system, the spectral type of Ross 19B can be found by calculating its J-band magnitude and converting this to a spectral classification.  Ross 19B was found to have a J-band magnitude ~ 19.6, corresponding to the boundary between T and Y dwarfs and a temperature of around 500K. As seen in Figure 2, this makes Ross 19B the coldest known brown dwarf companion within 20pc of the sun, with the exception of the only known Y dwarf companion WD0806-661B. 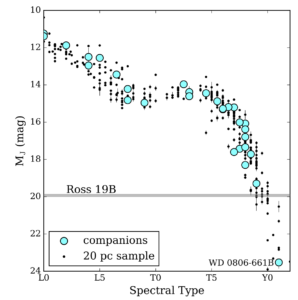 Figure 2: Plot showing the J-band magnitudes and spectral types of brown dwarfs within 20 parsecs of the sun, with cooler objects towards the right and brighter objects towards the top. Brown dwarfs which have companions are highlighted by the blue circles, while brown dwarfs without companions are shown by the black points. The J-band magnitude of Ross 19B and its error bars are shown by the grey region. With a spectral type near the T/Y boundary, Ross 19B is likely the coldest local brown dwarf companion, with the exception of the Y dwarf WD 0806-661B. Adapted from Figure 4 in the paper.

Using Ross 19B’s companion to their advantage, the authors are also able to make estimates about the physical parameters of the system. Ross 19A is a low metallicity star with no signs of activity such as stellar flares, both factors which indicate the star is several billion years old. Using this estimate along with the spectral type of Ross 19B, evolutionary models suggest that Ross 19B could have a mass around 15-40 times that of Jupiter, towards the lower end of typical brown dwarf masses. Meanwhile, at over 11,000 au, the separation of Ross 19A and B makes the system one of the widest found to date!

Given all of these factors, Ross 19B provides a fascinating new case study, helping to expand our understanding of brown dwarfs into colder and wider territories.