Where does a Dragonfly land?

Title: Selection and Characteristics of the Dragonfly Landing Site near Selk Crater, Titan

In 2005, the Huygens probe descended onto Saturn’s moon Titan and gave us our first ever view from a surface in the outer Solar System. Even though it was only designed to last a few hours after landing, this landmark achievement returned valuable datasets explaining various properties of Titan’s atmosphere and surface. This time, NASA is sending a mission to Titan with much more power, instrumentation, and better yet — it can fly!

Dragonfly is a lander but it also leverages Titan’s relatively low gravity and high atmospheric pressure to fly like a drone, scouting new targets and exploring a wide variety of destinations over the course of the mission. This unique ability will allow study of diverse landscapes over an area possibly covering hundreds of miles, investigating pathways for prebiotic chemistry, analyzing habitability (e.g., climate, geological processes), and searching for any biosignatures.

In order to propose this mission to NASA’s highly competitive New Frontiers Program, scientists and engineers performed early studies on where Dragonfly could land and what location would best suit its science goals. Today’s paper explains the basics of the selected landing site and how the team arrived at their chosen location.

Like any lander mission to a planetary surface, safety is the first consideration for narrowing down landing sites. For a mission planning to arrive in the mid-2030s, Titan’s northern hemisphere would be experiencing winter and so pointed away from the Earth and sun. Since Dragonfly relies on a direct line of sight for communication, and NASA requires active tracking during the spacecraft’s entry, descent, and landing phase, this mission can’t be sent to the intriguing methane seas at Titan’s north pole. Instead, dune fields near the equator make for yet another enigmatic target on Titan, where the composition of organic sand and its origin are not yet well understood.

Avoiding the need for additional propellant, the spacecraft will sneak up behind Titan (rather than hitting head-on) and use an aeroshell to slow down in Titan’s thick atmosphere. Coming in at the same 65 degree angle as the Huygens probe, these constraints further narrow down potential landing sites on Titan to a donut-shaped “viable target region” (see Figure 2). From this region, the team was soon drawn to a large impact crater that may provide a variety of interesting terrains for study. 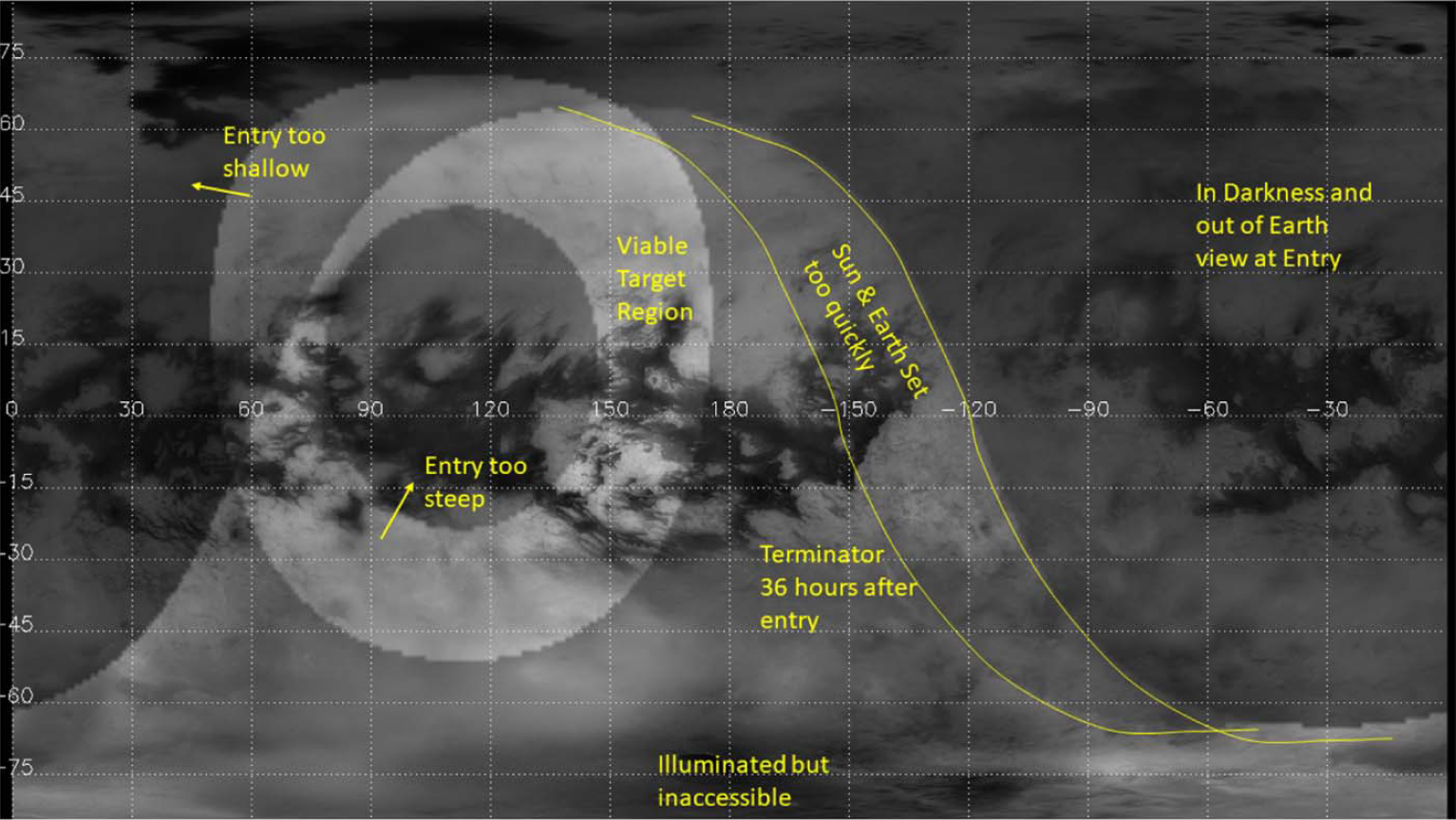 The chosen location on Titan, Selk Crater makes for an interesting study region, in part because of the fascinating chemical reactions possible there. Though Titan is extremely cold and icy, it is wrapped in a haze of organic molecules (long chains of carbon, hydrogen, nitrogen) that have likely built into the basic building blocks of life. Following the extreme heat of an impact, melts of liquid water would have created a fascinating organic soup that may have even been briefly habitable, before freezing back into place. Besides the astrobiological potential, the crater and nearby dunes have obvious geological interest. For example, ongoing erosion has likely degraded the crater rim driven by winds and methane rains.

Despite the sometimes sparse data available for Titan, Selk Crater also has the benefit of having relatively good coverage for mission planning, thanks to several flybys during the Cassini mission. Visible and near-infrared images indicate the chemical composition of the surface based on the brightness of reflections at different wavelengths, but often the highest resolution data for studying morphology comes from radar images (see Figure 3). Some limited topographic data further suggest that the region has relatively minor slopes, rather than steep mountains that could be hazardous to the mission.

To study the region around Selk Crater, the team divided the area into a grid with quarter-degree (~10 km or ~6 mi wide) cells. Making a map for each of the three main datasets, each cell is given a classification, indicating for example whether that cell contains dunes, less certain dunes, ice-rich impact ejecta, or insufficient data, among other classes similar to those used in previous maps. These grid cells could then be used to define mission plans including a specific landing location. Based on simulations of the atmosphere and its winds, the team has defined a 149 by 72 km (93 by 45 mi) landing ellipse south of the crater within which the probe has a 99% chance of landing.

Figure 3: Selk Crater seen in various datasets. Left and center images with black borders are from the near-visible-wavelength ISS (Imaging Science Subsystem, left) and infrared-wavelength VIMS (Visual and Infrared Mapping Spectrometer, center). Zoomed in somewhat closer, the RADAR mosaic (right) also shows the location of two topographic profiles (XY and JK) and the landing ellipse in white, with colors according to the microwave emissivity. Figures 3 and 11 from today’s paper.

In addition to the available data, scientists can also make inferences about the surface conditions by drawing analogies to similar geologic features on Earth (see Figure 4). Landing between dunes, in the “interdune” area can be expected to be flat and safe — so that Dragonfly doesn’t tip over! Since Titan’s dunes can be expected to have the same morphology, there should be wide sections of each dune that are shallow in slope so that Dragonfly can safely take samples of the sand. Ultimately, if things go well among the dunes, the craft will progressively work its way north into the ejecta blanket and Selk’s interior. Terrestrial analogs for Selk similarly give researchers confidence that the interior of the crater can be expected to be relatively flat and hospitable to Dragonfly.

Figure 4: Terrestrial analogs for the landing site on Titan. Linear dunes in Egypt seen from above in radar (top left) and near the ground (bottom left) are likely very similar to those on Titan. The Haughton impact structure in northern Canada (right) is likely similar to Selk and besides the background crater rim has a flat interior. Figures 13 and 14 from today’s paper.

With several years remaining before launch, further changes to the plan might occur, but the team expects that any resulting changes to the chosen ellipse will be relatively minor. Ongoing studies will dig deeper into the Cassini-Huygens data in preparation for this ambitious mission. Although Dragonfly’s launch was delayed to 2027 (with arrival at Titan in 2034), it looks like a visit to Selk Crater will certainly be worth the wait!

Terrestrial analogs: A slice of Mars in your own backyard