How was the universe reionized? Cosmic sunbursts provide hints 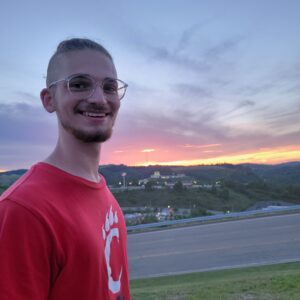 This guest post was written by Riley Owens, a senior undergraduate in physics and astrophysics at the University of Cincinnati. Riley studies the relation between neutral Hydrogen gas distributions and the movement of Lyα radiation. Outside of his research and classes, he is heavily involved in physics mentoring and teaching. In his free time, he’s learning to ride a unicycle!

After the Big Bang, when the universe had cooled enough for protons and electrons to form neutral matter, a poorly understood process called reionization ionized this neutral matter back into its component particles. The radiation suspected of doing this ionization is called the Lyman continuum (LyC), which can be produced by high-energy sources such as hot, massive stars. Understanding sources of LyC and how it travels is critical to solving the problem of reionization.

Young, star-forming galaxies are thought to be the most dominant source of LyC radiation in the context of reionization. However, the same suspect galaxies often contain large amounts of neutral hydrogen, which causes LyC radiation to lessen in intensity as it ionizes the hydrogen and the light is absorbed by a now-free electron. So, identifying where the culprit LyC radiation originates and how it escapes into the larger universe remains a challenging task.

To tackle these problems, astronomers observed an ancient galaxy dubbed the Sunburst Arc, which is an ideal LyC target for a few reasons. First, it’s known to leak LyC radiation. Second, we see it as it was shortly after the end of reionization. Third, the galaxy is strongly gravitationally lensed, meaning its light is magnified and it appears larger in size than it would otherwise. This makes the Sunburst Arc easier to observe and to identify finer details in its structure.

To understand the escape mechanism of the Sunburst Arc’s observed LyC radiation, we need an effective probe of the distribution of its neutral hydrogen. The ultraviolet radiation emitted during the transition from the first excited state to the ground state in hydrogen atoms, called Lyman ɑ (Lyɑ) emission, is an excellent choice. It’s extremely abundant and it can be absorbed and reemitted many times by neutral hydrogen before we observe it. This absorption and remission, called scattering, encodes information about the hydrogen the radiation encountered, which makes it a great tool to learn about the distribution of neutral hydrogen in distant galaxies.

The authors of today’s paper made the first ever observation of a triple-peaked Lyɑ profile, which has a tall central peak flanked by two smaller peaks (Figure 2). So far, this profile has not been observed anywhere else, but it is consistent with the escape method shown in the right panel of Figure 1. The central peak indicates non-scattered emission from the source while the two smaller peaks on either side demonstrate the effects of significant scattering off a surrounding neutral hydrogen medium. The central peak actually shows signs of similar, though lesser absorption on its blueshifted side, suggesting the presence of a neutral fraction of low-velocity hydrogen somewhere between us and the target, likely in the galaxy’s interstellar or circumgalactic gas.

Modeling this triple-peak feature is a very difficult task (see the left panel of Figure 2). However, a crude approximation can simplify this problem by modeling only the central peak and then subtracting it from the observed spectrum. This leaves (mostly) a double-peaked profile which is much easier to fit with other models (see the right panel of Figure 2).

Figure 2: Left: Observed Lyɑ profile of the galaxy (black), overlaid by a best fit model (green). The central peak is radiation directly from the source which escapes through the channels shown in the third panel of Figure 1. The left (blueshifted) and right (redshifted) peaks are radiation which has been scattered by the approaching (blueshifted) and receding (redshifted) sides of an expanding, neutral Hydrogen blanket as shown in Figure 1. Right: Modeling the central peak as a Gaussian feature and subtracting it from the profile leads to a much better best fit model for the two smaller peaks (orange). Image credit: Figure 4 of the paper.

Modeling and best explaining the Sunburst Arc’s unique Lyɑ signature is crucial to mapping its distribution of neutral hydrogen, which, due to its strong lensing, may be possible on very small scales. The Arc’s hydrogen distribution will allow us to understand its relation to the galaxy’s strong LyC leakage and perhaps hypothesize new explanations for the mechanical process which drove reionization. It may be that the neutral hydrogen distribution which permits the LyC escape was more common during an earlier period of the universe than it is at present.

Investigation into the system continues. Further observations to settle how ionizing photons escape the galaxy are part of Cycle 1 of the James Webb Space Telescope’s operations.