Title: The Great Escape: Discovery of a nearby 1700 km/s star ejected from the Milky Way by Sgr A*


While targeting stars in stellar streams, the Southern Stellar Stream Spectroscopic Survey (S5) scientists stumbled upon a serendipitous sighting of a super fast Main Sequence star. That is an alliterative way to say that the authors of today’s paper have found the fastest Main Sequence star yet. There are few mechanisms that can accelerate a star to that velocity, and the authors concluded that this one, named S5-HVS1, must have come from the Galactic Center.

How to “yeet” a star

To come to that conclusion, the authors first ruled out any other explanations for the observed radial (away or toward us) speed of ~1020 km/s. (The average star moves around the galaxy at about 230 km/s.) One way S5-HVS1 could have obtained that speed is if it was quickly orbiting a massive star in a binary system; with different observations, they confirmed over a span of a year that the speed was not varying, which rejected that explanation.

Another possibility is that S5-HVS1 came from a binary system in which one star explodes into a supernova and kicks out its partner. However, that mechanism can’t get stars to the extreme speed that was observed. In the mid-2000s, scientists started discovering these “hyper-velocity stars” (HVS) and turned to a mechanism proposed in 1988 to explain stars moving at 1000 km/s and up. When a binary star system comes too close to a super-massive black hole (like the one at the center of our galaxy, Sgr A*), the black hole can accelerate a star so much that it gets set on a course right out of the galaxy.

Where did you come from, where will you go?

Left Panel: The 90% confidence intervals for the origin of S5-HVS1 based on photometric observations (grey) and added spectroscopic observations (black). The location of our Sun is indicated with a star, since the distance to the Galactic Center is not well constrained. Right Panel: The 90% confidence intervals for different HVS candidates compared to S5-HVS1. (Source: Figure 5 in the paper)

To confirm that this is what happened to S5-HVS1, the authors used the trajectory of the star to trace back where it came from. In the first panel of Figure 1, the black line indicates the origin of the star within a 90% confidence interval. The right panel shows the same confidence intervals for other HVS candidates. The small black mark that indicates S5-HVS1 shows that this is the best candidate to date. 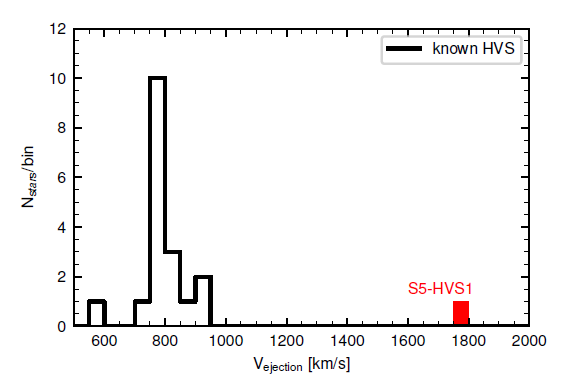 Figure 2: The ejection speed distribution for hyper-velocity stars likely to have come from the galactic center compared to S5-HVS1. (Source: Figure 11 in the paper)

Although the dotted orange line that represents J01020100 looks promising, it only has a velocity of 298 km/s. Figure 2 shows the speed of S5-HVS1 compared to a sample of candidates likely to have been ejected from the Galactic Center. This shows that S5-HVS1 is an unprecedented discovery with both a tightly constrained origin location and high ejection speed. 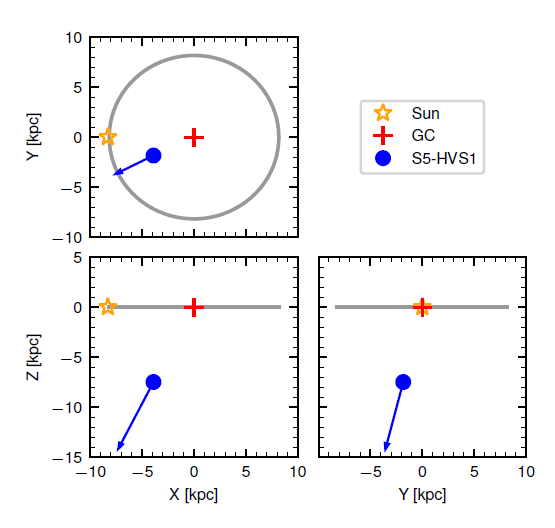 Figure 3: The current direction and velocity of S5-HVS1 assuming a galactic center origin. The length of the arrow indicates how far the star will travel in 4 Myr. The galactic plane is X-Y. (Source: Figure 7 in the paper)

The authors then worked from the assumption that the Galactic Center was the point of origin and were able to constrain other parameters. They determined that the ejection speed was about 1800 km/s, mostly away from the galactic plane. Figure 3 shows that model and our current knowledge of S5-HVS1’s position to indicate where the star will end up in 4 Megayears. By the end of the stars life, it will have traversed about 2 Mpc, which is a large portion of the Local Group (the group of galaxies the Milky Way belongs to).

This has promising implications for the future use of HVS as probes of both the Galactic Center and Local Group. Similar stars may exist that have already been ejected from their galaxies and could be spotted by surveys like the LSST.

Expected improvements to proper motion data from Gaia may constrain the origin of S5-HVS1 even further, allowing scientists to determine the group of stars it used to belong to, or even find its original companion star.

The extreme difference in ejection velocity compared to other HVSs may be explained by the fact that S5-HVS1 has only been recently ejected, compared to the others. If other HVSs are discovered with similar speeds at similar distances, it may indicate that the production of these stars is not constant. S5-HVS1 could have come from a period of high accretion onto the Galactic Center. This would make HVSs a way to study such accretion events in a way we haven’t been able to before.

S5-HVS1 is an exciting discovery because when there’s one, there’s often more. As better measurements become available, stars like it will help us understand even more about the galaxy we call home.