Our Earth is gravitationally bound to the Sun. It would be natural to wonder if there planets that don’t orbit any stars? On such a planet, there would be no day or night, no shadows, and no seasons. As the planet wanders through interstellar space, it would not tug on any stars nor cause any periodic dimming that we can observe. You might think that scientists don’t have a way to detect these free-roaming planets, but in today’s paper, the authors not only find a rich population of new free-floating planets but also probe their origins.

How do you find wandering planets?

Free-floating planets (FFPs) are planets of less than about 13 Jupiter masses that are not bound to a star or brown dwarf. Because their mass is lower than the deuterium burning limit, they do not have a continuous source of energy and gradually cool down. Previously known FFPs were found by gravitational microlensing (also see this astrobite), or in nearby star-forming regions. In the few million years after their formation, these planets are still hot enough to glow. In order to expand the sample size of known FFPs, the authors focus on finding young, glowing FFPs.

The authors of today’s paper use sensitive cameras to directly image the Upper Scorpius (USC) and Ophiuchus (Oph) regions and search for young, glowing FFPs. The Upper Scorpius stellar association is an ideal hunting ground because it is close to the Earth (120–145 pc) and young (1–10 Myr). The authors combined ground-based optical and infrared observations with archival imaging data to produce the Dynamical Analysis of Nearby Clusters (DANCe) catalogue. From here, they used distance, proper motion, photometric brightness and color to select candidate FFPs. Figure 1 shows the distribution of FFPs identified in the survey. The authors found between 70 and 170 new FFP candidates, depending on the age they assume. This is one of the largest and most homogeneous samples of FFPs identified using direct images. 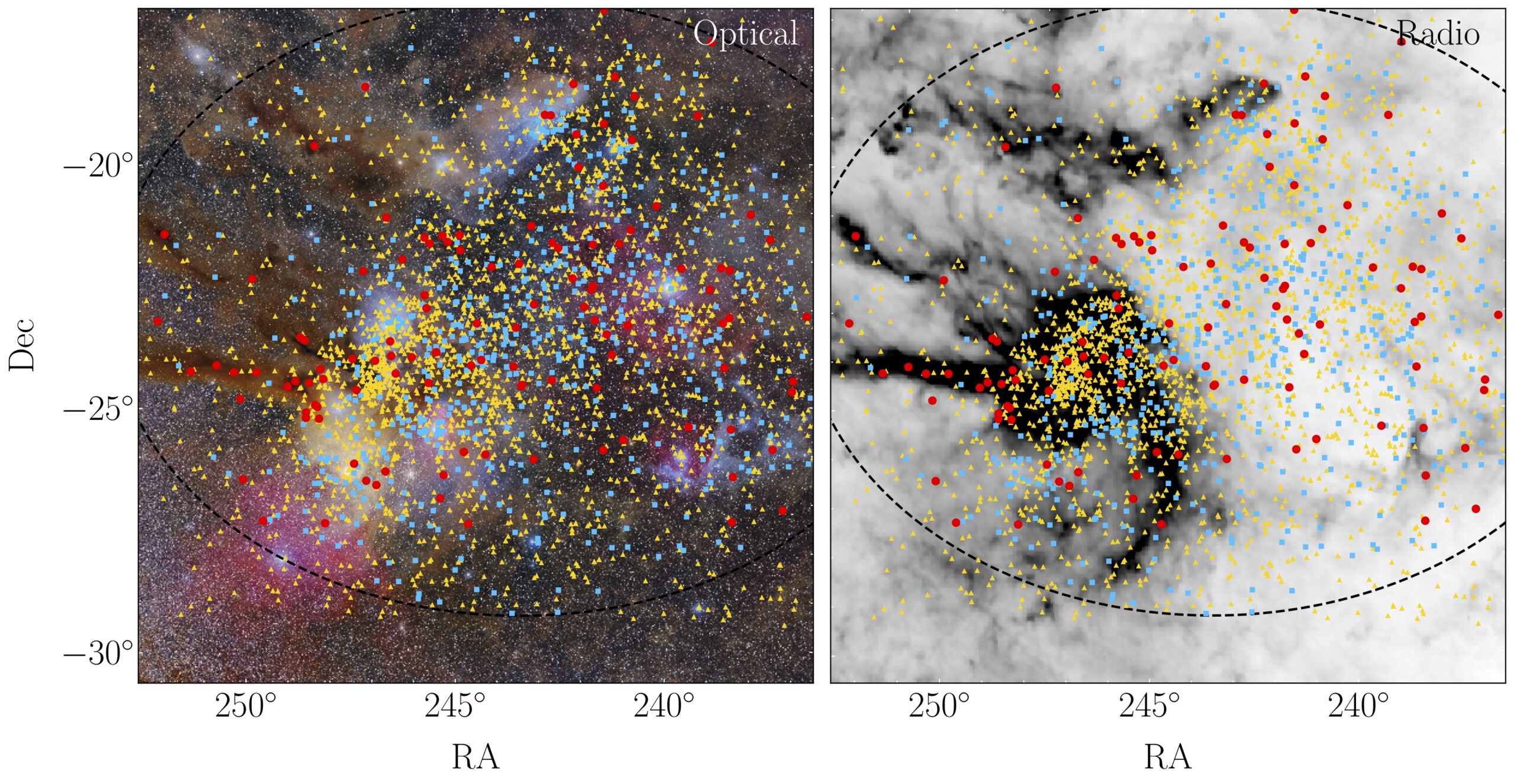 Fig 1: Sky distribution of stars (yellow triangles), brown dwarfs (blue stars) and FFPs (red dots) discovered in this study and classified assuming an age of 5 Myr. The identified sources populate the entire field since they are unbound from stars. Reproduced from Fig 1 of the paper.

What did the new sample tell us?

Now that we have a large sample of FFPs, it is time to analyze it. From this catalogue of FFPs, the authors plotted the luminosity distribution and the mass distribution. Figure 2 shows the number of FFPs in each magnitude bin (top panel) and mass bin (middle panel). The authors chose to plot the J-band magnitude because this band is least affected by the uncertainties and errors in the transformation from luminosity to mass.

Notably, they identify a clear dip at apparent magnitude J ≈ 17.8 mag, corresponding to absolute magnitude MJ ≈ 12 mag and masses of 7–13 MJup depending on the age assumed. This dip is not seen in the mass function in the middle panel. This is likely due to imperfect transformation from luminosity to mass because the precise age of each source is unknown. The bottom panel of Fig 2 compares the observed (red) mass function with the predictions from simulations (black). While they agree at the high mass end, the simulations underestimate the number of FFPs by up to a factor of seven! Why is there such a discrepancy? 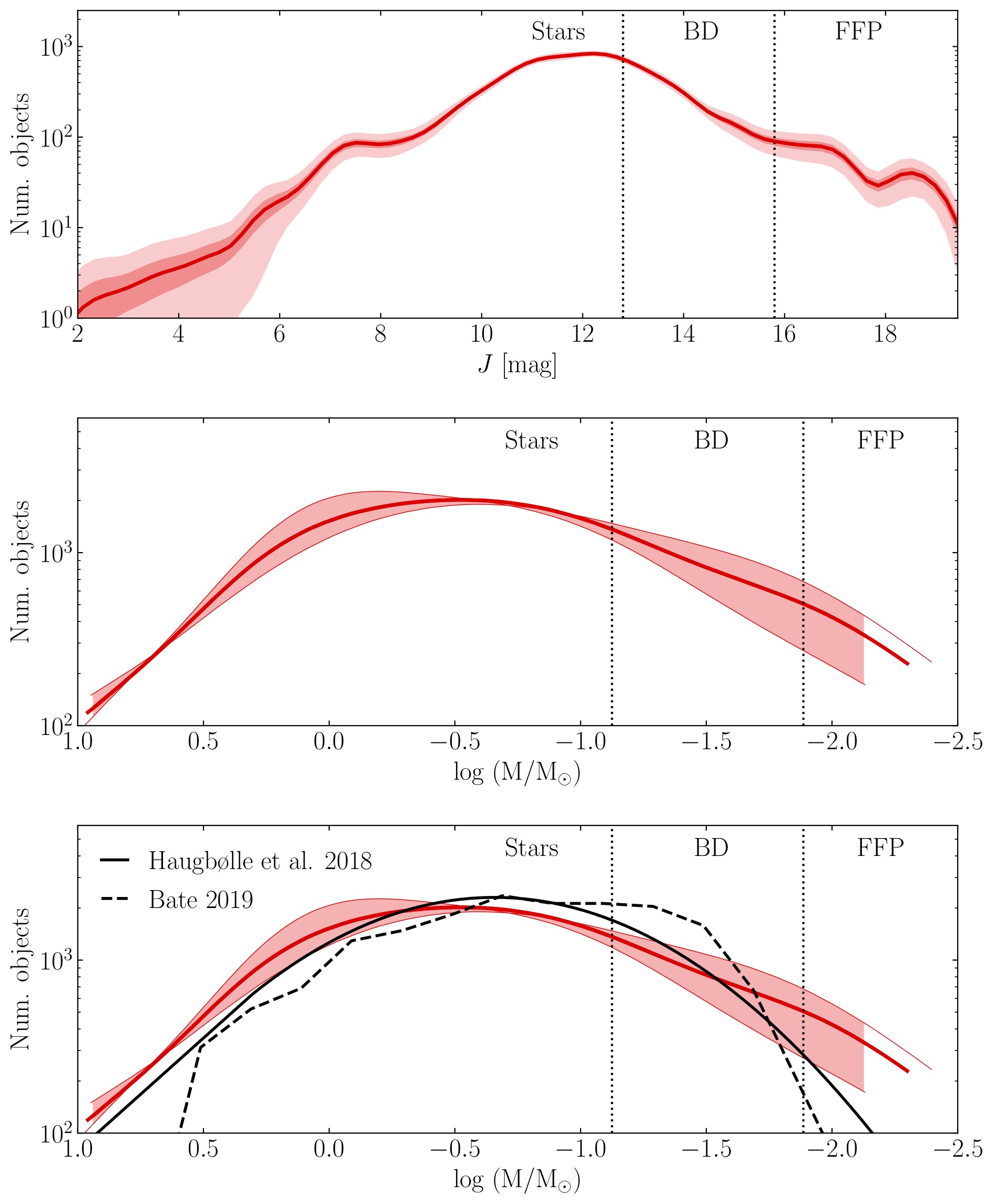 The formation mechanisms of FFPs are still being studied. The main proposed pathways are: (1) core collapse of gas clouds; (2) formation in a protoplanetary disk and then ejection by other planets. Other plausible scenarios include aborted stellar embryos ejected from a stellar nursery and photo-erosion of a prestellar core by stellar winds from a nearby OB star. The relative contribution of each of these mechanisms is still unknown, and that may explain why simulations predict too few FFPs. The authors use this new sample to estimate the fraction of FFPs formed from each pathway. They found that at least 10% must have formed by ejection from a disk. This means that ejection from planetary systems might have a contribution comparable to that of core collapse in the formation of FFPs.

This new sample of FFPs is larger and more comprehensive than previous samples, allowing statistically robust studies of their properties. Are FFPs rare or common? How many are expected to be in the Solar neighbourhood? Now that we have a published FFP candidate catalog, other astronomers can point their telescopes at these interstellar wanderers and obtain new observations to better understand the origin of FFPs.