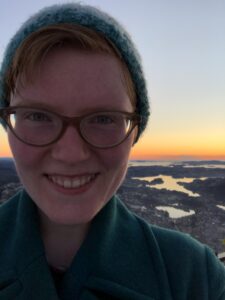 This guest post was written by Katherine Lee, a first-year master’s student in astronomy at the University of Oslo, and graduated with a bachelor’s degree in physics from Montana State University in 2020. Currently, they work on the Cosmic Microwave Background (CMB), where they are helping to develop a better way to separate the CMB signal from the foreground. In their free time, they enjoy knitting, sewing, hiking, and tabletop RPGs.

Galaxies begin their lives with a period of active star formation, which continues until the galaxy runs out of material with which it can form new stars. This transition from a blue, star-forming galaxy to a red, non-star-forming galaxy is called “quenching”, and is a normal part of a galaxy’s lifespan. It appears, however, that more galaxies in the local universe are quenched than would be expected if their evolution was uninfluenced by outside factors.

This effect is an active area of research, and most researchers agree that a combination of multiple factors is driving the observed high number of quenched galaxies. There are several possible explanations, including strong radiation due to the galaxy’s central supermassive black hole (SMBH), as well as interference from galaxy collisions. These collisions can be further subdivided into “major” and “minor” mergers, where a major merger is a collision between two galaxies of similar size, and a minor merger involves one galaxy much larger than the other.

Although previous work had investigated quenching involving major mergers, minor mergers had not yet been given the same consideration. Today’s authors use simulations to focus on quenching caused by minor mergers, in an attempt to understand how these events may cause galaxies to become “red and dead”.

The authors used the ChaNGa (Charm N-body GrAvity) solver to study four simulations of a large, Milky Way-like galaxy and two smaller satellite galaxies. For each of the four configurations, they varied the mass of the two smaller galaxies very slightly, causing the satellite galaxies to collide with the main galaxy at different times in each simulation. Two of the galaxies were quenched at the end of the simulation time, while two were still actively forming stars. The merger history of a quenched vs. star-forming galaxy in these simulations is shown in Figure 1. 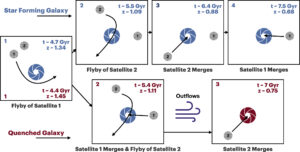 Figure 1: Differences between the interaction histories of a quenched galaxy and one that remains star-forming. Both simulations start with a flyby of the first satellite. Afterward, the order of their interactions diverge. In the non-quenched case, the satellite mergers happen over a longer time scale, allowing the galaxies to maintain star formation. In contrast, the more rapid mergers seen in the bottom row disrupt the galaxies, causing their central black holes to activate. This ejects a large amount of gas from the system, quenching the galaxies. (Fig. 3 of the paper)

Additionally, the authors used Romulus25 to simulate a larger collection of 26 galaxies with masses similar to that of the Milky Way, as well as associated satellites. They used this simulation to constrain the likelihood of the double minor merger scenario described by the rest of the paper.

Why does this kill the galaxy?

The differences between the merger scenarios for the two star-forming galaxies and the two quenched galaxies were minimal. The only thing that varied between the two cases was the relative timing of the minor merger events, which means that the observed quenching was caused by the specific sequence of satellite interactions.

To explain how this works, the authors note that the satellite interactions in the quenched case are timed in a way that destabilizes the galaxies’ disks. When the first satellite merges, it feeds the galaxies’ central supermassive black holes, and both this merger and the simultaneous flyby of the second satellite cause the destabilization. The sudden influx of hot material swirling around the SMBH generates a large amount of energy and radiation. This ejects gas from the destabilized disk and stops the remaining gas from being able to form stars, even after the second satellite finally merges 1.6 billion years later. The galaxy was quenched for the remainder of the simulation time, another 7 billion years.

Of the 26 galaxies in the Romulus25 simulations, one underwent a very similar sequence of events: a simultaneous minor merger and satellite interaction, followed by a burst of black hole activity that quenched the galaxy. This method of quenching is therefore fairly plausible, and is one possible mechanism contributing to the lack of star-forming galaxies in our galactic neighborhood.