Which habitable zone planets are the best candidates for detecting life?

Status: Accepted for publication in the Astrophysical Journal (open access)

With over 4,000 exoplanets discovered (roughly 30 of which are expected to be habitable) how can astronomers prioritize which to study in the search for extraterrestrial life? Today’s paper explores the “continuous habitable zone”, or planetary orbits which can host liquid water long enough for detectable life to develop.

With JWST beginning observations and HabEx/LUVOIR on the horizon, transit spectroscopy from space is set to dramatically increase our ability to characterize exoplanet atmospheres. Astronomers are working to prioritize which potentially habitable exoplanets are the best to search for life on. The Habitable Zone (HZ) defines the region surrounding a star in which a planet could host liquid water, which is typically assumed to be a requirement for life. Stars evolve, though, and planets that are habitable at one point in time may not always be or have been.

Life takes time to develop and become detectable. Let’s consider Earth’s history as a benchmark. The Great Oxidation Event, during which biologically-produced molecular oxygen accumulated in Earth’s atmosphere, occurred roughly 2 billions years (Gyr) after Earth’s formation. This is adopted as the length of time needed for life to make a detectable impact on a planet’s atmosphere. Today’s paper presents a method to estimate the likelihood that a planet has resided in its star’s HZ for at least 2 Gyr, defining the region where this could occur as the 2 Gyr Continuous Habitable Zone (CHZ2).

So, how do we determine the HZ of a star? The paper discussed two frameworks: 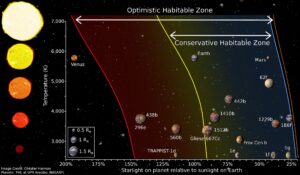 Using Bayesian statistics, the authors created an equation for the probability of a planet residing in the CHZ2, as a function of its host star’s mass, metallicity, and age. They assigned ages to the host stars, based on evolutionary tracks from the Tycho stellar modeling code, finding that their estimates aligned well with previous measurements based on gyrochronology.

The authors used their framework to evaluate 9 potentially habitable exoplanets, as well as Venus, Earth, and Mars. All stars considered were relatively Sun-like (between 0.5-1.1 solar masses), with terrestrial planets like Earth and super-Earths (radii < 1.8x Earth’s and mass < 10x Earth’s). Figure 2 shows the results for the solar system and their best exoplanet candidate.

What this means for the future

The authors conclude with proposals for future work on this topic, including extending the analysis to lower-mass stars. They also estimated ages for nearly 3,000 TESS continuous viewing zone stars, which are the best candidates for TESS to find HZ planets around, to apply a similar framework to in the future. The exoplanets determined here to have a high CHZ2 probability will be ideal for follow-up with JWST. The method will also be valuable in target selection for future exoplanet characterization missions like HabEx and LUVOIR.

As shown in Figure 2 above, the method used in this paper determined Mars to be in the CHZ2, while we know it not to be currently habitable. This indicates the need for additional model parameters in the Bayesian analysis to improve accuracy. This includes further stellar and planetary properties important to their evolution, including stellar oxygen-to-iron ratios, planetary composition, and stellar activity.