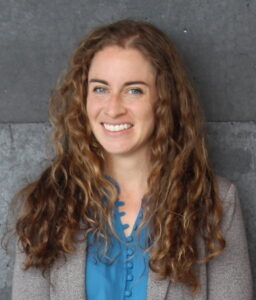 In this series of posts, we sit down with a few of the plenary speakers of the 240th AAS meeting to learn more about them and their research. You can see a full schedule of their talks here, and read our other interviews here!

When Dr. Laura Kreidberg entered college in 2007, she didn’t know you could get a real job doing astronomy. Now, she has a real job in a position that didn’t even exist until two years ago: Director of the brand-new Department of Atmospheric Physics of Exoplanets at the Max Planck Institute for Astronomy in Heidelberg (MPIA). Kreidberg is one of three directors at MPIA, which for a long time only had a Department of Planet and Star Formation and a Department of Galaxies and Cosmology. Kreidberg is also a keynote speaker at the 240th AAS meeting as the 2021 winner of the Annie Jump Cannon Award for “outstanding research and promise for future research by a postdoctoral woman researcher.” She won the award for “her pioneering research on the structure, composition, and dynamics of exoplanet atmospheres.”

Kreidberg always liked astronomy, but what really drew her into astronomy research was her passion for statistics. At a time when she felt discouraged by her undergraduate physics courses, American statistician Nate Silver was helping to popularize statistical modeling for forecasting the 2008 US presidential election. With some advice from her advisor, Kreidberg soon realized that she could use the same types of statistical tools in astronomy. She first had the opportunity to try out that idea in her undergraduate research project on stellar-mass black holes. Although she ended up switching research fields in graduate school, that project was a major reason she decided to become an astronomer. The clear need for statistical models in observational studies of exoplanet atmospheres was what sparked her interest in her new field as well.

Exoplanet atmospheres became an exciting research field this past decade as the Hubble (optical and near-infrared) and Spitzer (infrared) space telescopes led the way for detecting a few types of atoms and molecules in atmospheres, most notably water. Kreidberg pointed out that water is easy to make and much more common in planetary atmospheres than you might think, but that doesn’t make it much easier to detect. Kreidberg in particular was responsible for unambiguously detecting water on two hot Jupiters: WASP-43b and WASP-12b, the latter of which we covered here on Astrobites. She also definitively detected clouds on super-Earth GJ 1214b and demonstrated that the much hotter super-Earth LHS 3844b — at over 1000 K — did not have an atmosphere at all, another result you can read about on Astrobites. Kreidberg was so excited about testing out her data analysis technique for LHS 3844b that she even called the Spitzer team in advance to find out when they would finish processing the data.

With the launch of JWST this past Christmas and the construction of the world’s largest optical and infrared telescopes (including the 39-meter Extremely Large Telescope in Chile) scheduled to be completed before 2030, our knowledge of exoplanet atmospheres should only keep growing in the decade to come. Building on Hubble and Spitzer, we can expect many new developments in the science of exoplanet atmospheres from JWST’s longer infrared observations, such as:

Kreidberg’s two initial JWST programs both focus on rocky planets. The first program will try to see if the famous TRAPPIST-1c has an atmosphere by looking for signs of atmospheric circulation. If TRAPPIST-1c does have an atmosphere, circulation should keep the dayside and nightside temperatures fairly similar. Otherwise, the day and night temperatures could be wildly different, just like Kreidberg found for LHS 3844b. The second program is not actually on atmospheres, but will instead try to detect spectral signatures from the surface of the atmosphere-less LHS 3844b, with the hope of being able to distinguish between the surface being made of granite or something else like basalt.

As a new director at MPIA, Kreidberg’s role is to set up a bunch of research groups, one of which is her own. She pointed out one of the challenges of being a director is that there are no right answers, and that aspect is not so different from research itself. When you are a more junior person, she says, you might imagine that the “grown-ups somehow know all these really tough things like what is the most exciting research direction or what is the most exciting new instrument to build, but nobody knows that. It’s just a constant series of judgment calls.”

For undergrads interested in getting into research on exoplanet atmospheres, Kreidberg recommends learning statistics (of course!) and how to code with Python, two things you will definitely need to disentangle those minute atmospheric signals from “messy” exoplanet spectra. Kreidberg’s advice for undergraduates attending the AAS meeting is to meet your peer group; they’re going to be your future colleagues and the people you run into at other conferences going forward. And also, have fun!

Kreidberg noted that there has been a lot of progress for the numbers of women and non-binary astronomers in the field at all levels since she started out. But even more importantly, there has been increasing awareness that issues related to a lack of equal representation are not just women’s issues, but issues for everyone to be concerned with and to address. She is also happy to see that other minoritized groups that have faced more challenges are starting to get much more attention; while we are still far from more equal representation, the direction has continued to be positive going forward.

To hear more from Dr. Kreidberg, be sure to check out her AAS 240 plenary talk on Wednesday June 15th at 3:40pm PT.