The Carina Nebula is a large (the largest!) diffuse nebula in the southern sky and is only ~8.500 light years away. It hosts a number of star-forming regions and bright stars, including the most luminous star in our galaxy, WR 25. Most famously, this nebula is known to host the Eta Carinae star system.  Due to its size and close location to Earth, Eta Car is the most massive star that we are able to study in great detail.  There are a number of other features in this nebula that are interesting, such as the Keyhole Nebula, a variety of open star clusters, and dust-gas pillars.  The Keyhole Nebula is an opaque molecular and dust cloud in the shape of a keyhole.  Nebulae such as this that are opaque to visible light are called “Dark Nebulae.” 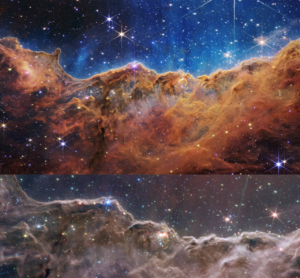 WASP-96b is a hot Jupiter residing about 1,150 light years from Earth. It is about half the mass of Jupiter, but it is so hot that it has inflated to 1.2 times Jupiter’s radius. The planet orbits its Sun-like host star every ~3.5 days. WASP-96b was first discovered in 2014 by the Wide Angle Search for Planets (WASP) via the transit method. As a highly inflated planet with an extended atmosphere, WASP-96b is a great candidate for atmospheric characterization. Astronomers use transmission spectroscopy to measure the transit depth of an exoplanet passing in front of its star at different wavelengths, in order to study the contents of the planet’s atmosphere.

Prior transmission spectroscopy of this planet with the Very Large Telescope measured a precise sodium abundance, finding an absorption feature consistent with clear, cloud-free skies. Further study may reveal additional abundances in the atmosphere, as well as metallicity. Understanding the composition of gas giant planets is an important step in determining how they form and evolve. JWST’s transmission spectroscopy will allow for deeper study of this and other planets’ atmosphere than ever before. 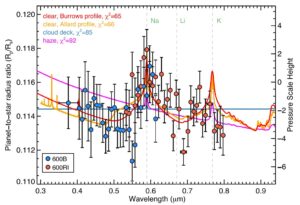 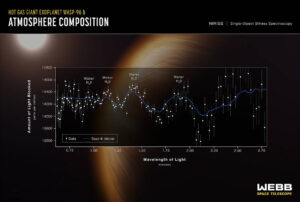 The Southern Ring Nebula (also known as NGC 3132, the Eight-Burst Nebula, and Caldwell 74) is a planetary nebula about 2,000 light years from Earth. It was discovered by John Herschel in 1835 and has been studied extensively since. Planetary Nebulae aren’t actually related to planets; they form from the outer layers of stars that get shed at the end of their lives, leaving behind a white dwarf. The name stems from early observations of such objects, where astronomers noted their round, planet-like shape and apparent size on the sky.  At the center of the Southern Ring Nebula lies a binary star system, one member of which is the remnant white dwarf and the other, a less evolved star. JWST will measure atomic and molecular abundances in the ejected gas and the temperature structure of the region. 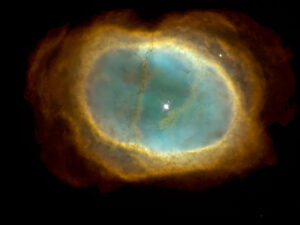 JWST images of the Southern Ring Nebula. Left: NIRCam. Right: MIRI. The MIRI image reveals the second star in the binary system for the first time! This second star is the remnant white dwarf, shrouded in dust, which ejected all the hot gas making up the planetary nebula, and the brighter star is in an earlier stage of stellar evolution. We can also see some galaxies in the background of the nebula! (Image credit: NASA, ESA, CSA, and STScI)

Stephan’s Quintet is a group of five (5) galaxies found in the constellation of Pegasus by Edouard M. Stephan in 1877.  This was also the first compact galaxy group ever discovered!  Starting on the top left (in the image below), this white/blue/purple galaxy, NGC 7320, is actually about 7 times closer to Earth than the other 4 galaxies!  Continuing clockwise, NGC 7319 is a barred spiral galaxy with blue and red star clusters.  In this image, blue represents optical light at 438 nm, and red represents a mixture of optical light at 657 nm (commonly called “H alpha”), and infrared light at 814 nm and 1.4 micrometers (I-band and near-IR, respectively).  Continuing around the image, the interacting galaxy pair of NGC 7318A and NGC 7318B is surrounded by blue and pink star clusters.  Finally, the elliptical galaxy on the bottom left is known as NGC 7317. 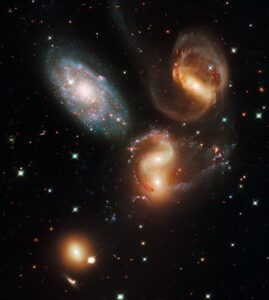 “Galactic wreckage in Stephan’s Quintet” This image of the quintet was taken with the Wide Field Camera 3 on HST and was released in 2009. It is made up of optical and infrared imaging. (Image credit: NASA, ESA and the Hubble SM4 ERO Team)

In addition to the full Deep Field image released yesterday, today spectra of some of the galaxies in the image were revealed. See our previous bite for more about Deep Fields!

I am a fourth year graduate student at Penn State University studying Astronomy & Astrophysics. My current work focuses on technosignatures, also referred to as the Search for Extraterrestrial Intelligence (SETI). I am generally interested in exoplanet and exoplanet-adjacent research. In the past, I have performed research on planetary microlensing and low-mass star and brown dwarf formation.