The First Exoplanet Discovery (Around a Very Non-Sunlike Star)

Title: A planetary system around the millisecond pulsar PSR1257+12

The number of discovered exoplanets reached an amazing milestone of 5,000 recently, but it was only 30 years ago that the first discovery was made. The 2019 Nobel Prize in Physics was awarded in part to Michel Mayor and Didier Queloz for the 1995 discovery of the first known exoplanet around a Sun-like star. But, in 1992, Aleksander Wolszczan and Dale Frail discovered a pair of planets around a star very unlike the Sun: a pulsar.

This first exoplanet system was discovered using an interesting technique: Pulsar Timing. Pulsars are rapidly rotating neutron stars that may periodically emit intense beams of radiation toward Earth with very regular and precise timing. When a planet is in orbit with a star, the star also orbits the system’s center of mass. This “wobble” can cause periodic variations in the timing between observed pulses. This orbital motion is also exploited in the radial velocity exoplanet detection method.

Animation of a pulsar. As the star spins, its beam periodically points toward Earth, creating measurable radio pulses. The observed timing of this pulse can change when a companion perturbs the pulsar’s motion. (Image credit: Michael Kramer, JBCA, U. Manchester)

PSR1257+12 (also named Lich, by the International Astronomical Union) is a millisecond pulsar, a rapidly rotating neutron star with a period of just 6.2 milliseconds! The authors measured the arrival time of 4,040 pulses from the star, noting a slight periodic variation in the arrival times. They found that this variation aligned with a combination of 2 periods: 66.6 and 98.2 days. The authors were able to rule out the typical causes for pulsar period variations: neutron star seismology, eclipsing binary pulsars, spin axis precession, and magnetospheric phenomena. Only one plausible explanation remained: the pulsar has two low-mass companions perturbing its orbital motion.

The authors also found possible evidence for a third planet on a roughly year-long orbit but could not confirm it at the time. The two discovered planets are on orbits similar to Mercury’s and have estimated masses of a few times Earth’s.

Millisecond pulsars, like PSR1257+12, are thought to form when a neutron star accretes matter from a binary stellar companion. It seems unlikely that a planet in such a system would survive, so the authors propose that the planets are “second generation” planets which formed in the neutron star’s accretion disk.

The prospect of planets being able to form and exist around neutron stars and other extreme environments has made the search for exoplanets a lot more interesting! The field is not limited to living stars; it extends even to dead and undead stars which should have destroyed everything around them. 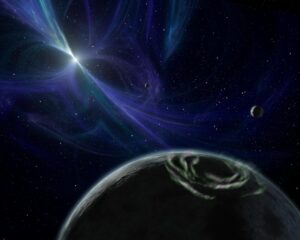 Artist’s depiction of PSR B1257+12 and its planets. (Image credit: NASA/JPL-Caltech)

As of November, 2022, the NASA Exoplanet archive documents 7 confirmed planets (including these first two) discovered via pulsar timing variations, out of 5,190 total confirmed exoplanets. Pulsar planets are rare, presumably because of the incredibly harsh environments created by the stellar evolution processes that result in pulsars.

So, how did these rare planets end up where they did? The PSR B1257+12 planets likely formed from the debris disk left behind by a merging companion white dwarf. Another pulsar planet, PSR J1719-1438b, is thought to be a remnant (diamond!) core of a white dwarf companion whose outer layers were ripped away by the pulsar. One pulsar planet, PSR B1620-26b, is actually circumbinary, orbiting a binary pulsar-white dwarf system. The planet is theorized to have originally formed around the white dwarf’s main sequence progenitor before being captured by the pulsar.

A circumstellar disk was discovered around pulsar 4U 0142+61, which is also a highly magnetized neutron star, or magnetar. This demonstrates that the material left behind from supernovae may allow companionless pulsars to form new planets! 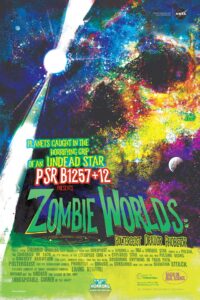 NASA “Galaxy of Horrors” poster of PSR B1257+12 and its planets. (image credit: NASA-JPL/Caltech)

Ultimately, pulsar planets are rare, but as radio telescope resolution and sensitivity improve, we may find more of these disks, as well as pulsar timing variation planets. What terrifying worlds will we find next? And might they even be habitable?