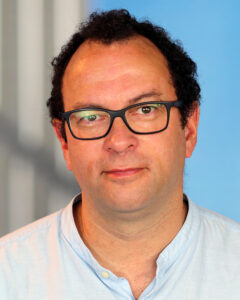 In this series of posts, we sit down with a few of the keynote speakers of the 241st AAS meeting to learn more about them and their research. You can see a full schedule of their talks here, and read our other interviews here!

Think of a research area in astronomy! Chances are it has been revolutionized by ESA’s Gaia spacecraft mission. The solar system? Stars? Exoplanets? The Milky Way? Other galaxies? Supernovae? Cosmology? Of course! That’s what happens when the core objective of your mission is to measure distances to astronomical objects, a cornerstone of pretty much all of astronomy.

Since 2013, Gaia has been using a star’s parallax to measure the highest-precision distances to date of over a billion stars in our galaxy. It also determines the positions of these stars, how fast they are moving, and their luminosities. The stars Gaia observes are spread out across the Milky Way, and it can also make the same measurements for closer objects in our solar system or even distant quasars located as far away as redshift z ~ 5! With that kind of data, Gaia can

Check out this Astrobite for a more in-depth summary! With such a wide array of accolades, it is no surprise that the Gaia team was awarded the Lancelot M. Berkeley − New York Community Trust Prize, in particular for “for enabling a transformative, multidimensional map of the Milky Way”! Giving a lecture on behalf of the team is Anthony Brown, an associate professor at Leiden University in the Netherlands.

Brown’s work might not be what you would expect if your idea of an astronomy professor is someone whose primary science role is to do research. For the past decade since 2012, Brown has served as the Chair of the Data Processing and Analysis Consortium for the Gaia collaboration. The consortium comprises nine separate teams across Europe that each focus on a different aspect of processing the Gaia data (such as photometry, spectroscopy, or simulations). Brown’s primary job as chair is to manage these teams. Each month, he organizes meetings with the leaders of each team to keep everyone up-to-date on what the other teams are doing, to make sure the data processing is effective, and keep the teams on schedule, among other things.

Long before becoming a chair for Gaia, Brown did his PhD research on OB associations (groups of stars with at least 10 very massive O or B stars, more than usual!), working with photometry data (i.e. measuring luminosities). He finally got to use the data from Hipparcos, the predecessor to Gaia, right after his PhD once they released the data catalog in 1997. That was when he had just started his first postdoc position with Michael Perryman, the ESA project scientist for Hipparcos. Also around that time, ESA was making a study for the concept of the Gaia mission and Brown was asked to work on the scientific justification part of the proposal. He began taking on more of a leadership role in 2000 when ESA was formally preparing the mission and then, in 2006, became an official co-leader of the photometry team, one of those nine teams he serves as chair over today.

Beyond his role as chair, Brown also has his own research group in which he mainly supervises undergraduates and Masters students. At Leiden, undergraduates in astronomy need to do a three-month research project that culminates in a presentation and a thesis. It is common for them to work in pairs on a project because Leiden has so many undergraduates. A typical project requires students to use Python to analyze the Gaia data, and it might also involve statistics or machine learning. Working with Gaia data, the topics can vary a lot! Brown strives to make sure students learn something from their projects and get a finished product out of it.

Brown notes that while the first things that come to mind about Gaia are usually parallaxes, distances, proper motions, and luminosities, the mission data also encompasses other things such as spectra and chemical abundances. A key takeaway of his AAS talk is to appreciate how Gaia connects to so many different fields of astronomy, even if it might be a bit difficult for younger students to follow all of its applications. Even Brown himself has been surprised by how others have managed to use the Gaia data. One of his favorite scientific results was how a group at Warwick found the first observational evidence that white dwarfs crystallize as they cool down over time, evidence they produced by analyzing the Gaia data for the white dwarf part of the HR diagram. Within Brown’s own research group, one of his favorite projects was done by his most recent PhD student Eleonora Zari, who mapped and categorized the distribution of young stars in the solar neighborhood using an improved methodology enabled by Gaia.

As someone who currently works as more of a project manager than a researcher, Brown is wary of how astronomy largely only has a singular career path of doing research and publishing papers to try to one day get a permanent position. He hopes that astronomy becomes more open-minded and supportive of students trying to more directly pursue astronomy positions related to software development, data processing, or running a survey rather than research. He also points out that those kinds of positions are definitely needed by other astronomers and worth pursuing, and could possibly be a good fit for students still interested in astronomy who at some point decide not to pursue a research career. Another broader piece of advice Brown had was don’t be afraid to ask for more mentorship, even when trying to be an independent researcher. Brown wished he had done that during his second and third postdoc positions that weren’t so productive, and he thought he could have been more focused if he just asked for more help!

To hear more from Dr. Brown and about Gaia, be sure to check out his AAS 241 Berkeley Prize plenary talk “The Gaia mission: teamwork for a billion stars” on Thursday, January 12th at 4:40 PM PT.