In everyday life, measuring distances is easy. In astronomy, however, accurate distance measurements are challenging to obtain because of the degeneracies between luminosity (absolute brightness) and distance. Imagine that star A and star B are both blue in color but that star B is four times as bright as star A. If star B is located twice as far away as star A, then both stars will appear equally bright to an observer on Earth. (Recall that the flux received by an observer falls off with the square root of the distance, so that star B needs to be four times brighter than star A to appear equally bright if it is twice as far away.)

To make matters even more complicated, while the absolute magnitude of a star scales roughly with stellar mass, a variety of other stellar parameters can also affect absolute magnitude. This means that estimating the brightnesses and distances to stars is much more confusing than estimating the distance to the next corner based on the brightness of the stoplight. Given the difficulties involved in deriving accurate distances and absolute magnitudes, you might wonder why astronomers bother to calculate them. It turns out that the effort is well worth the trouble. Knowing the distances and velocities of stars allows astronomers to map out the distribution of stars in the galaxy and search for clues to the galaxy’s past evolution.

In this paper, Bochanski et al. select a set of M dwarfs (very low mass main sequence stars) from the seventh data release of the Sloan Digital Sky Survey (SDSS) to investigate trends in absolute magnitude with magnetic activity and metallicity. Using the advanced distance measurement technique of statistical parallax analysis, they compute the absolute magnitudes, positions, and velocities of the M dwarfs in their sample along with the Sun’s motion through space. In an upcoming post, I’ll provide an overview of various astronomical distance measurements including statistical parallax.

In their analysis, they discovered that high metallicity M dwarfs appear brighter than low metallicity M dwarfs and that magnetically active M dwarfs appear brighter than magnetically inactive M dwarfs. Metallicity is measure of how metal rich a star is (remember that astronomers call anything heavier than helium a metal), and saying that a star is “magnetically active” means that it has a strong magnetic field that is prone to flaring and violent eruptions. Solar flares and coronal mass ejections (CMEs) on the Sun are good examples of magnetic activity. Check out the Solar and Heliospheric Observatory (SOHO) website for some awesome footage of erupting CMEs. 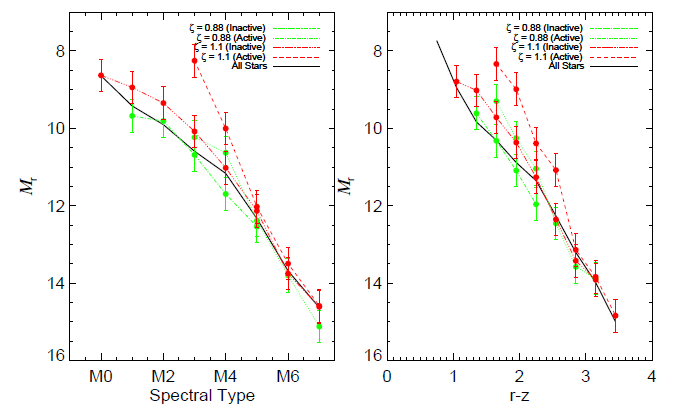 Absolute Magnitude versus spectral type (left panel) and r-z color (right panel) for the M dwarfs in the sample. The black lines show the absolute magnitudes of the full sample, while the green points represent low metallicity M dwarfs and the red points represent high metallicity M dwarfs. The active and inactive stars in both groups are plotted separately as indicated in the legend. From Figure 3 of Bochanski et al. 2011.

In addition to reporting trends in absolute magnitude with increasing metallicity and activity, Bochanski et al. also argue that stellar colors are a better estimator of absolute magnitudes than spectral types. This means that photometric surveys like the Panoramic Survey Telescope & Rapid Response System (PanSTARRS) and the Large Synoptic Survey Telescope (LSST) will be able to provide better distance estimates for low-mass stars, assuming that astronomers can find an accurate way to determine metallicity and activity from photometry. Researchers have already begun to explore this issue, so look out for a future astrobites post about photometrically-derived metallicity and activity estimates!