Fundamental to the field of cosmology is the question, “How did the structure that we see in the Universe come to be?”  The commonly accepted answer to this question, at least for galaxy formation, is the hierarchical structure formation model, which says that galaxies are built up through a series of mergers with other galaxies. (This may seem obvious, but for a long time many astronomers were proponents of an opposing theory, known as “top-down structure formation“.)  As mentioned in a number of previous astrobites, most massive galaxies are expected to host a supermassive black hole (SMBH) at their center.  Thus, hierarchical structure formation predicts that in addition to galaxy mergers, there should be many systems of merging SMBHs in the Universe.  In this paper, the authors describe the discovery of a triple system of SMBHs, and go on to derive several properties of the system, as well as an estimate of how many such systems there are.

Detections of merging SMBH systems are made primarily through searches for active galactic nuclei (AGN), because SMBHs are easiest to find (in optical searches) by looking for the characteristic emission lines that arise when they are accreting gas.  In some cases, a third galaxy may join a merging pair on timescales short enough that the first interacting pair of SMBHs may not have coalesced, giving rise to a system of three gravitationally interacting SMBHs.  Such systems have been suggested as the cause of certain trends noted in large galaxies, such as the large cores of some massive ellipticals (see e.g. Hoffman & Loeb, 2007).  In addition, a triple system of SMBH would be a useful dynamic snapshot for investigating three-body interactions in General Relativity – a problem that cannot be solved analytically.  However, there is currently little observation evidence for systems of gravitationally interacting SMBH, because their separations are on the order of parsecs, far too small to be resolved with current instruments on cosmic scales.  Therefore, the authors of this paper are conducting a survey to investigate the next best thing: kpc-scale merging systems, which are the precursors to gravitationally interacting SMBH systems.

To conduct their search for AGN mergers, the authors use data from the Sloan Digital Sky Survey (SDSS).  After selecting a sample of 92 AGN pairs with separations less than 10 kpc, the authors found 7 systems with a third nucleus candidate less than 10 kpc from the first two.  In order to determine whether these systems contain three AGN, they conducted optical slit spectroscopy of all three nuclei.  Of the 7 candidates they find one system, SDSS J1027+1749, that appears to clearly contain three AGN.  The optical image of the system is shown in the figure below. 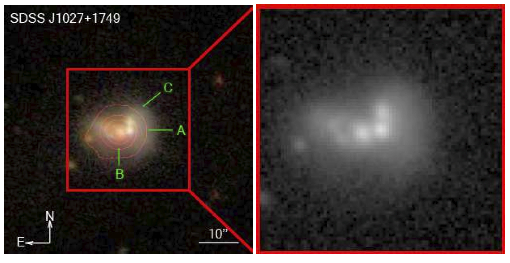 The SDSS gri-color composite image of SDSS J1027+1749. Clearly visible are the three galaxy nuclei, labeled A, B, and C.

The authors then used the spectra of each nucleus in SDSS J1027+1749 (shown in the figure below) to determine several important features of the system.  By fitting a galaxy template to the continuum (the first line of data in the figure below), they determined the redshift of the stellar component of each nucleus, which gives the projected separation of the AGN.  These were all less than 3.0 kpc.  The authors then subtract the continuum fit from the total spectrum, which leaves emission lines (the second line of data in the figure).  Measuring the ratios of these lines shows that each nucleus is most likely an AGN (as opposed to a star-forming galaxy, for example).  In addition, the authors use the velocity dispersions of the stars in the stellar component to compute the stellar mass and black hole mass of each nucleus.  The velocity dispersions are computed by measuring the width of the absorption lines in the continuum fit. 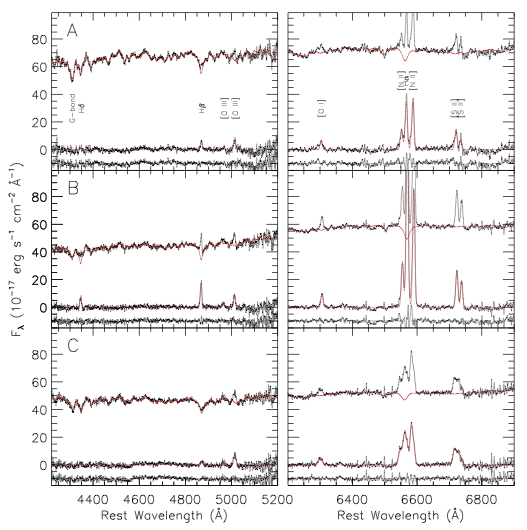 Using dynamical friction timescale estimates, the authors conclude that the stellar components of the three nuclei in the system will merge in ~ 40 Myr, while the three SMBHs will inspiral and could become a gravitationally interacting triple in ~ 200 Myr.  In addition, the authors use this result to calculate a lower limit for the frequency of kpc-scale triples in optically selected AGNs at a redshift of z ~ 0.1, which is

Although it is based on only one system, this result is important because of its power to inform cosmologists about the rates and timescales of SMBH mergers, which can then be applied to cosmological models of structure formation.