We want to find small, rocky planets that are capable of supporting life; ‘Earth-like’ exoplanets. Unfortunately, the less massive a planet is, the harder its mass is to measure. Planet mass is usually measured via the radial velocity (RV) method. The gravitational attraction between a planet and its host star causes the star to ‘wobble’ as it is orbited by its planet, by an amount that depends on the planet-to-star mass ratio. We can measure the line-of-sight component of the star’s motion via spectroscopy. Massive planets orbiting small stars are easiest to detect via the RV method; maximising the planet-to-star mass ratio maximises the signal, so Earth-mass planets orbiting Solar-mass stars are not easy targets (small planet, big-ish star). Thanks to the Kepler mission, plenty of Earth-radius exoplanets have been discovered in the last five years. Unfortunately, many of these planets orbit stars that are too faint to get high signal-to-noise spectra – their masses won’t be constrained via the RV method until technology significantly improves.

Hoping to improve our chances of finding Earth 2.0, the authors of this paper propose an alternative method for measuring planet masses, in which they infer the mass of a planet by observing its atmosphere. They call their method ‘MassSpec’. 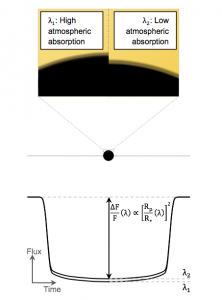 Atmospheric pressure drops with altitude – that’s obvious here on Earth (especially to observational astronomers). It’s why water boils at 80o up mountains and why your ears pop on planes and, unsurprisingly, it’s true on all planets. The rate at which pressure falls off with altitude, or the pressure profile, depends on the surface gravity, g of the planet, which in turn depends on its mass.

There is an equation which relates the mass of a planet to its scale height as well as its radius, temperature and the mean molecular weight of its atmosphere. So if you can measure a planet’s radius from its transit light curve, temperature via emission spectroscopy, scale height via transmission spectroscopy and make a good estimate of its mean molecular weight, you can infer the planet’s mass.

The authors apply MassSpec to HD 189733b, an extremely well studied hot Jupiter with a known H/He dominated atmosphere (which tells us the mean molecular weight) and an established temperature measured from emission spectroscopy (1300 K). They calculate a mass of 1.15 Mjup, which agrees with the value measured via the RV method: 1.14 ± 0.056 Mjup (although, unfortunately they don’t provide an estimate of their uncertainty).

De Wit and Seager predict that MassSpec will be applicable to Earth-mass planets once the James Webb Space Telescope (JWST) begins observations (launch date 2018). JWST will carry a state-of-the-art spectrograph on board and with 200 hours of observing time, it could constrain the mass of an Earth orbiting a small star at ~ 15 parsecs away. 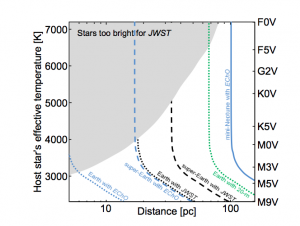 Figure 2. This plot shows the kinds of planets MassSpec could provide mass constraints for, given 200 hours of observing time. JWST could measure masses for Earths and super-Earths up to the distances shown by the black dotted and dashed lines, respectively. The letters and numbers on the right denote stellar spectral type.

200 hours of JWST time is a lot. If you can dedicate that amount of time to obtaining high resolution spectra, won’t you be able to constrain a planet’s mass via the RV method anyway? The authors explain that, although this is true for many stars, there will be some cases where MassSpec will do a better job than RVs. The RV method is suited to low mass stars with massive planets, whereas MassSpec is less sensitive to mass – it mostly relies on brightness. If you have a fairly massive star with a low mass, but low density planet, MassSpec could be the way to go. For low-mass planets the RV method is often limited by stellar activity, which can mask planetary signals. MassSpec will be less affected by stellar activity, again giving it an edge over the RV method in some cases.

Will 200 hours of JWST time realistically be granted to attempt to constrain the mass of a small planet via an unproven method? I’m not so sure. But regardless of practical considerations, MassSpec is a neat, simple idea with great potential (and if astronomers didn’t get ambitious once in a while, we may never have detected exoplanets in the first place).